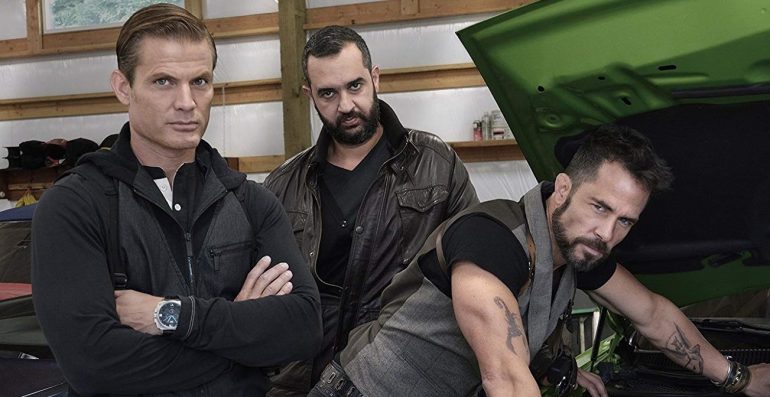 Idaho is now available on Showtime where I recommend everyone watch it there or take a chance on life and just buy this easily rewatchable flick. I’ll certainly seek it out again to soak up all the plot twists, visual atmosphere and brutal fight scenes.

Plot: Last Seen in Idaho is a twisted Action-Mystery Neo-Noir mix directed by actor Eric Colley (The Last Rescue) and written by lead star Hallie Shepherd (Bayou Caviar). It revolves around an amnesia stricken middle-class yet streetsmart gal, Summer, who witnesses a murder by a mysterious gang of assassins but after a sudden car wreck, forgets everything that happened that night. All she has are clues that she or her sister (newcomer Alexis Monnie) will likely be murdered soon as well as encountering suspects such as gang leader (scene-stealing Shawn Christian, Days of Our Lives), charming mystery man Franco (Wes Ramsey, Charmed), reelection seeking Mayor Clay (Richard Carmen, ZMD: Zombies of Mass Destruction), psychotic hitman Brock (a career-best Casper Van Dien, Starship Troopers) and bizarre Det. McNeely (Ted Rooney, ER).

Review: This film makes use of every scene and is to be applauded for never dragging out scenes or being overcomplicated like most indies with over 5 characters. From scene one we are expecting a gritty action-packed mystery made by movie lovers such as ourselves. The plot twists are surprise aplenty to where if you predict one, you still won’t predict the next five twists and it feels like it was meant to be that way as opposed to another post-Usual Suspects hackneyed mess. The best way to describe it honestly is a mash-up of Memento (only with less repetition, more suspects and more action) meets Run Lola Run (messy catastrophes envisioned by a female protagonists who’s merely trying to survive).

The lead character Summer also reminded me of sort of a mix between the typical average Joe Action heroine (the best kind mind you, not the unconvincing wimpy kind) and more like a normal version of Nikita (only she’s surrounded by criminals and learns how to kill based on instinct versus secret government training). I hope that actress Shepherd gets another chance to do more mixed genre films of this ilk. The cinematographer Bryant Jensen (Poppy music videos) should also be given several high-fives for his professionally handled camerawork as the visual look truly helped craft the mood and easily rival the likes of John Wick and A Quiet Place in appearance. And last, but not least, Casper’s character was truly the icing on the cake to where even the most nitpicky, non-Action fan critics who’ve never liked him are going to struggle to critique even this performance of his as there’s no one else who could’ve pulled off this stone-cold, rape tempted demented man.

Idaho is now available on Showtime where I recommend everyone watch it there or take a chance on life and just buy this easily rewatchable flick. I’ll certainly seek it out again to soak up all the plot twists, visual atmosphere and brutal fight scenes.