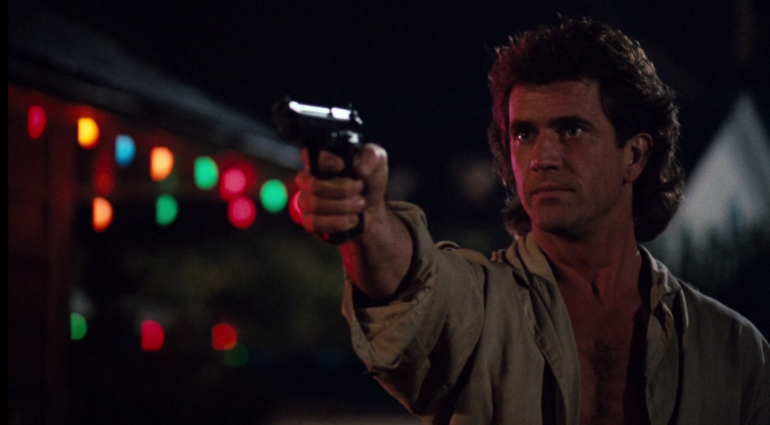 Lethal Weapon is one of the action greats, well acted, well directed and well written; you couldn’t really ask for more.

Review: The Lethal Weapon series is one that I’ve never ventured into before; I’ve been meaning to and this journey into great action films seemed to be the right time. And boy was this a good film.

The plot comes through piece by piece, this isn’t a ‘Stop The Bad Guys’ film. It has a decent plot as the two policemen investigate a suicide and it’s just built up from there. She was poisoned, she had connections to bad people, the bad people worked with her father, her father helped them transport heroin, it’s all realised slowly through the film keeping your interest at a peak as you want to find out more and more.

The film boasts two great performances from Gibson and Glover, the totally different duo are set up separately so we can understand the juxtaposition between them before they even meet. Murtaugh is a family man, he’s been doing this job for years and he’s always played by the rules. Riggs lives in a trailer with no-one but a dog for company, he drinks irresponsibly, he considers suicide daily following the death of his wife and when he’s on the job he just jumps into danger, sometimes literally. The two men work well together with a great back and forth between them, especially after they start to become friends and realise that Murtaugh needs to loosen up and Riggs needs to calm down.

The directing was also really good, the camera moved around a lot, never staying still for long but since this was made before Shaky-Cam the film remains action-packed without making you vomit. In some moments the camera actually feels pretty fluid, the opening scene with the jump manages to follow the body so close you’d think someone actually jumped. The film also used a good number of action scenes, a few gunfights here and there, a house exploding and a fist-fight at the end but what it did brilliantly was keep the film mostly focussed on Riggs and Murtaugh so we got to know their characters better and liked them that bit more.

The score was also brilliant, utilizing a lot of violins and trumpets to keep the audience entertained. If I had to I’d call it a Jazzy score but it fits the film really well, I can’t explain why but it just does.

The main star of this film however is the writing, Shane Black knows how to use dialogue to great effect and it shows even as early as this film. It all sounds convincing and authentic, making these characters all the more real and likeable but he can still pull out a great quote like ‘I’m too old for this shit’ amongst others. By using a lot of normal dialogue the great parts are all the more noticeable making both them and the whole script better as a result.

Overall, this deserves to be one of the action greats, well acted, well directed and well written, you couldn’t really ask for more.