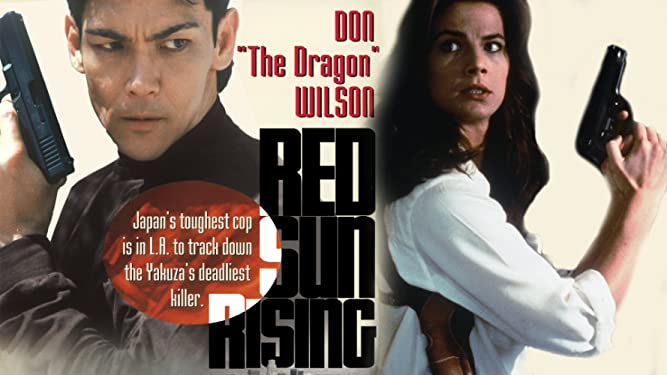 Plot: Thomas Hoshino (Wilson) is a tough Japanese detective, who lost his partner by a deadly Yakuza killer Jaho (Lew). He tracks down the killer and his master to Los Angeles, where he teams up with Det. Karen Ryder (Farrell). Soon they discover that Yakuza prepares a gang war and weapon smuggling. Hoshino must find a way to defeat the killer who posses mystical ninja powers.

Just to clarify I haven’t seen enough of Don “The Dragon” Wilson’s films to form an opinion on his work and the ones I have seen didn’t exactly win me over (though not because of him and more to do with the scripts and directors that he worked with) so when a mutual friend recommended this to me, I decided to check this out and I’m glad I did.

So far, Red Sun Rising is easily my favorite of his films not only because of the action, but this easily has the best cast that’s been assembled for his films which includes Mako, Michael Ironside, and especially James Lew who’s the standout alongside Wilson.

The action is well shot and choreographed for the most part in particular the final fight.

The story admittedly is nothing special and very predictable, but I’ve seen handled way worse in other films so it didn’t bother me as much.

Overall, Red Sun Rising is a solid action film with a good cast, has some decent action, and is well paced; definitely check it out if you haven’t seen it!