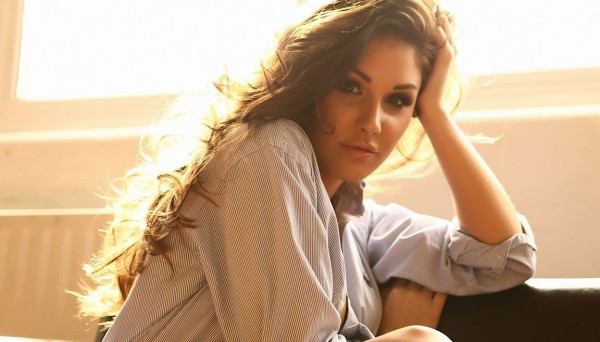 She has also appeared regularly on TV and made her film début in 2012.

We had the chance to catch up with her to discuss her film career.

How have you found the transition from modelling to acting? Any surprises or unexpected challenges along the way?

Modelling is extremely monotonous, so it’s far more rewarding and challenging doing acting work.
My past modelling career can be hindrance when trying to get acting roles but that’s all part of the fun, trying to change people’s perceptions. I really enjoy being on set and the whole process of making a film or TV show.

Your acting debut was in Strippers vs Werewolves and since then you have completed three more films. In a relatively short time, as an actress, how have you grown and what major lessons have you learned?

I’m learning what I’m best at and what I really enjoy, I’ve been lucky to have been given varied opportunities early on in my acting career and it’s been so rewarding having the challenge. It’s great fun too.

We spoke to Andy Collier, your director on The Seventeenth Kind, and he had nothing but praise for your professionalism and performance on that set and film. Playing the sidekick to Tony Curran’s character you were forced to communicate more via body language than words. How different of an acting process in that when trying to convey emotion without taking it to the point of panto?

I have to praise the direction in that one. Andy had a clear vision on Seventeenth Kind and really helped me get to grips with Melissa. Plus the rest of the cast were amazing, Tony and Ralph were very easy to bounce off.

The upcoming action film Warrior Savitri is an action thriller directed by Param Gill and shot in Mumbai. How would you say the Bollywood process differs from the films you shot in the UK?

It was great to have the opportunity to work in India. The biggest difference on set was probably health and safety! Everything turned over very quickly in Mumbai, so shooting was far quicker, the pace helped keep the energy up.
The direction was very different to what I’ve been taught, on a film like this, we could play up to character, being a kind of Bollywood/Hollywood hybrid, performances felt more theatrical which was great fun.

What sort of dancing and fight training was required for your role as Candy and what type of time commitment was involved to prepare?

My dance and fight training was pretty minimal due to the scheduling, a couple of hours on the dance routine and we were pretty much learning as we shot with the fight scenes. I would have loved a few extra days on both. The choreographers for both were phenomenal, they had there work cut out with me! Being thrown in the deep end was quite a challenge but I hope I’ve pulled it off!

Candy is quite a hardened character, she’s a pole dancing mixed martial arts, street smart badass – basically the opposite to myself! The great thing about the film is that the main fight scenes involve women. Param (the director)’s intention with Savitri is to inspire young Indian women to partake in martial arts and self defense training, to show that women can be just as strong and powerful as men.

Tim Man who plays ‘Monk’ is very well known in the martial arts/film world as a performer and stunt choreographer. Did you work with him on any of your techniques?

I didn’t get to work with Tim as we didn’t share any scenes but I’ve seen the footage he and Niharica shot in Rajasthan and he is really incredible. The martial arts in this film are so impressive.

Let’s discuss Age of Kill. Directed by Neil Jones, it is an action thriller and you are surrounded by a cast that is a ‘who’s who’ of British talent. Patrick Bergin, Bruce Payne, Nick Moran, Danny Dyer and Martin Kemp of Spandau Ballet fame. Can you describe that experience?

I got to spend the day with a shirtless Martin Kemp so I’m sure there’ll be a lot of jealous Spandau fans out there! I loved working with these guys, the whole crew. There are some great performances in the film, we had the screening recently and everyone is so proud of this film, I feel lucky to have been a small part of it.

What can you tell us about your character Jenna?

Jenna is a small part in the film but pivotal to the story unfolding ….

Are you a fan of action films in general and if so can you name a few of our faves?

I absolutely love a good action movie, especially the old school ones like Die Hard, The Last Boy Scout, Terminator, Bad Boys…. I’m such a boy!

Any preference to shooting location? India versus UK?

They’re so different, I couldn’t possibly choose! I just love being on and working on a set, it’s such an interesting and fun place to be.

Any upcoming projects in the works you can tell us about and future aspirations?

I’ve got some exciting projects in the pipeline, and I start shooting Separation a horror/psychological thriller with Andy Collier and the team from Seventeenth Kind early next year. I can’t wait. I love the genre and I get to play something a bit different.
I’d really love to do more comedic roles in the future, and I wouldn’t mind a bit more action of course 🙂