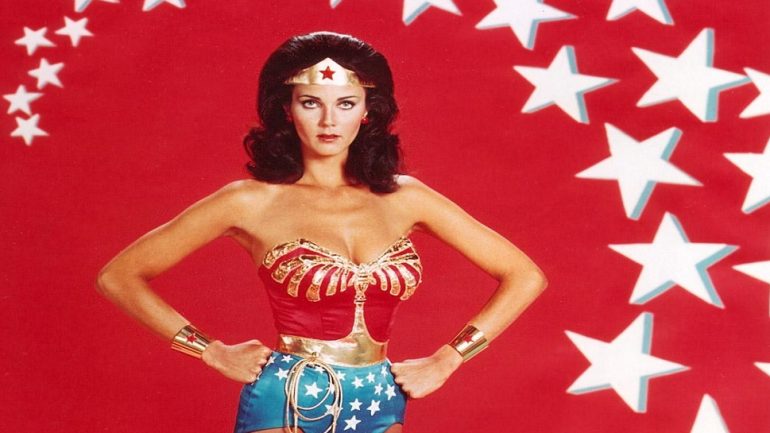 Lynda Carter: The ONLY 'Wonder Woman'

Wonder Woman is a superheroine created by American psychologist and writer William Moulton Marston and published by DC Comics. The character first appeared in All Star Comics #8 in December 1941 and first cover-dated on Sensation Comics #1, January 1942.

The first attempt to bring Wonder Woman to the screen was a failed series pilot in 1967, starring Linda Harrison (Planet of The Apes). The success of the Batman television series led Batman producer William Dozier to commission a pilot script by Stan Hart and Larry Siegel. Thankfully this tongue n cheek version never got the green light, and the pilot was never broadcast. (Those of you who are gluttons for punishment can check out a sample here)

The idea of bringing Wonder Woman to the small screen was shelved until another failed pilot, starring a blonde Cathy Lee Crosby, was broadcast in 1974. Reaction was mixed at best, but ABC still felt a Wonder Woman series had potential, and within a year another pilot was in production. After an extensive talent search, former Miss World USA Lynda Carter beat out over 2000 other hopefuls and was cast in the role as Wonder Woman and her civilian alter-ego Diana Prince. ‘The New Original Wonder Woman’ made its network début on November 7, 1975

Set within the backdrop of World War II, this first season followed the comic books closely (right down to the costume) and saw Wonder Woman fighting Nazis and sinking U Boats. It had a subtle ‘high comedy’ feel but to be honest it was quite hokey. The series began at a time when violence on television was under great scrutiny. As a result, Wonder Woman was less frequently seen punching or kicking people the way she did in the early episodes. Despite good ratings, ABC were undecided on picking the show up for a second season, so the production company, Warner Brothers, entered into discussions with CBS. CBS were interested but only on the condition that the show be brought up to present day. This would lower a lot of the cost of doing a 1940’s period piece, and Warner Brothers agreed. This relaunched the show as ‘The New Adventures of Wonder Woman’ and ran until 1979.

So the last time Lynda Carter laced up the boots as Wonder Woman was 35 years ago. 35 years! So why is it so hard to cast another Wonder Woman? We have seen Batman been played by everyone from Adam West to Christian Bale. The Incredible Hulk (well Bruce Banner anyway) has been on the big screen with Eric Bana, Edward Norton and Mark Ruffalo. Superman has seen George Reeves to Henry Cavill, and the list goes on. My explanation is this; Lynda Carter is Wonder Woman.

Long before the days of Hollywood screwing up almost every major casting, they hit it out of the park when they cast Lynda Carter. Nowadays one cannot have a discussion about Wonder Woman without mention Ms. Carter. It is tough to see where the comic ends and the actor begins. With the possible exception of Christopher Reeve, there has never been an actor who has embodied a comic book character like Lynda Carter did. She was the total epitome of what Wonder Woman was in the comics and everything that fans of Wonder Woman wanted her to be. These days when an actor is cast, we are always warned to ‘give them a chance – wait and see – they will grow into the role’.  When Ms. Carter appears on-screen in that Wonder Woman costume, there is no need for that. We believe she is Wonder Woman without any hesitation.

Not only is she drop dead gorgeous, she emanated a feeling of regality. You really felt as though you were watching an Amazon princess fighting crime.  She played the character with grace, style and dignity, which is rare with female comic book characters, with the majority being portrayed as sex vixens or over the top butch figures.

Even today, many artists at DC have admitted to using Lynda Carter as their inspiration for the Wonder Woman that they draw. So art becomes reality becomes art. Next time you happen to see some Wonder Woman merchandise, take a good look. Are you looking at an illustration of Wonder Woman, or is it a drawing of Lynda Carter?

In 2011 when it was announced that a new Wonder Woman TV series featuring Adrianne Palicki was being filmed, fans around the world let out a collective’ uh-oh’. Luckily, this pilot never got to air but having seen it I can tell you that we did not miss much. The new costume was something from a bad Halloween party and Ms. Palicki is nowhere close to being Wonder Woman.

That brings us to present day and Gal Gadot’s casting by Zack Snyder. I am sure Gal is a….ummmm….lovely gal, but she is once again, not Wonder Woman. Yes, she is a model and no doubt a very attractive lady, but she just doesn’t fit the bill. She looks too fragile. Sure spending time in the gym with a personal trainer will add on some muscle, but no workout can bring what it was that Lynda Carter had.

It has been 35 years since the world saw Lynda Carter as Wonder Woman. She was not the first, she will not be the last, but she will always be the only one.