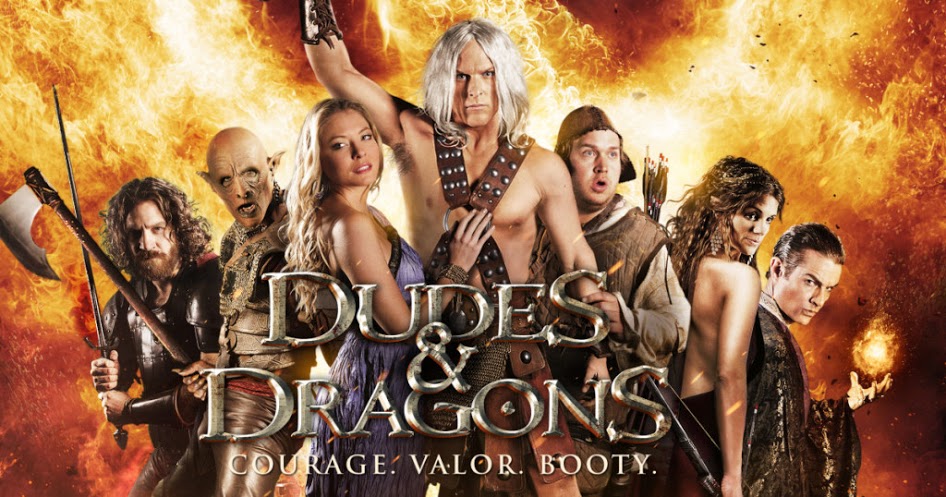 Independent sword and sorcery movies with “Dragon” in the title are seemingly a dime a dozen these days, but filmmakers and actors Maclain Nelson and Adam Johnson have been making “Dragon” movies for a number of years, starting with their debut film Dragon Hunter (2009). Since then, they’ve been involved with several other “Dragon”-titled films, such as Dragonfyre (2013), Dawn of the Dragonslayer (2011), and The Crown and the Dragon (2013), and they’re back with the endearing sword and sorcery adventure / comedy Dudes and Dragons. Nelson stars in the film, as well as co-wrote and co-directed, and Johnson co-stars in it, and they’re a great team on screen. In this interview, they discuss their love of the sword and sorcery genre and bringing both Dragon Hunter and Dudes and Dragons to the screen.

Adam: You have fine taste, my friend. You have good taste in dragon films.

Every time I go to Wal-Mart, I always look at the new videos, and it seems like every time I check, there’s a new movie with “Dragon” in the title, right? There was a really good one called The Crown and the Dragon, which I think one of you guys was involved with.

Maclain: Yeah, that was with another company I have. We made that film. Adam has a part in that one. No, wait, that was Dawn of the Dragonslayer.

See, that’s what I’m talking about. That, in itself, is what these movies are sold on. You’ve gotta have “Dragon” in the title. You’ve got to say something about that.

Maclain: It all started with Dragon Hunter. That movie was a crazy experiment. My friend Stephen Shimek, who is the co-director and co-writer on Dudes and Dragons, was a student at the university that I’d just graduated from, and we thought that there was room for a low budget dragon movie. There weren’t many of those kinds of movies on the indie level because they normally take such huge budgets. There’s a big audience for it, so we thought we should try something like that for that audience. We met up with some of the CGI guys who were going to that school, and they said, “Hey, we think we can make a decent looking dragon.” I was teaching a graduate level class for filmmakers, and Steve was in the class, and we set a challenge and said, “Hey, if someone comes up with a decent idea, we’ll fund it.” We basically did it on a shoestring budget. I think we spent $90,000 on Dragon Hunter. We strung together whatever we could, and we had the CGI guys work on it. You saw the film. It is what it is, but it has some decent moments in it. People liked the characters. It sold quite well. It was well received. It started us down this road. There is a place for non-Peter Jackson level fantasy films.

Adam: I played a small, supporting role in Dragon Hunter.

Maclain: He plays one of the sidekick, comedic characters who gets killed early on in it.

It’s very clear – at least to me – that you guys have an affinity for the D & D culture. It shows in these movies you’ve been making. These movies feel like filmed sessions of live action role-playing. Dragon Hunter isn’t nearly as fun as Dudes and Dragons, but it’s like a very serious D & D session. Did you guys grow up playing role-playing games?

Maclain: Yeah, totally. These were inspired by – at least for me – by my love for fantasy films of the ’80s. I probably watched my VHS copy of Willow until it wore out. I probably watched The Princess Bride a thousand times. All these wonderful fantasy movies we had in the ’80s. Labyrinth, Star Wars. Those movies stuck with me forever. That got me going into that world. It translated on into The Lord of the Rings. My brothers and I would watch the extended versions of The Lord of the Rings every Christmas. I wasn’t a hardcore D & D guy growing up. Some of our producing partners were. I only dabbled in it. I’ve actually started playing a lot more since. There was just something about those movies that stuck with me. I loved them. There’re never enough of them.

Adam: I’m a little embarrassed to say that I’d never played D & D until after making these movies. I have an older brother who would never let me be caught dead doing something like that. However, I was huge into He-Man. I had Castle Greyskull and Battlecat, I had Battle Armor He-Man, I had them all. I was one of the first guys in my town to get Nintendo. My first love was Zelda. But I also loved The Princess Bride.

Adam: I had a love for those kinds of movies as well. Just a couple weeks ago I played my very first game of D & D. I had a blast. It’s really fun. Maclain and I met doing improv 15 years ago. When I started playing D & D, I went, Wait a second! D & D is like improv. It’s so much fun.

Have D & D players been coming out of the woodwork and giving you guys feedback on these movies you’re making?

Maclain: They definitely are. People are reaching out, the fan base is growing. It’s been really great to have James Marsters in the cast of Dudes and Dragons because he has such a large Comic Con audience. People are seeing the movie because of him, but then they’re realizing that we’re hitting the nail on the head. There was even a Dungeons and Dragons movie that wasn’t well received. What we kind of bring to every movie we do is … Adam and I have been friends for so long that there’s a great camaraderie that comes through on screen. Some people have a game crew that gets together every week, and that’s Adam and Steve and I. We have history. Someone told us, “Watching Dudes and Dragons is almost like peeking into a group of friends who’ve known each other forever, and getting to be with them for two hours.” We have great chemistry. That’s been the key to why people are latching onto this. It’s authentic. People have told us that we remind them of their group of D & D friends.

Adam: It was a complete 180. With Dragon Hunter, we shot it partially in my backyard in Utah. Granted, we had 28 acres to shoot on.

Maclain: To give you an example … with The Crown and the Dragon and Dawn of the Dragonslayer, we shot those in Ireland. That was awesome because the backgrounds are amazing. You can’t beat that.

Adam: You can’t point the camera in a wrong direction.

Maclain: But when it came to the point when Dudes and Dragons came together, it had a bigger scope and the script was bigger. To go shoot on location we knew we would need even more of a budget than we thought it might end up costing. Because it was a huge fantasy world, we had our CGI team and everyone else get together to talk about it. My co-director Steve Shimek has such a technical mind. He said, “I think we can shoot this in Utah in a studio, if we do things right and plan everything out.” He wanted to use that technology, which has grown so much in the last few years. In a way, we bit off more than we could chew. We were overly ambitious, as far as thinking we could do as much as we wanted to do in the time frame we had. It took longer than we thought it would. We shot for 25 days. Usually, we don’t get that much time. We are the first micro budget movie to shoot all in green screen. It’s a huge feat and we’re really proud of it. You can tell it’s not The Lord of the Rings with a budget like that, but it fits with the theme and the mood and the tone of the film. It adds to the hominess and the familiarity of good fantasy films.

Dudes and Dragons borders on a spoof. It has fun, but it doesn’t “make” fun of the genre. That’s important. And it’s surprisingly clean. It’s not Your Highness, thank goodness. Thanks for making a fun fantasy film that doesn’t make fun of everything.

Adam: You earlier compared it to Dragon Hunter. While we were shooting that movie, we were always joking around on the set. We could have very easily turned it into a comedy. If we’d slightly adjusted the dialogue, it would have been funny. Even back then, we had that concept to have fun with the genre. It’s important for us to not mock the genre, but to have fun in it.

Maclain: It was very important while I was writing it that it be an homage rather than a spoof. We wanted it to be a comedy. We needed people to know that we love this genre. I felt that Your Highness was trying to make fun of the genre and show how goofy it is. We approached it with love. We played it serious and didn’t wink at the camera, even though some of the situations are ridiculous, we played it serious.

Adam: In the world we were pretending to be in, we thought there could be stupid people.

Well, guys, I really hope you continue making movies in this genre. What else would you like to say about Dudes and Dragons?

Maclain: Anyone who grew up loving The Princess Bride, anyone who grew up loving Willow and fantasy movies that defined a generation, this is our homage and love letter to those movies, added with new technology and what we have today. We spent four years of our life on it. We just hope that people will see it and share it. Enjoy the experience we had making it. We hope the joy and love we put into it will be translated into the experience of watching it. If people want to see more indie movies like this made, we need people to rally behind it.

Adam: Give it a shot, give it a chance. We really loved making it, and I think that will come through.

Not that Dudes and Dragons needs a sequel, but there certainly could be one. Would you guys like to do more movies like this?

Maclain: Yes, yes! We love these characters. I’m even developing a T.V. series around them. If this goes well, you’re going to see a lot more of these characters. We will keep bringing it if people will embrace it. This is what we love doing.