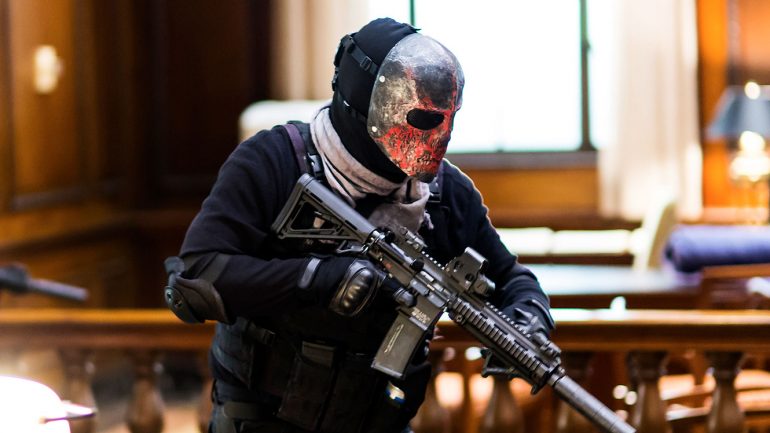 I liked Marauders and if you are looking for a fun action thriller with a bit more to it than your standard fare, I would suggest checking it out.

Plot: When a bank is hit by a brutal heist, all evidence points to the owner and his high-powered clients. But as a group of FBI agents dig deeper into the case – and the deadly heists continue – it becomes clear that a larger conspiracy is at play.

Review: I know what you are thinking so let’s just get that out of the way. Yes, Bruce Willis is the largest character on the poster and yes, he has the least amount of screen time.  Having said that, he plays a vital character and his performance has some of that classic attitude that fans know and love.

Marauders features a cast including the aforementioned Bruce Willis, Dave Bautista, Adrian Grenier, Johnathon Schaech and Christopher Meloni.The film really belongs to Meloni (as FBI Special Agent Jonathan Montgomery ) and Schaech (Cincinnati PD Officer Mims). Both emotionally damaged law enforcement officers with their own reasons for catching the bad guys, a group of masked bank robbers who leave a trail of bodies, cash and clues in their wake. Hubert (Bruce Willis) is the big bad whose banks are the ones targeted by the team of robbers. Bautista in a bit of a different role, plays wisecracking FBI Special Agent Stockwell, who is very much Montgomery’s right hand man. Entourage’s Adrian Grenier rounds out the cast as Wells, the fresh faced new kid who has joined Montgomery’s team who are tasked with tracking down our heist masters.

The film has some nice stylistic touches; from the bank heist crew with their super creepy Deathstroke-ish masks, to some sweeping exterior shots in the rain, director Steven C Miller makes the most of what he is given and it shows. The only real faults lie in some of the editing and a somewhat convoluted plot, that although does come together at the end,  a few ‘give me a break’ moments and plot holes could have been trimmed in the third act.

Overall I liked Marauders and if you are looking for a fun action thriller with a bit more to it than your standard fare, I would suggest checking it out.