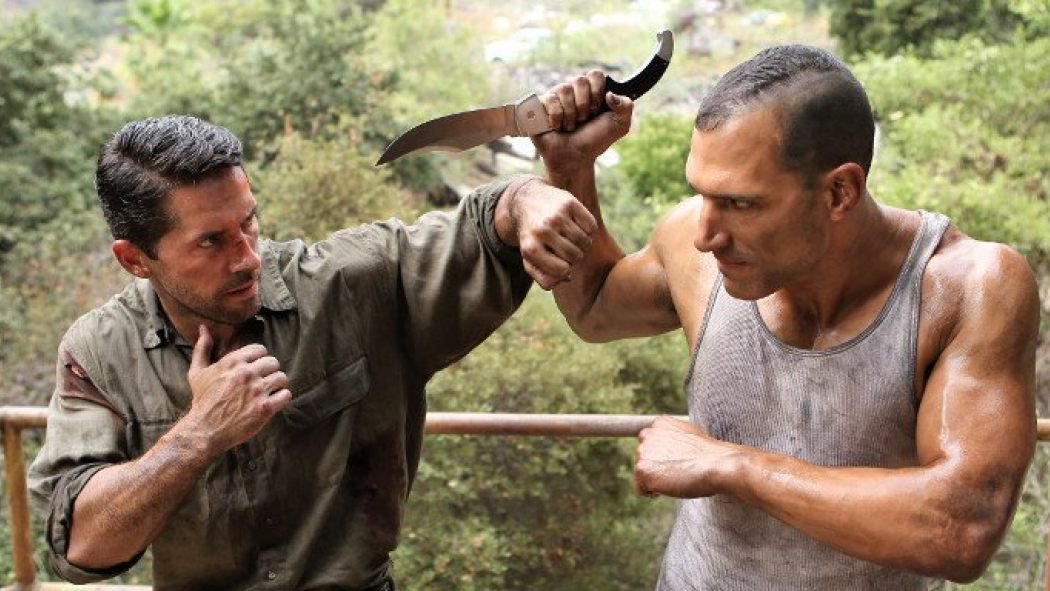 With the impending release of Savage Dog, as promised here is part 2 of the massive Marko Zaror interview.

Sit back, relax, and prepare to get SAVAGE!

Talk about how you prepared for the role of Rastignac and shed a bit of light not about the plot but about his back story.

Savage Dog, what a great experience. It was to shot this past year and that Jesse trusted me with the role, because it was a very challenging role. I can say it was the most challenging role of my career for sure. I have known Jesse for 18 years since when I first moved to L.A. The first time I arrived to L.A. We met on the Universal Lot Jesse was directing a movie called ‘Pit Fighter’. Recently I returned to L.A. And Jesse said Marko, I have a role for you for a new movie, then I read the script and I saw this crazy, crazy role. I was like wow it is the first time I was going to have a large amount of lines and big acting scenes on an English speaking movie, a very heavy character with a dark past. It was a great opportunity for me I just took it! I loved the story, It looks amazing. The movie is solid and beautifully shot, Jesse did a great job directing. He told me he was very happy with the movie. I look forward to the U.S. Release. I am sure you guys will be surprised as it is a totally different role or character for me. It is such a unique movie.

Chat about the action in Savage Dog.

Working with Scott Adkins, is there a certain level of respect when you guys are together?

I met Scott in ‘Undisputed 3’ I know that movie was really popular, and the fight we did together was very well received. Scott is an incredible human being, he was so cool with me when we first met in undisputed 3, of course as a martial artist at the very beginning there was a bit of tension. Then we just started working hard and developing the best fight scene we could possibly do. Undisputed 3 was a unique experience Scott and I stayed in touch after the film, we chatted once in awhile. I am so happy to see how his career has taken off. When Jesse came to me with Savage Dog and wanted me to play a prominent role, I of course said yes. I always love to work with people who can inspire you, and you admire and are just all around good human beings. I think Scott is one of those people. Even though Scott and I worked together, the dynamic is Savage Dog is such a different movie, a totally different world we can do something unique. That is why I am so happy with this film as Savage Dog is so wild and different. I told Scott, next time we work this is the last time you beat me in a fight haha! If I am not your friend then I am gonna have to beat you up.

For me as an action lover and having supreme respect for JuJu Chan, I am curious of you thoughts on her, she has a real honor and respect for the legends of Martial Arts. I am super thrilled you had the opportunity to meet an work with her.

JuJu is a very nice girl, we spent more time outside the set than on set. We did not have many scenes together, we met on set and we were like hey lets get together with the team of the movie. I was able to get to know her more. She went with me and some friends to see ‘Sultan’ when ‘Sultan’ was premiering in L.A. That is how I got to know here she is really nice. She is very humble and at the same time she is so talented. She is a bad-assed martial artist. I haven’t worked with her on set much. I am looking forward for that. I always told her if you need someone in China to do a movie with you than I would love to be that person, she seems like a good person to work with.

Same question with Cung Le, chat about working with him.

I spent more time on the set of Savage Dog with Cung Le he is very talented of course. Cung Le is a big inspiration. His transition from the UFC to acting becoming one of the best fighters doing movies. He is just so talented. He has amazing charisma and he is a nice person also. Very humble. He has an inspiring career and inspiring life. from being so successful in his fighting career, now to be successful in the movie industry. I really admire him, we get together and cook one day, along with JuJu. It was a fun time.

Chat more about Jesse and the relationships forged after Savage Dog wrapped up.

I am really honored to be in Savage Dog and am so happy he is doing great now with his new projects. What happened with Savage Dog, is Jesse put together not just talented actors but good human beings, people with good hearts. You can see that in the movie, it will come across on the screen. That is the magic of Savage Dog and the lasting friendships we forged. It will be an experience I will for sure never forget.