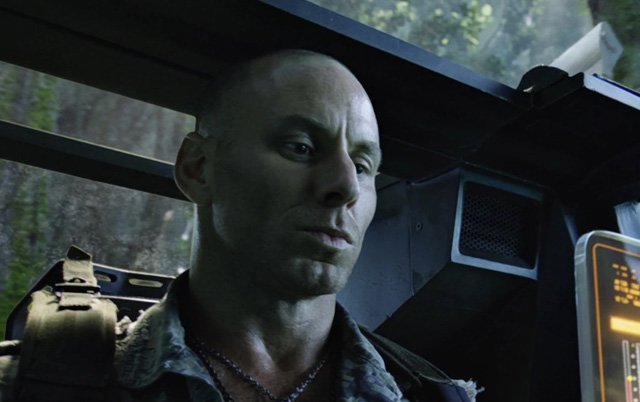 Matt Gerald is an American actor and screenwriter, probably best known for his roles as Corporal Lyle Wainfleet in James Cameron’s sci-fi thriller Avatar, as elusive predator Ray Speltzer on Showtime’s Dexter, and as Melvin Potter on the hit Netflix show Daredevil.

What first sparked your interest in becoming an actor?

I first became interested in acting right after college. I was living on Miami Beach and this gorgeous Australian model I was digging was doing Burn This by Lanford Wilson at a small local theater and asked me if I wanted to help out as a stage hand. I said “Are you kidding me? Of course I do. I love stagehanding” (she was really hot). So I spent the next 4 weeks working the theater and watching these wonderful, inspired performances, thinking to myself… “I could do this”. Within a year I was in LA studying and grinding.
P.S. Nothing ever happened with the girl. Naturally she was hooking up with the guy playing PALE.

Is there anything you specifically look for in a character when you receive a script and agree to the role?

When considering a role I like to ask a few specific questions. 1) Is the piece well-written? 2) Is the character well-rounded with meaningful impact? 3) Does the project shoot in either Hawaii, Australia, New Zealand, South Africa, New York, New Orleans, or London? Yes to any two of these questions will generally suffice.

You have a very rugged look and as such you get cast a lot as a mercenary or law enforcement. Your role as Melvin Potter on Daredevil was a real revelation to me as you got to be a tough and skilled fighter but emotionally vulnerable. That must have been fun to play…

Given that I have played many military guys and baddies it’s definitely refreshing to get an opportunity to step into the skin of such a dynamic, sensitive creature as Melvin Potter. He’s a master craftsman with the social and emotional development of a child. His vulnerability and unpredictability make him utterly fascinating and I can’t wait to see what the writer’s have in store for him.

Will Melvin return for Season 2 and if so do you think ‘The Gladiator’ will make an appearance on the show?

Only the Marvel Gods can tell you that.

It was recently announced that you’ll play a parole officer in the upcoming ‘Shot Caller’; are you able to provide some details on the movie and your character?

I just finished shooting Shot Caller with Ric Roman Waugh and a stellar cast led by Nicolaj Coster-Waldau, John Bernthal, Lake Bell, Omari Hardwick & Benjamin Bratt. It’s the story of a newly released prison gangster who’s forced by the leaders of his gang to orchestrate a major crime with a rival gang on the streets of Southern California. It’s gritty. It’s real, and it’s bad-ass. It’s the kind of movie I grew up loving (a la Bad Boys (Sean Penn not Will Smith), State of Grace, and Colors) and the kind of movie I wish there were more of today. Watch out for Ric Roman Waugh. If he’s not on your radar with his films Felon & Snitch, he should be. He’s a beast of a director.

You have now appeared in three films with The Rock. Can we officially say that you are his good luck charm?

Even after 3 movies with The Rock I’m not so sure we can call me his “official” good luck charm, just yet. Besides I think he prefers the terms ” body-building mentor” and/or “life-long muse” anyway. All kidding aside, there’s no harder worker and more consummate gentleman than Dwayne and it’s been a blessing to go to work with him on three different projects. And I have a suspicion there will be more in the future.

You’ve done some huge blockbusters like Avatar and San Andreas, but you’ve also done smaller projects and TV shows; do you have a particular preference?

I’ve been fortunate to work on huge blockbuster films with giant budgets, small films and tv shows, and seemingly everything in between. They all have their charms. In fact, after shooting Avatar I returned home to do a four month run of an ensemble comedy at a local theater in Los Angeles. We did 50 sold-out shows in a row and I had almost as much fun doing that as the five months I spent in New Zealand and subsequent year back in LA shooting Avatar. If I had to pick one it would probably be big movies, but having to pick one would suck. I love them all.

You have appeared in a lot of shows and films in a relatively short period of time. Are there any actors or genres that are favourites of yours that you have not yet worked on/with but would like to?

The one genre of film I haven’t done yet but would like to do is sports. A retired athlete or crusty ball coach or something. I loved sports movies as a kid: North Dallas Forty, Field of Dreams, The Fish That Saved Pittsburgh, Slapshot etc. Hopefully one of those roles will come along while I can still throw. In terms of actors I haven’t had the pleasure of working with yet, there are the obvious ones – Oldman, Pacino, Sean Penn, Denzel, Streep, etc. But I’ve been incredibly blessed in my career to work with some of the greatest talents we’ve ever seen both in front of the camera and behind, so I’ll harp on that instead.

What advice would you give to someone reading this and wanted to try their hand at acting?

To someone reading this who is thinking about “trying their hand at acting” I would suggest that there are better things to “try your hand at” like Indonesian cooking or macrame. But for those who are seriously passionate and don’t see themselves doing anything else in life, I advise you to focus on the work, get a thick skin, and stay committed. This business is not for the weak and weary.

Desert Island Question: You’re going to be stuck on a desert island for an indefinite amount of time, and you can only bring a handful of items. What three foods, three DVDs and three CDs would you bring and why?

Three Foods: Bananas for sustenance. Oysters to keep it sexy. Flan for desert.