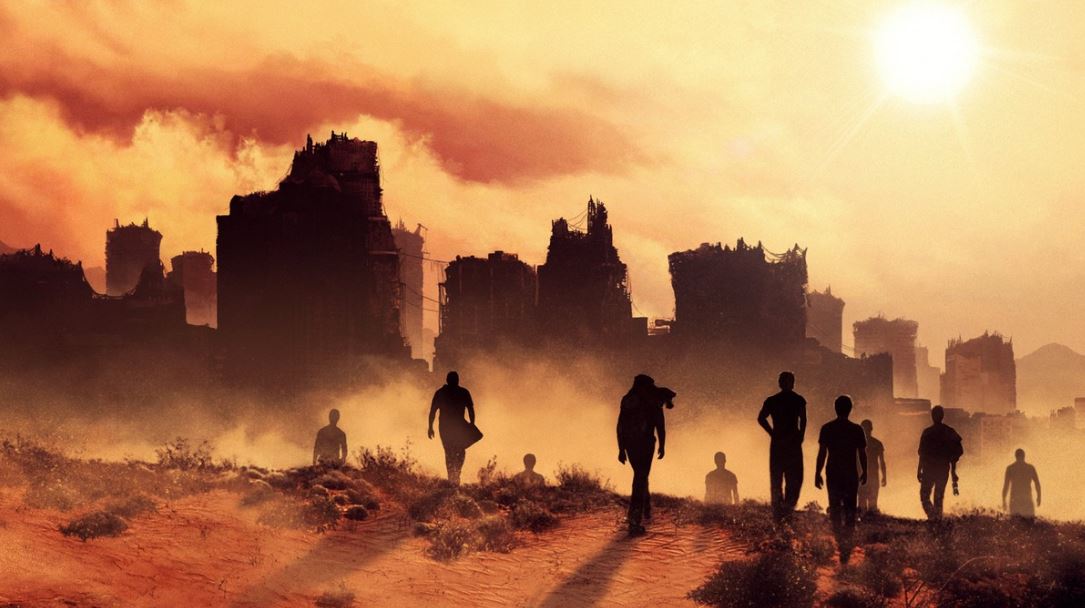 While unapologetic completists may feel compelled to slot it in next to the CD of the first Maze Runner soundtrack you would be easily forgiven for taking a pass this time.

Review: And here we are again, dear fans of post-apocalyptic films and soundtracks to those films. I recently reviewed the soundtrack to Extinction, a less-than-stellar end-of-the-world zombie movie, and now here we are just a few weeks later to revisit the apocalypse with the sequel to the interesting action-adventure The Maze Runner, which was set in a world where a bunch of teen boys and a teen girl were trapped in the confines of a glade, surrounded by a changing series of mazes. As it turned out, the whole thing was an experiment to toughen up the kids to face the post-apocalyptic world (devastated by solar flares) outside. The film was a big enough hit to warrant a cinematic sequel (both are based on books by James Dashner), and released almost exactly one year later, The Scorch Trials has arrived.

After escaping the glade held together by a series of impossible mazes, Thomas (Dylan O’Brien) and his team of peers (which includes a girl named Teresa, played by Kaya Scodelario) are put into a safe, indoor research lab run by a scientist named Janson (Aidan Gillen), who takes orders from a distant overseer seen in a hologram. Right away, Thomas and his crew are experimented on and tested, and Thomas lets his curiosity get the better of him and he breaks out of his confined quarters at night and finds out that Janson and his nameless minions are harvesting DNA from other kids from other mazes to come up with a cure for the zombie virus that has devastated the world outside. Thomas and his friends escape the facility, causing an uproar, and thus begins “the scorch trials” where Thomas must exhibit true leadership as he leads his friends across a sun-blasted post-apocalyptic environment full of devastating hardships, perils, and even betrayal. They encounter sprinting zombies, warlords, marauders, and interesting looking monsters in the sewers. Thomas leads his friends to the mountains where the last bastion of humanity resides, but along the way they join forces with a warlord (played by Giancarlo Esposito), who realizes he has to take a side if humanity is ever going to get a proper reset.

Director Wes Ball hired his composer John Paesano from the first film to do this film as well, and both scores sound almost identical. The music is a product of its time – well produced, but lacking distinction. It fits the film, but it doesn’t really stand apart from the images. Listening to the music doesn’t remind you of the movie, and since the music doesn’t really have any discernable themes, the score can’t find its way to your heart. It’s a good enough score to fit this movie, but honestly, if you switched this score with the first movie I probably wouldn’t even notice.

Paesano has been busy lately. He composed the music to the Netflix program of Daredevil, and somehow that music stayed with me, while his music to both Maze Runner pictures is lost in the shuffle of my mind. As I said, the music for these films – and for The Scorch Trials in particular – is solid and fits the mold of the modern blockbuster, but without a soul or a tie to its maker, the music might as well be a series of CGI effects, alongside all the other enhancements in the movie. Movie music affects everyone differently. I appreciate all kinds of movie music, and I’m happy to listen to something as forgettable as the music to The Scorch Trials, but what I really hope to hear with modern scores is something that has distinction and a soul behind it. I enjoyed the film, but the music not so much.

Sony Classical has released the soundtrack to Maze Runner: The Scorch Trials on CD (it’s also available digitally), and while unapologetic completists may feel compelled to slot it in next to the CD of the first Maze Runner soundtrack (also from Sony Classical), you would be easily forgiven for taking a pass this time. Here’s hoping Paesano’s score for the third film in the franchise is a little more interesting.