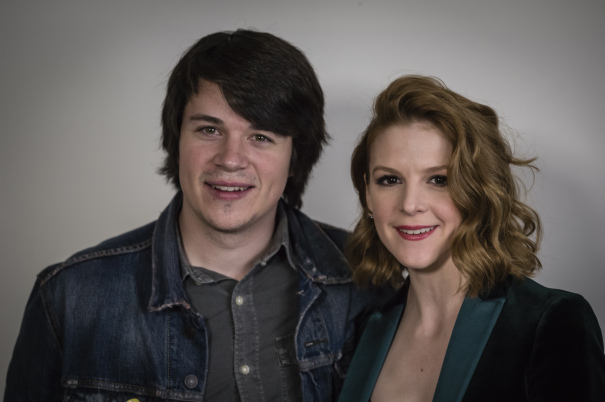 The new action/horror hybrid Carnage Park is a marriage of good indie filmmaking and crossover appeal to a wide demographic that enjoys films like Wolf Creek and The Texas Chainsaw Massacre.

Director Mickey Keating and star Ashley Bell (also in The Day, The Last Exorcism, and Sparks), who plays a woman kidnapped by two bank robbers and gets stranded with them in the middle of a desert highway, and then escapes, only to find herself in the clutches of a madman living in the wilderness, took time out to do the following interview.

Carnage Park is purported to be based on a true story. I couldn’t find any evidence on that, but horror movies tend to say that to drum up business or a sense of reality. How true is this story?

Mickey: Yeah, it’s a combination of several true stories. I think what’s so fascinating about the history of the American desert in a way is all of the crazy shit that happened when it was so easy to get lost. So the jumping off point was when we were out in the area where we filmed there was a story from the ’70s about a couple of guys who robbed a store and they took a woman hostage and then when they found the two bodies of those guys way later, there was no evidence that they’d killed one another. It was assumed that there had to be a third party, and that third party was Wyatt Moss in Carnage Park.

How did you find out about this? Was there a local legend somewhere? Did you visit some bar in the middle of nowhere and some old drunk told you the story from when he was a teenager, or something?

Mickey: I really love stories from the desert, and I love Joshua Tree, so you hear stories. I think we dug up an old newspaper about this particular story. It was really kind of shocking, it was so matter of fact, like, “Well, this happens out here.” I wanted to convey that in a way.

Ashley, your performances are always very physical. Even in the last movie I saw you in, Sparks. You have a tendency to beat people up or get beaten up in your movies. Talk about your performance in Carnage Park where you spend the entire film running around the desert in a housedress and getting beat up.

Ashley: Yeah, I mean I love the strength of this character. I love the fact that she fights and she goes. She uses every ounce of her will to survive. Spoiler alert: But when she gets that first punch out, that was one of the most exciting things I’d read in awhile. Everything else about the script was unpredictable. Then, when you’ve done all your prep and you drive over an hour and a half outside of LA, you see where you’re going to be working, and then it all comes to life. It’s not CGI sand. Sand in a lot of places!

Pat Healy, who plays the killer, is easily one of the scariest movie villains I’ve seen in awhile. Talk about working with Pat on this movie. He’s so deranged in it.

Mickey: A lot of that stuff is very physical. He’s a true, professional actor. I think what was really important for everyone going into the movie was we wanted to be clear that first and foremost, he’s a human being. He brought that to the table. If you’re terrified of him, that’s all Pat Healy.

Carnage Park definitely falls into the horror genre, but it’s also kind of an action/thriller, which is great. I would compare it to Wolf Creek.

Mickey: Thank you. I love Wolf Creek so much.

Mickey: Thank you! Wow! Hopefully we can spark this debate for a long time with many different audiences. Wolf Creek, to me, is one of those movies that you watch and you say, “I can’t believe this movie exists and that they got that.” So it was definitely a reference point, for sure. For you to say that is a tremendous compliment.

California itself plays a part in this movie. We get to see parts of the desert we’ve never seen before. You had some interesting looking sets. Were those tunnels actually there, or did you build that, or what?

Mickey: I had all these things that I wanted in the script. It’s a period movie, and I even had a junkyard in the script, but it’s really tough to come about that. Where we shot it was a place called Koch’s Movie Ranch in Acton, California. It’s a budding movie ranch. They had quite a few things. They had tunnels, they had a junkyard, they had the terrain, and the junkyard had all period cars. Instead of having to ship everything in, it was all there. Hundreds of acres of land to play on. It was a tremendous resource. We were very fortunate. When we were scouting, we spent days exploring places that just weren’t right. We thought for a moment that the movie wasn’t going to happen. Then we drove past a little sign, “Movie Ranch,” and we drove up and it had everything. Literally, they had everything I’d written about in the script. It was surreal. I’m convinced I’m going to wake up to find out that it was a dream. It was too convenient.

Ashley, you’ve done horror before. You did two Last Exorcism movies. Do you like working in the horror genre, or is it something that has just found you?

Ashley: Yeah, I love working in the horror genre, but I truly love working in any genre. Since The Last Exorcism movies, I did my first Broadway play, I’ve done all sorts of things, comedy and lots of action, playing very physical characters. The thing about this script and this film, it’s a thriller like a sniper action film. It’s its own beast. That’s what was so appealing. Even through the preliminary meetings, I heard the sort of music that was going to be used, and the sounds that were going to used, and the landscaping we were going to be in. So, having that opportunity filled the character’s space. We captured lightning in a bottle. It was exciting.

Larry Fessenden is kind of the patron saint of the independent dark genre type of film, and you’ve got him in a small role in this movie. This movie has Larry’s blessing. Talk about getting him involved with the picture.

Mickey: He’s one of my mentors. I worked with him when I was in college, so he’s always been a cheerleader of my work. When I called him up, it’s usually, “Larry, I’ve written this role for you, I don’t want to cast anyone else, will you come out and help me?” He’s pretty good about it. He came out for the entire day, strapped to that bear trap, just hanging out. He stresses the importance of art in cinema. That’s incredibly important. As more filmmakers who’ve been inspired by him become more successful people are going to realize, “Yeah, Larry is a huge, significant force in indie filmmaking.” But also, just horror in general, I feel like.

Now that the film is about to come out, I hope lots of people go to see it. I know you want that too, but who do you think this movie is for?

Mickey: My hope is that … you can never really anticipate it, but I hope lots of people take a leap and decides to see this movie. As many people as possible. That they’re thrown for a loop and are not quite sure what to expect. You’re going to get people coming in on the name alone, expecting a couple things, and then you’re going to get some people who’ve heard about it through any number of ways. Ideally, whatever preconceived notions they have going into it, will end up a little bit different for them. That’s all I can really ask. Go watch it! Ashley Bell kills it!

Ashley: Get scared to death!

Carnage Park will be released theatrically on July 1st from IFC Midnight.