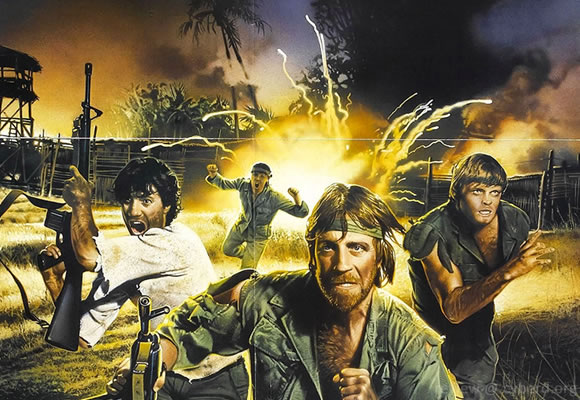 Kino Lorber brings all three films in the Missing in Action franchise together for a handsome box set that fans will be happy to hear are back in print. All three films have been newly rescanned in 2K and / or 4K and the transfers are upgraded from the previous ones available from MGM and Shout Factory.

Missing in Action (1984) Plot: A Vietnam vet on a diplomatic mission ends up stirring a hornet’s nest when he undertakes a mission to rescue some American P.O.W.’s. 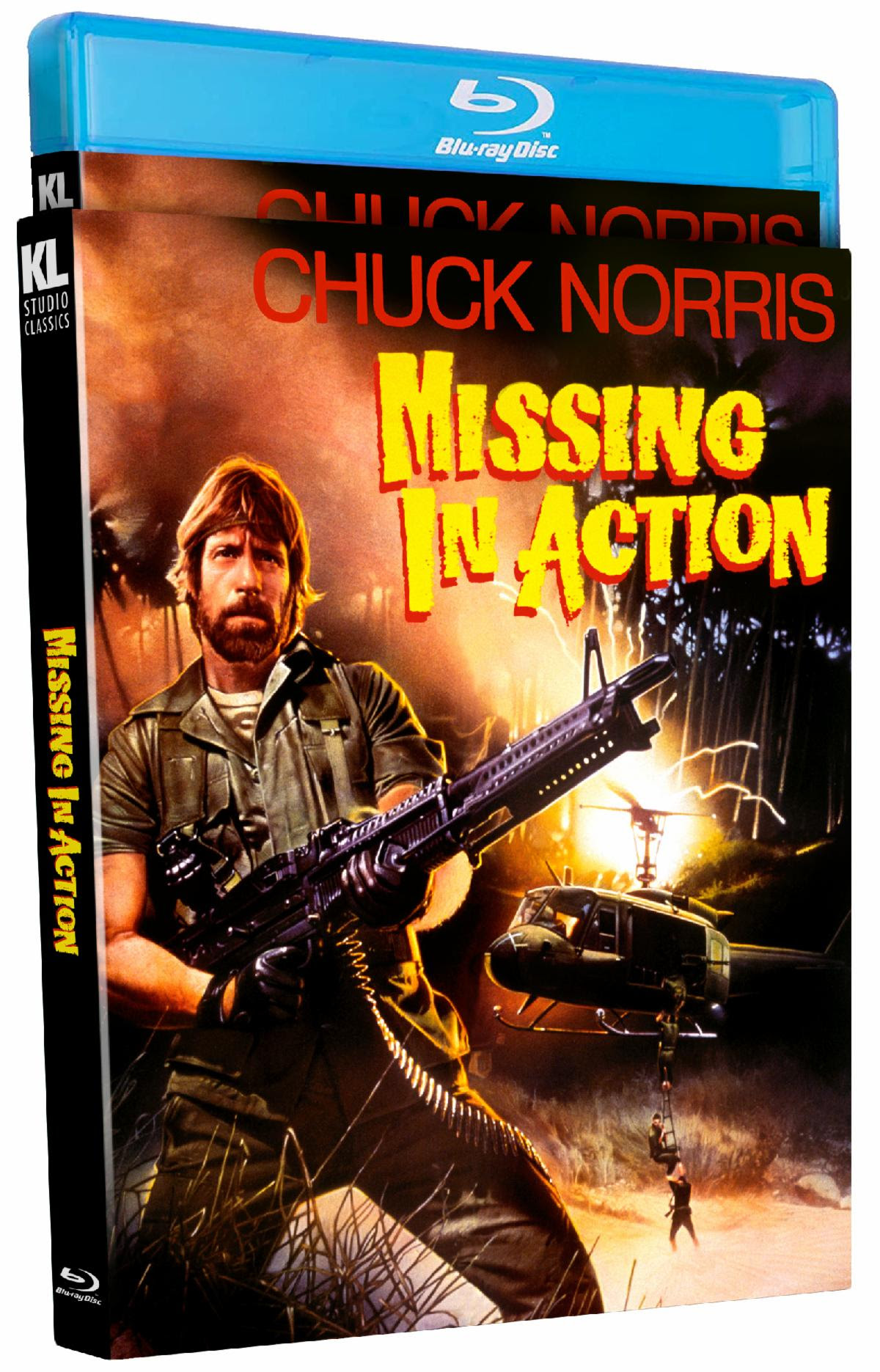 Review: Vietnam veteran James Braddock (Chuck Norris), who suffers from PTSD, agrees to go back to the People’s Republic of Vietnam on a bogus diplomatic mission, where he’s promptly brought up on war crime charges. He sneaks out of the hotel where he’s staying in Saigon and he does some recon work. He finds out that American MIA’s are still being held captive deep in the jungle, and he plans a mission to rescue as many as he can on the sly. He recruits an old expat (M. Emmet Walsh) buddy to help him with transportation through the rivers, and he starts a war with the Vietnamese government, who adamantly swear that no American soldiers are being held prisoner.

Less a martial arts action movie than an out-and-out war film with heavy political implications, Missing in Action is a no-nonsense drama heavy on heroics and casting Chuck Norris as a one-man revenger on the side of right. His scenes as a civilian portray him as an embittered, suffering vet, and when he takes on his mission path, he’s a force of nature to be reckoned with. The war scenes (both in real-time and in flashbacks) are fairly vivid, though stylized through the Cannon filter. The Cannon Group had just begun their partnership with Chuck, who would go on to make nearly a dozen films as their biggest contracted star. Missing in Action 2 and Missing in Action were filmed back-to-back (in that order), but Missing in Action was deemed the better film and therefore released first. The story by Lance Hool and John Crowther was adapted in script form by James Bruner. Joseph Zito directed. He worked with Chuck again on Invasion USA.

Missing in Action 2: The Beginning (1985) Plot: Before rescuing a bunch of P.O.W.s after the Vietnam War ended, James Braddock was himself a P.O.W. and this is that story. 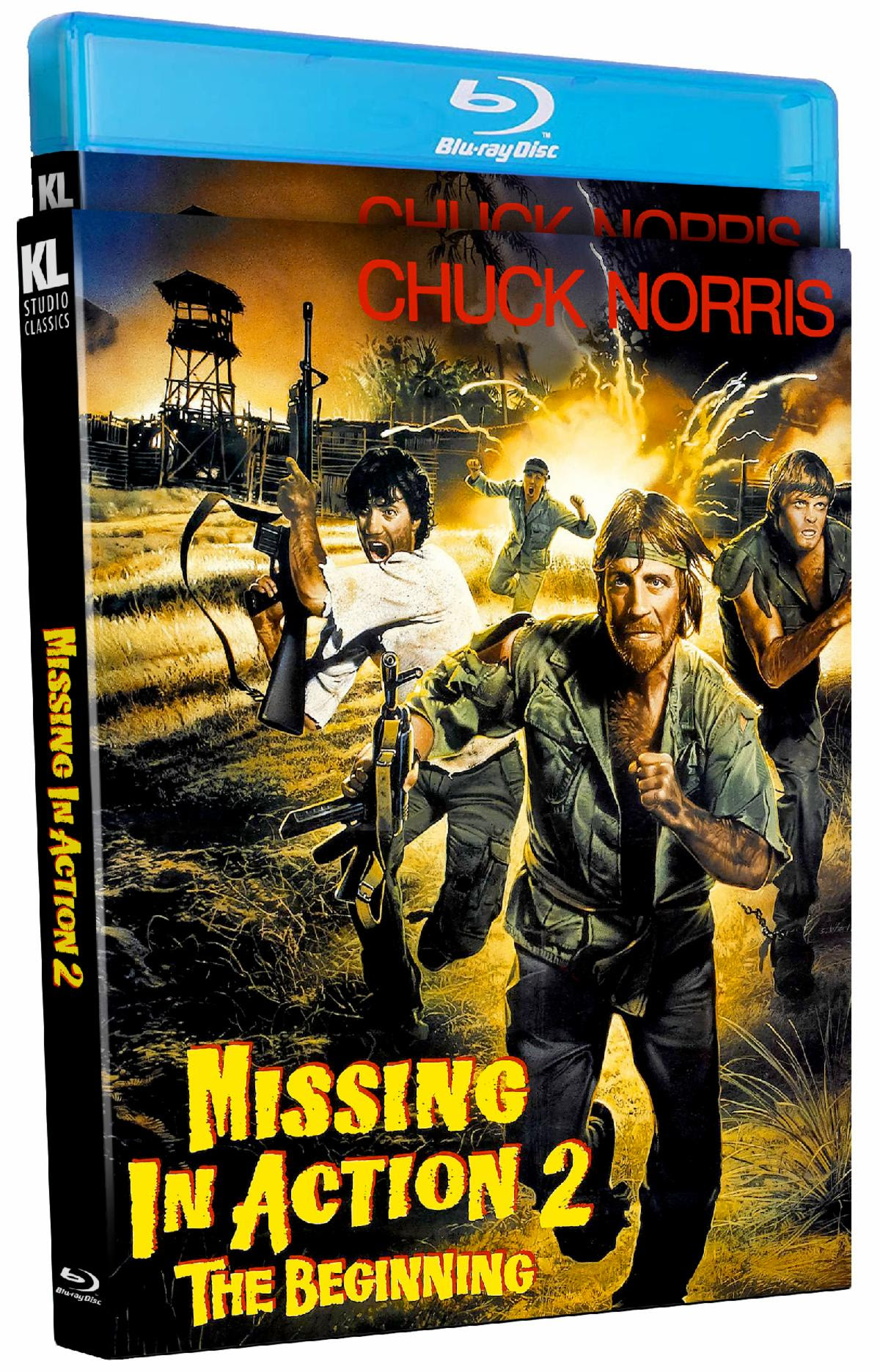 Review: Colonel James Braddock (Chuck Norris) and a platoon of soldiers are captured in Vietnam during a mission, and declared “Missing in Action.” They spend years in captivity under the rule of a vindictive and evil Vietnamese Colonel named Yin (Soon-Teck Oh), who has a personal grudge against Braddock because he won’t sign a bogus confession declaring that he’s a criminal. Yin holds Braddock’s team responsible for Braddock’s obstinacy, and tortures them day in and day out for years on end. After years of grueling and inhumane treatment, Braddock finally snaps when Yin tricks him into signing the confession in exchange for medicine for one of his men who has malaria, but Yin kills the defenseless guy anyway. Braddock plans his escape, and when he’s free from the prison, he builds up his strength and an arsenal to annihilate his captors and level the prison camp, while setting his fellow inmates free.

Filmed before Missing in Action, but released after it, The Beginning is tough to watch at times, and I’d hesitate to call it “entertaining.” It almost feels like exploitation at times (actually it is exploitative in some ways), but if you’re looking at it from an action movie perspective, it has some redeeming qualities. Norris is good in a pretty thankless role, and his co-stars (including Oh, who plays a horrible villain) are all game for what amounts to a prison camp movie with some payoff. It’s easy to understand why Cannon (which produced all of the Missing in Action movies) decided to release this one second even though it was intended to be the first. Lance Hool directed. Braddock: Missing in Action III was next.

Braddock: Missing in Action III (1988) Plot: Braddock can never rest even in peacetime, as he’s spurred into action one last time, only this time with the honor of his family on the line.

“I don’t step on toes, Littlejohn. I step on necks.” 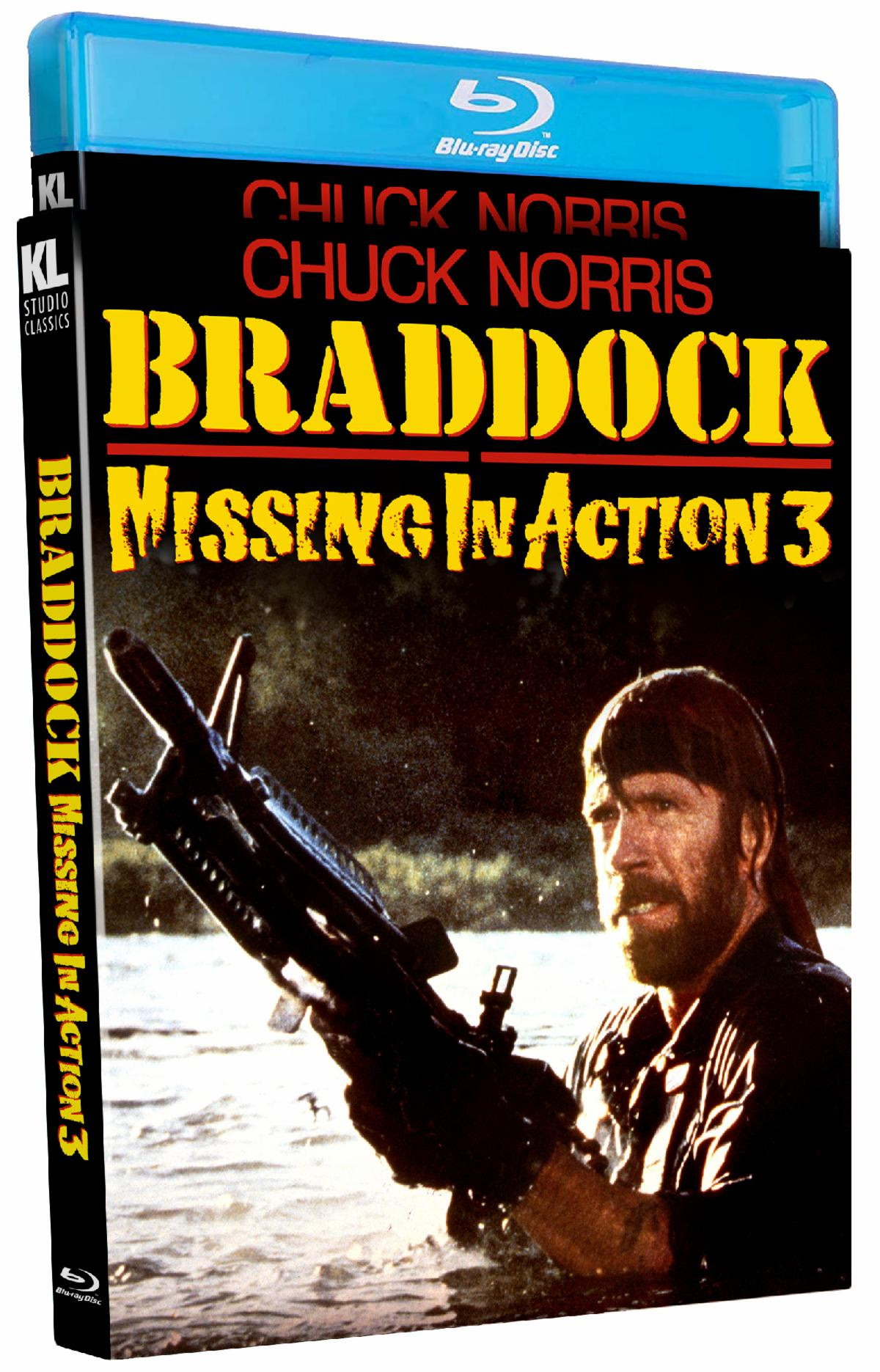 Review: James Braddock (Chuck Norris) doesn’t leave Vietnam right away after fighting his way out of captivity (see Missing in Action 2: The Beginning), and he falls in love with a local woman and marries her. During an emergency evacuation out of Saigon, Braddock is separated from her, and he mistakenly believes that she was killed in a fire, so he returns to the States, where he resumes his life. More than a decade later, he is told that his wife is still alive in Vietnam and that he has a son too, which is enough news for him to return to Vietnam to find them. He is told that his family is living behind enemy lines and the only way for him to get to them is to venture into enemy territory. He gears up and prepares for war, and when he finds them, they are all captured and his wife is straightaway murdered in front of him and his son. He’s tortured by another evil general – this one named Quok (Aki Aleong) – and his son (played by Roland Harrah III) is made to witness the horrors. Later, after Braddock escapes, he also takes with him a bunch of imprisoned children (sired by Americans, but abandoned and therefore punished by the Viet Cong), whom he leads through a perilous quest through the jungles to the border of Thailand.

Somehow, this final entry in Cannon’s Missing in Action trilogy has the smallest impact of the bunch despite being the most sentimental and overly endearing. It gives Braddock something to care about other than captured comrades, but simultaneously the film takes his wife away just when they’re reunited, which I feel is cheating. It almost felt like a Death Wish movie in that regard. It’s manipulative. Norris is okay in the role, but amazingly the picture is underwhelming as an action film and as a war movie. It’s too bad. It was written by Norris and James Bruner, who collaborated on a number of other projects including the original Missing in Action release. Directed by Aaron Norris. The actor who played Norris’s son – Harrah III – committed suicide in his early twenties.

Kino Lorber brings all three films in the Missing in Action franchise together for a handsome box set that fans will be happy to hear are back in print. All three films have been newly rescanned in 2K and / or 4K and the transfers are upgraded from the previous ones available from MGM and Shout Factory. Newly produced bonus features include brand new audio commentaries and interviews (Part III has the most bonus features). If the complete collection isn’t your thing, all three films are available individually. 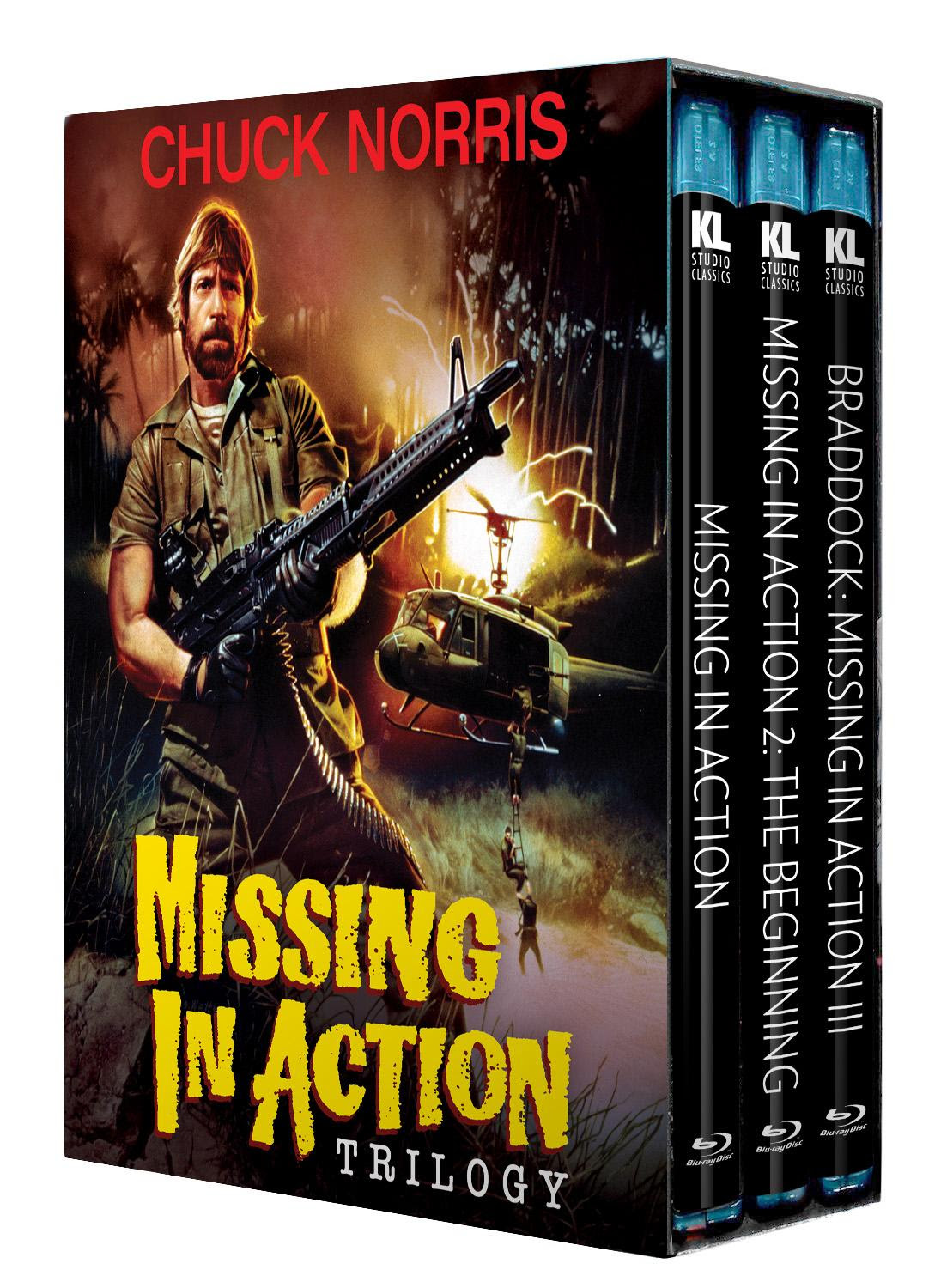