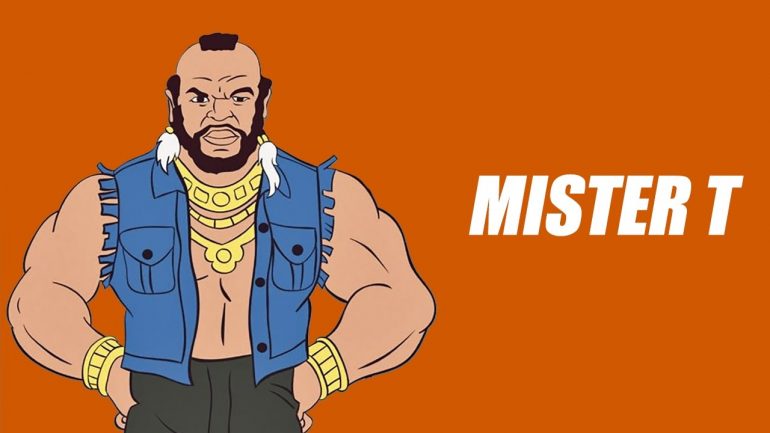 Mr. T has some inventive and imaginative storylines, colourful animation and of course Mr. T action! It also has hilariously bad dialog and too many gymnast kids hogging screen time which isn’t something I ever thought I’d write.

Plot: The cartoon stars Mr. T as a coach to a gymnastics team (with a specific emphasis on members Jeff, Woody, Robin, and Kim), travelling the world while becoming involved in and solving various mysteries.

Review: I’ve revisited a lot of cartoons from my childhood over the years, with mixed results. Some are so tuned to how a child thinks that I can’t make hide or hair out of them now. Then there are those that still entertain in some way. I thought the Mister T cartoon would be a complete mess upon a recent viewing, and it sort of is, but in a good way.

Mr. T inexplicably coaches a gymnastics team that tours around America, and sometimes other countries when the writers run out of ideas, competing in gymnastics meets while solving mysteries. Yes, this is basically Scooby Doo by way of Mr. T. The team members are a multicultural mix of characters, as well as a dog with a Mohawk and some skinny, white kid who dresses and talks like his hero Mr. T, which is as eye-rollingly annoying as it sounds.

Mister T has the potential to be a terrifying train wreck, but I was amazed at the amount of creativity that went into this show. Among the writers were Paul Dini and Sunbow writers Buzz Dixon and Flint Dille, and there seemed to be no end to the variety of villains, situations and colorful locales thrown at Mr. T. Each 22 minute adventure tosses everything the twisted minds behind this show could think of. One episode, “Mystery on the Rocky Mountain Express” featured crooks steeling an experimental virus from a government lab with the intent of ransoming it for millions, a kid getting infected by the virus and roaming the streets, a monkey who was exposed to the virus developing anti-bodies that could save the kid but the monkey is loose in the streets as well, and Mr. T’s mission to a) find and catch the monkey b) find and cure the kid, c) find and beat up the crooks, and d) win the gymnastic meet of the week. In 22 minutes! What the hell is going on in this show??

Other episodes have Mr. T fighting fake monks, mind readers, Manchurian candidates, street gangs, pirates, and ninjas (!) among other things, all while traipsing through jungles, deserts, American cities and exotic countries. Mr. T is depicted with his usual jean jacket, black pants, and gold chain ensemble and is actually voiced by the man himself. Indeed, he also appears in live-action segments before and after the show to set up the adventure and sum up the moral of the show respectively. And yes, there are lessons to be learned, like don’t lie, don’t boast, you don’t get anything for free, etc. Pretty much most, if not all, of Mr. T’s lessons begin with “don’t”.

Mr. T’s strength is portrayed as being almost superhuman as he bends bars, busts down doors and swings an alligator in the air. And the violence! For all his preaching before and after the show, Mr. T’s solution to everything seems to be to beat the crap out of the nearest warm body, or at least threatening physical violence. There seem to be no cops or anyone calling 911 on this guy as he breaks-and-enters buildings and smacks down 5 to 7 people per episode. All of the requisite Mr. T speak is in this too, including the classic “I pity the fool”. As with most Saturday morning Ruby-Spears cartoons of the period, the show began with previews of the episode with the main character telling you how awesome the upcoming episode was going to be. Mister T is no exception, with T telling you that he pity’s the fool that doesn’t watch his show. Just pity’s them. Pressure much?

Mister T is a pretty fun show (not sure what’s with the inexplicable spelling out of the word Mr. in the title). The show is wackadoo insane, but I got a kick out of watching Mr. T as the cartoon superhero he looked and acted like in real life, visiting hospitals at the time and preaching to kids about milk among other things on the A-Team. Although I grew used to the gymnasts in the show taking the lion’s share of some of the episodes’ screen time with T smashing bad guys in a couple scenes, I could have done with less kids and more T. The lessons are funny and seem shoehorned right into the crazy stories they came up with for Mr. T to navigate through. Kudos to those who were given a mandate to write a cartoon about what probably looked at the time to be a weird fly-by-night celebrity/fad act. They all did a stellar job under the circumstances.

Mister T lasted 3 seasons (two with new episodes, the third with all reruns) and 30 episodes at a time when most Saturday morning cartoons died after one season (Wolf Rock TV, I’m looking at you!). Mr. T himself was a phenomenon with toys, cereal, bed sheets, clothes, etc. with his likeness on them.  The cartoon is still a lot of fun to watch, if only for the ridiculous situations they put Mr. T into.