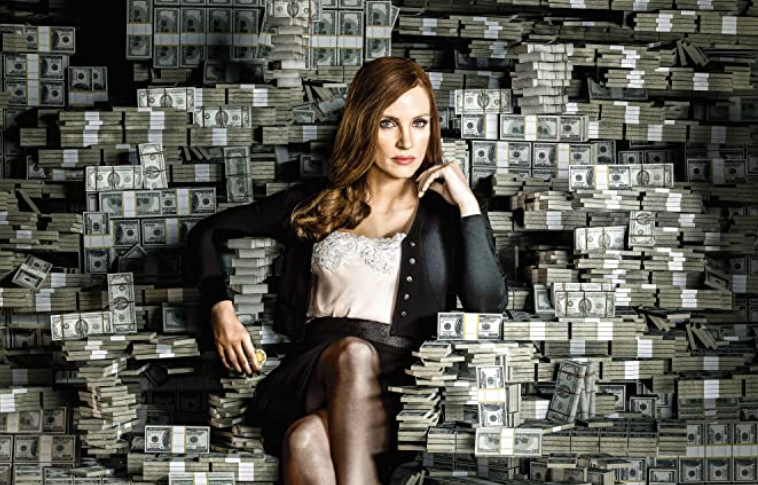 Molly’s Game has smart characters, an intriguing story and the fact that it’s inspired by (potentially) true events makes it even more watchable. Jessica Chastain is one of the best actresses working today and you can never go wrong with Idris Elba who once again proves he would have been a great 007.

Aaron Sorkin’s directorial debut “Molly’s Game” that he wrote based on the book with the same title written by Molly Bloom. Aaron Sorkin is the writer of “The Social Network”, and “The West Wing”. If you like listening to extremely smart characters like Aaron Sorkin, then this is the movie you will like. Jessica Chastain stars as Molly Bloom, Michael Cera as Player X, Idris Elba as Molly’s attorney Charlie Jaffey and Kevin Costner as Larry Bloom Molly’s father. Molly is a witty and incredibly articulate young woman who is usually in control of what is happening around her, but things still get out of control. Molly Bloom, aka “Poker Princess” organizes not quite legal gambling sessions with high-stakes for the wealthy and influential people. Jessica Chastain is a great choice for portraying characters like that. She has shown her powers in “Miss Sloane” and “Zero Dark Thirty”. She embodied the physicality and the voice of the character in a way that makes it interesting to listen to lengthy voiceovers. One of the monologues is placed at the beginning where Molly tells what were the events that changed everything and started the story. The images will suck you right in and you feel like you are in those settings too.

The main settings of the film are, of course, gambling spaces and hotel suits turned into small casinos. The main character Molly Bloom starts working as a personal assistant for a man who runs a high-stakes poker night once a week. Her casino is mostly focused on A-level casino players along with celebrities. Molly, who knows nothing about poker and casinos, learns everything that a poker night organizer needs to know. She watches the poker players play every night and listens to them attentively to understand what really is happening around the poker table. And what’s happening is that influential and rich people not just play games but also attract business clients and make very important decisions. The movie is perfect to see how someone can build the best high roller casino from scratch. There are of course people who just love poker, are very good at it, and just enjoy the game. When she and her boss have a disagreement she starts a business of her own. The film captures the atmosphere around the poker table and different types of gamblers very well. It shows how Molly Bloom attracted VIP clients and secured the seats around the table for them. The audience sees what kind of service the special guests of the poker nights enjoy, whether it is drinks and cigars or a bartender who has memorized what are the guests’ favorite drinks.

One of the main characters in Molly’s Game, Player X, played by Michael Cera, is based on a real person. There are speculations about who the real celebrity involved in this might be and the majority of fingers point at Tobey Maguire. Molly Bloom was the poker princess of an underground poker space in the late 2000s. Her secret casino was visited by some A-List actors such as Ben Affleck, who is a big poker fan and has even played with professional poker players, Leonardo DiCaprio, Nelly, and even a baseball legend Alex Rodriguez. Of course, any of them could be the inspiration for Player X. Which is true and it also is not true. Player X is a mix of different celebrities and bares the characteristics and does the deeds of many of them. However, if you read the book and watch the film, it will become clear that Player X is Tobey Maguire. Maguire was already known for his poker-related stories. The Maguire of this film is a villain, not a superhero. He likes ruining the lives of other players and eventually ruins the career if not the life of Bloom too. While in the book the hints identifying other celebrities are pretty rare Tobey Maguire hints are, kind of, all over.