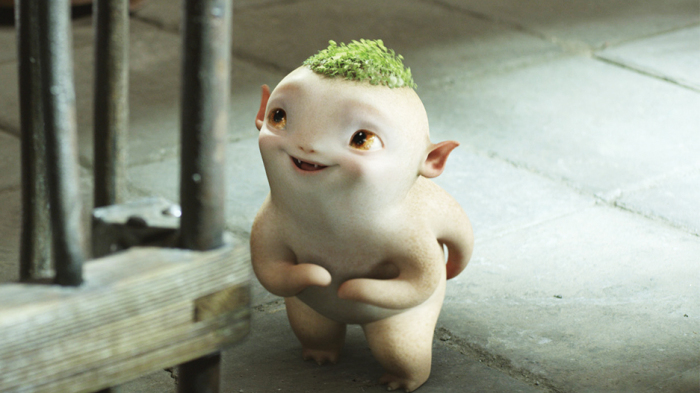 If you’re looking for something with lots of special effects, goofball comedy, and martial arts, look no further.

Plot: In an ancient world where monsters rule the land while humans keep to their own kingdom, a baby monster, Wuba, is born to a human father and monster queen. When mortals and creatures alike set out to capture the newborn, Wuba’s adventure begins.

Review: A monster hit in its native China, Monster Hunt was a flash in the pan here in the U.S. It’s set in a mythical era when gelatinous looking creatures are hunted by humans, but most of the monsters have figured out how to wear human skin to disguise their appearance. The queen of the monsters hatches an egg that will become the king of the monsters, but in order to protect it, she forces a human male named Song (Boran Jing) to ingest the egg to be protected while it gestates in his belly. Song is a bit of a dolt: He’s a castoff from his own village, and he’s an amateur monster hunter, and so this turn of events puts him in an unenviable position, to say the least. He teams up with another amateur monster hunter, a female named Huo (Baihe Bai), and together they roam the countryside, trying to avoid getting hunted themselves by an evil monster who wants to slay the unborn heir to the monster hierarchy.

Filled with special effects, martial arts battles, and slapstick humor, Monster Hunt is pretty much what passes for blockbuster entertainment in China. It’s well produced, silly, and garish, and it appeals to a low common denominator not looking for sophisticated entertainment. The English language version (which is what is being reviewed here) is a truncated version, minus 13 minutes of footage, and there are a few times during the movie where events are happening inexplicably, which is an obvious sign of post-production editing. This English dubbed version is suitable for kids (my 3-year old enjoyed it, so there you go), but adults will be scratching their heads. If you’re looking for something with lots of special effects, goofball comedy, and martial arts, look no further. Directed by Raman Hui.