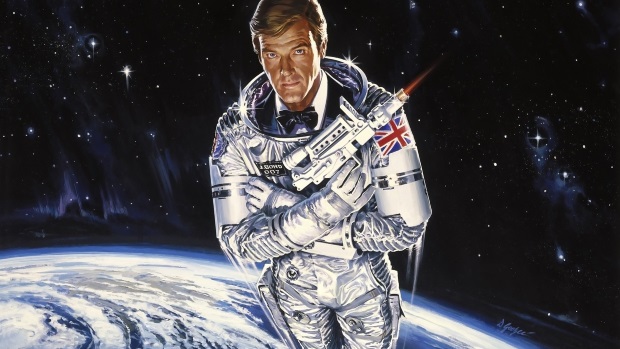 Moonraker has a steady pace (despite being a little slowburn at the start), builds tension, well-written characters, provides lots of battle damage for the heroes and gritty ending.

Plot: The plot is derived from a Fleming screenplay that was too short for a full novel so he added the passage of the bridge game between Bond and the industrialist Hugo Drax. In the latter half of the novel, Bond is seconded to Drax’s staff as the businessman builds the Moonraker, a prototype missile designed to defend England. Unknown to Bond, Drax is German, an ex-Nazi now working for the Soviets; his plan is to build the rocket, arm it with a nuclear warhead, and fire it at London.

Review: Sir Hugo Drax is a mysterious industrialist who found his fortune selling columbite, an ore with a high melting point used to make rockets and jets. He offers to the Queen that he would give to Britain his entire holding of columbite to build a super atomic rocket with a range that would cover nearly every capital in Europe and would give England a significant say in global affairs (this is the 1950’s). As England celebrates Drax and his government backed operation to build the super-rocket, called the Moonraker, M has his suspicions and enlists 007 James Bond to investigate Drax before the Moonraker’s first test firing.

Moonraker is the third book in Ian Fleming’s original James Bond book series, after Casino Royale (1953) and Live and Let Die (1954). As Fleming tried to find his footing with the Bond character, these first three books seem to have their own mood and tone each. Casino Royale is a gritty, realistic tale with villains that are more criminals than super villains and an ugly torture scene that would be shocking even today. Live and Let Die was a pulp, two-fisted action adventure with plenty of fight scenes, a larger than life, almost cartoony super villain, and a light touch of the paranormal with Solitaire. Moonraker is a mystery tale with James Bond acting as more of a spy and investigator than the first two books.

As a result, Moonraker is a slow burn, especially considering that the only logical conclusion (especially taking into account that there is a book at all telling the tale) that Drax is up to no good. The first eight or so chapters deals with Bond investigating whether Hugo Drax cheats at cards, as accused by M. The card-playing scenes are fun with Bond noticing that Drax uses his cigarette holder to reflect other players’ cards and dealing accordingly.

The next seven or so chapters after that deal with Bond investigating Drax and his Moonraker team as they scramble to get the rocket ready for its test flight. A lot of the suspicions about Drax simply arise from behavior: M doesn’t feel a man so rich and famous such as Drax should be cheating at cards, Bond observes that the Moonraker crew and Drax himself are all bald with moustaches, Bond doesn’t like Drax’s brash behavior which doesn’t seem refined enough for someone of Drax’s stature. The fact that it’s all superficial actually halts Bond from prying more when he should. Of course, all minor suspicions regarding Drax turn out to be true, and it would have been a powerful message in a time of cold war fears of a “threat from within” or fearing your neighbor, or a consideration that no suspicion is too small.

Fleming inserts tiny details here and there in the book that build out the world that Bond inhabits. There’s a great bit just before Bond and M engage Drax in a game of Bridge where Bond sprinkles black pepper into his champagne and explains to M that he learned that trick from the Russians. They would sprinkle pepper in their champagne when they had fusel oil on the surface from bad distilleries. The pepper brings the oil down to the bottom and Bond had grown used to the taste. There is another bit mentioned twice where Ms. Moneypenny tells Bond that a 008 agent that was thought dead had been discovered. Bond is relieved for an instant before he goes off and does other business. Later Moneypenny reports to Bond in some chitchat that 008 has been diagnosed with “shock” (likely post-traumatic stress disorder) and Bond briefly mulls the consequences of his job. It hammers home the idea that the super-spy game in these original Bond books is still a peril-filled government job and not as glamorous as it sounds.

After an attempt is made on Bond and Gala Brand (a Special Branch agent working undercover as Drax’s personal assistant) in the form of a cliff being detonated on top of them, and another attempt on Bond’s life through a high-speed car chase, Hugo Drax turns out to be a Nazi seeking revenge on England. Making a deal with the Russians, he intends to fire the Moonraker at London with a nuclear warhead, killing millions. While Bond and Brand try to escape Drax’s Moonraker launch site at one point, Drax unleashes scalding hot steam into the shaft the heroes try to escape through, burning and blistering their skin. The injuries sustained by Bond and Brand are anything but glamorous throughout the book. Having had his hand carved in Casino Royale (carried forward into the next book) and fingers broken in Live and Let Die, Bond has severely welted legs and back in this novel.

Drax’s speech to England before he launches the Moonraker is hilarious with him telling the country that he will carry out vengeance for his homeland, where the audience expected him to talk of the gift he’s given England. A bewildered yet polite English crowd lightly applauds with a BBC reporter covering the event remarking that Drax is very forthright and blunt but “there’s nothing wrong with that.”

While Bond and Brand manage to successfully set a new course for the Moonraker that would take it to the North Sea instead of London, there’s still a surprising amount of casualties from the resulting blast as opposed to Hollywood’s treatment of the character where Bond saves every innocent soul in the world with his exploits. Bond merely reduces the casualties in Moonraker, albeit significantly, with England covering up the incident as a mistake and hiding the nuclear blast as a common mushroom cloud formation for a bomb of that size and counting on wind patterns to blow the irradiated dust away.

Moonraker is a solid spy adventure with some well-written characters and a slower, yet steady and more confident pace than the first two books. Hugo Drax is a great villain with some truly vile henchmen, while Brand is a smart, confident female companion for Bond throughout the novel. The book cuts down significantly on the graphic descriptions of the food that Bond eats (as appeared in the first two books), though Bond’s meals crop up from time to time. I love one scene where Bond is listening to M complain about other departments while Bond starts drifting off into thoughts of whether he’ll have time enough for lunch. Fleming built in tiny details into his Bond stories that make the character and his world relatable, even among the super villainy, gunplay and femme fatales. Moonraker is no exception and is a great spy-thriller read.