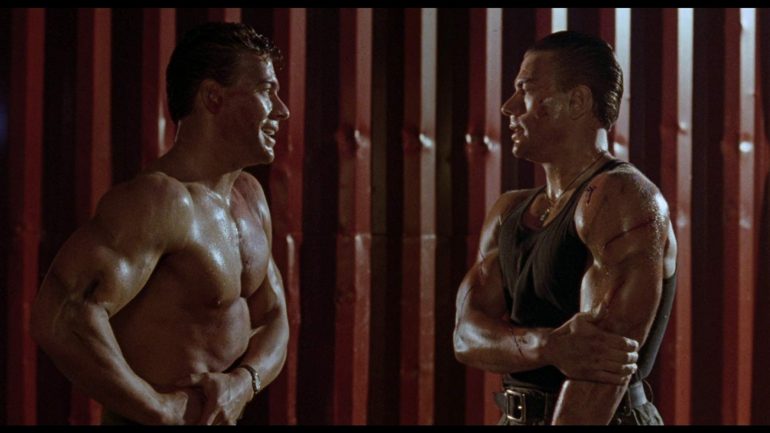 My Stupid Idea For A DOUBLE IMPACT Sequel

Ahhh, 1991. I was eight years old and well into my first crush on a girl named Dee Marie.

I was also heavily into action movies as exposed as I was to them by my dad. I saw as many as I could, too, and being the martial arts can I was, you better believe I was a Jean-Claude Van Damme fan.

That meant seeing Sheldon Lettich’s Double Impact, which was one of the biggest treats for me growing up. The posters fascinated me just as the film did watching as Van Damme took on a dual role for the first time, playing a pair of opposing twins reluctantly compelled to join forces and take down the evil gangsters and corporate villains who murdered their parents 26 years ago.

Their seperation ensued in the heat of gun fire, and years later as twins Chad and Alex are brought together for the first time, the friction is all too real.

The biggest factor, in my view, is Alex’s compunction for violence. Chad comes from a cozier milieu in Hollywood where the women get hot for his “big legs + karate = splits, no problem” schtick. And not for nothing either as at one point he’s forced to walk the walk with an unruly karate student when he oversteps. Clearly, Chad can handle himself.

With Alex, it’s all that, and a bag of chips that he takes from you before kicking you in the face and telling you to go fuck yourself. He’s a gangster with jagged edges and has been around the block more times than he cares to count. To that end, he’s also badass. And a survivor. One with certain…well, needs – such which can only be met by one Danielle (Alonna Shaw), his main squeeze.

That said, that Chad and Alex look alike is one thing, but it’s also a bit of an overstatement given some of the discernible characteristic between the two, and of course it leads to confusion, followed by Alex concussing Chad with a sick headbutt and cutting his lights out for a while.

Lo and behold, that darkly toxic air about Alex serves as an additionally piercing indictment on his character with respect to his state of mind. He’s terse, an alcoholic, and has no compunction with smacking women up and lashing out if he feels like it. No doubt that he’s evidently one of the good guys by the end, of course, but there’s no question that his penchant for knee-jerk reactions to tiny things over rational thinking are often what tend to stir the pot for their team as they fought to work together for the common good.

This is what led me to consider the prospects of what would entail a potential sequel. Indeed, it wouldn’t be called Triple Impact as the actor and most fans themselves might have touted.

For starters, with Van Damme being much older than he is, it would certainly serve him nicely in an era where franchises have carried over feasibly with their actors whilst age not being a factor. The Expendables, A Good Day To Die Hard and Logan are worthy mentions as the lead talents of those properties are presented as fairly seasoned geriatrics who can still hold their own bodyweight and kick tons of ass.

Van Damme, at the crisp age of 58, may not be able to do everything he used to on the big screen during his heyday of dancing to Beau Williams’ “Feelin So Good Today” for two Thai chicks before laying waste to a rural bar in 1990’s Kickboxer. That hasn’t stopped him from wowing audiences, however, and especially when it came to sharpening his craft and harnessing it more for a truly effective acting method as seen in films like JCVD, Enemies Closer, and even the two latest Universal Soldier movies and Welcome To The Jungle.

Van Damme, after all said and done, continues to bring a sense of versatility to his craft. Going forward, ideally, that could very well bode prosperous for tackling the roles of Chad and Alex while building its story, thus continuing the evolution of these two characters that made bank at the box office against all panning by certain critics.

I’d go into specific ideas, but I think I’ll end it here. It feels good to have finally gotten it out of the system too, even if it feels to some like I’m overthinking a simple action movie starring Van Damme and the beautiful Alonna Shaw.

Point in fact, I think I even had a crush on Ms. Shaw then as well. Good golly, what a beaut.