The Irish powerhouse actor may have become more of a common display in Action films since ‘08 but ever since ‘99, I’ve been used to seeing him in various war, crime and other thrill rides in dramatic tough guy roles. In the first of two lists, I rank his 10 most brutal outings. 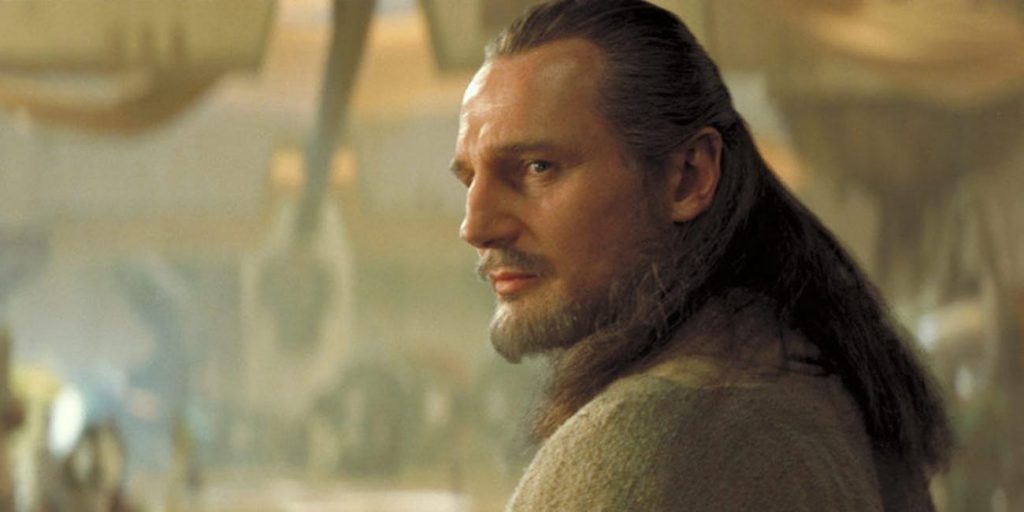 I was 9-years-old when I saw the original Star Wars trilogy and then this first prequel so sue me if nostalgia gets the best of me. This was the first role I saw the Schindler’s List star in and it’ll always be one of his best in my book. The film isn’t perfect but it still delivers on the epic side of things for those who aren’t too nitpicky. Neeson changed my world playing the wise yet still rather blind Jedi Master Qui-Gon and seeing him serve as Obi-Wan’s mentor as well as coordinating a planet battle against a crooked alien tradesmen’s robot army. When he’s not swinging that lightsaber weapon of his around and philosophizing about the powers of the Force, Neeson still looks the part of the space wizard while helping his co-stars through this visual effects driven vision.

One of many true life inspired films on this very list, this Scotland-set film despite sounding rather cliché and minuscule in plotting is far from that. It follows Thomas Tallen, who becomes a boxer for a gangster’s bare-knuckle boxing matches. Forced to accept this illegal lifestyle after his mining job unemploys him following a union strike, Tallen has to also survive with his life intact when not putting food and money on the table.

Neeson, prior to acting, had actually done amateur boxing so it absolutely makes sense why this could easily be called either perfect casting or borderline method acting. The whole film doesn’t outstay its welcome but is well-worth tracking down despite limited information on it and arguably not many used movie stores carrying it. It is well-crafted while also being dramatically rewarding and well-shot with the scenery and fighting highlights. It was good enough to be featured in many Best Movie Fight Scenes lists also so it can’t be bad to list here for Neeson’s best outings.

This is often a rival of the other Scottish warrior clan film from the same year, Braveheart, but, in all fairness, this film does raise the bar with its adventure, quasi-western, historical drama and war themes. Following a cattle farmer and trader who had to allow his community to fight back against the upper-class state oppressors. The whole film is fueled by a sense of feeling authentic regardless of the historical fiction and dramatic license that it adds. The sword fights, scenery and music all are riveting while enhancing this epic to the point of where one truly does feel like they’ve just traveled back in time.

This isn’t one I’ll constantly revisit but it’s still a very well-made film with themes worth discussing long after it’s ended. Much like some of the films listed on here later, it deals with survival, tragedy and the wilderness. Unlike those films though, it makes gripping use of multiple backstory reveals and icy weather chills to get the mood and the uncompromising premise down. It follows oil drillers coming to terms with their past and their faith inbetween trying to survive the cold and the wolve’s attacks. Neeson should’ve won an award for this portrayal of this man but alas life just isn’t fair these days now, is it?

I’m not one who can usually stand animals attacking and being killed in return as it’s a morbid subject at times but here, in this rare instance, this is a film that treats its subject matter rather maturely while also giving a voice to workers. And not just any workers but ones of the most dangerous yet infamous profession that is drilling for oil under terrible conditions.

6. A Walk Among the Tombstones

Playing an NYPD detective on the trail of two serial killer constituents, this film by genre writer Scott Frank manages to make for a neat character study and wasn’t at all a Taken rehash like many misconceived it to be prior to release. This film manages to sneak in some light commentary and satire on the end of the ’90s, the start of a new century and even some classic detective literary-film character references. It’s never cute for its own good and despite partially showing some bloody moments, it never feels like an unpleasant rollercoaster, only an intense yet moody escapade. By having some of these historical fictional elements and not reliant on typical tropes, this film offers up one of Neeson’s most atypical heroes in quite some time as well as some gripping twists that actually pay off.

Occasionally way too ridiculous near the end, this film still remains gripping thanks to the creative mystery and it’s def a mystery that Alfred Hitchcock would tip his hat to. As a former policeman-turned-insurance salesman, Neeson lets the film do the rest of the talking as it’s got a dense enough backstory while selling all the punches and intense phone conversations. This film is comfortable being its own Cellular/Die Hard-on-a-train type outing but never to the point of where it feels like it’s reliant on other films to be its own thriller. The whole thing doesn’t bore or get tedious, it’s one uphill fight with enough material to make this one of Liam’s instant classics.

As former CIA operative Bryan Mills, Neeson not only adds credibility to a fascinating yet formulaic at times badass role but also launches the second action-packed stage of his career. While this hit film inspired sequels and imitations, it still never hurts to revisit this gem as it’s got wonderful set pieces and does a good job at letting the France settings help flesh out the story much like any James Bond film. For a film quoted in pop culture and still mocked by its haters, one can’t deny its unusual level of maturity and gritty human trafficking material inbetween all the chaotic fights and car chases. Neeson was unsure about the film’s success potential prior to accepting the role but one thing was for certain: he was too good for the role, let alone the film. Regardless though, it should be embraced by fans of his for decades more.

As disillusioned and not-easy-to-get-along-with U.S. Marshal Bill Marks, Neeson gets to play with different problem solving aspects and a new stage of evolution. The character has nothing to live for except doing his job and by saving these people on a plane with suspect psycho on-board are the ultimate steps to his redemption- all while trying to be one step ahead of this madman and his endless text-sent threats. Much like any awesome action-mystery mash-up, this film works well by not overdoing the airplane disaster tropes and having enough suspects on-board to make Agatha Christie struggle to figure it out. In the end, it’s not a waste of time and it’s definitely a game changer for those who like their disaster movies to be above-average while having enough stakes raise to make it to the finish line without feeling insulted.

Forget all the other action-thrillers he did before and after this! This role still measures up quite well for both action-crime fanatics and lovers of Neo-Noir. A neat saga of struggling redemption and anti-hero vs. the crime underworld material, it manages to not feel derivative and more like a complimentary thrillride. It may not be better than 16 Blocks or John Wick but it easily outdoes Road to Perdition and State of Grace! As former hitman Jimmy Conlon, Neeson is able to play well off of main villain-former employer-former pal Shawn Maguire (brought to life by the always game Ed Harris). The two are able to form a cool Training Day/Heat type bond each time they’re on-screen together or in separate rooms but it’s all well-done at the end of the day.

Having endless chases with assassins, crooked cops and other Irish mobsters, this out-of-control film still manages to have a soul (unlike some of its characters) and still be organized in what mayhem it unleashes on-screen. It never grows old on each viewing and while this could’ve easily been a ’90 film that had starred Mel Gibson, Harrison Ford or Bruce Willis, Neeson makes an argument for why he was able to delve into such a complicated yet efficient badass. 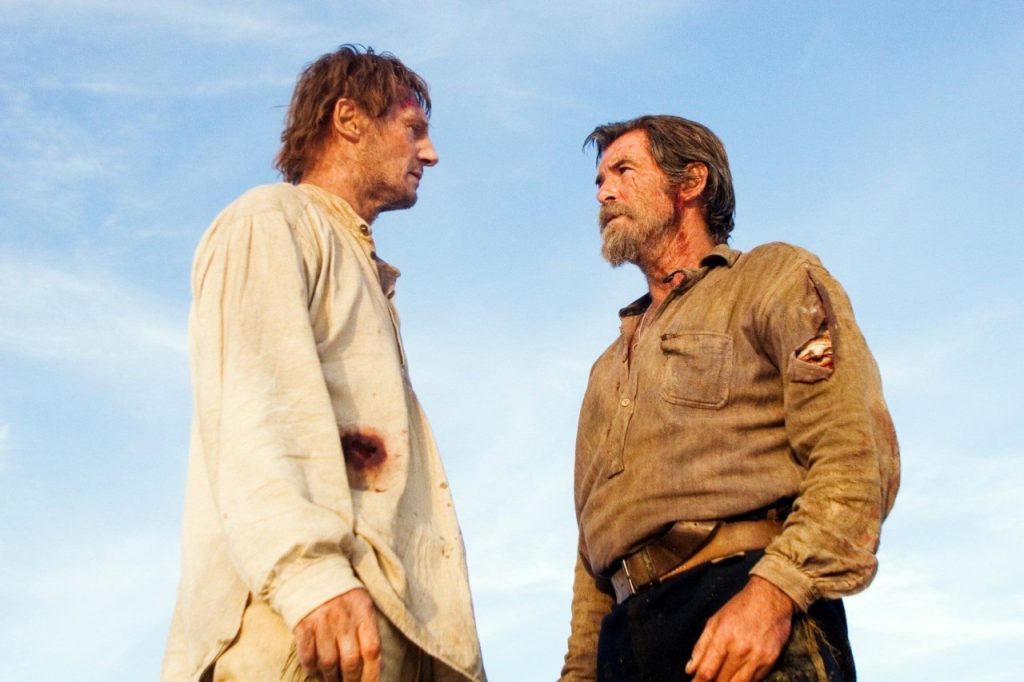 This revenge neo-western follows Neeson as a Confederate colonel leading some bounty hunters after the Union soldier (Pierce Brosnan) who killed his family while obeying army orders. The whole film is often needlessly criticized and it seems like far too many people who tackle westerns don’t seem familiar with how the tropes are what make these films appeal so very much. This film might not rank up there with High Noon, the original 3:10 to Yuma or even Unforgiven but it’s not like it was acting like such. If Spaghetti Westerns and other revisionist works, then so can this well-crafted revenge tale.

The scripting keeps its basic yet still surprising while the direction allows for many striking visuals to add to the mix. Both lead stars play well off each other while also allowing to tap into what makes the story work for both the film and the audience: it’s up in the air as to who to root for as both men have their reasons for doing what violent actions that they did. By keeping its narrative open-minded and how it’s irrelevant what side of the Civil War either person was on, both are driven by their survival and can’t escape the gruesome past.