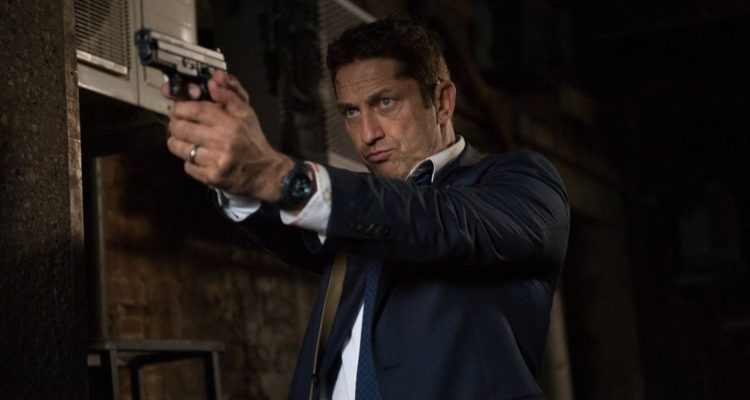 Time to rank another ‘00s era Action favorite and his arguably ten best Action genre entries where he delivers the goods. Often given material that could have easily gone to either Jason Statham, Liam Neeson or even Scott Adkins, he nonetheless tends to own every role that he’s given.

I’ll unleash another Butler Top 10 list soon but I got to start the show rather brutally this way first. As sub Capt. Joe Glass, Gerard adds another stellar role to his list of ever-quirky Action hero roles. He gets to be laid-back and deliver straightforward inspiring speeches before ordering his shipmates to their battle stations without being low-brow or hammy. The whole experience does plenty of what any kickass submarine flick should do well. Yet another psychological kidnapping thriller, Gerard brings a sense of reality to this unusual yet sometimes emotional flick while playing off nicely against antagonist Pierce Brosnan. By going for the everyday married man having to play chicken with a mysterious hostage taker, Gerard never intends to steal the film or outact his competition, only bring some sense of reality while asking the same questions the viewer is – albeit never in a wimpy way, just a brave fashion. A fun mash-up of Armageddon and the show 24, this disaster film is surprisingly intriguing unlike some of Dean Devlin’s earlier material (probably because he had uncredited Jerry Bruckheimer to lean on as producer instead of the schlocky Roland Emmerich). By cutting away from heavy focus on the casualties and instead cutting straight into the White House cover-up without getting bluntly political, this film ends up being rather energetic fun. The whole thing is bonkers if you want to dissect it but the film benefits from moving at the speed of light instead of feeling like it’s all needlessly drawn out. The super satellite is rather well displayed and used in the main plot arc while also giving Butler plenty of places on-board to fight a few culprits in the second act.

Butler, (bald) Matthew McConaughey and Christian Bale fighting dragons during the post-apocalypse is all you need to know about this plot. Despite being produced by the Weinstein Co. and sounding like a outrageous so-bad-it’s-good ’80s fantasy, it still earns its B grade (or shall we say “wings”?) with flying colors (okay, now there’s the pun!). Every time someone is on-screen, they’re either arguing, planning the attack or attacking dragons. By remaining this simple, all three lead stars get to play countering voices who all are loyal to the same cause while struggling to keep the survivors they’re guarding alive and well.

Some movies are more fun because of their ideas as opposed to how said ideas are utilized and this film is no exception. That being said, Gerard was perfectly cast as this vigilante madman and there’s no denying that he’s one of the main reasons people keep coming back and referencing this flick. While this film is often compared to Falling Down, Ricochet and Die Hard 3, I’d go even further to say that this gives The Dark Knight’s Joker a run for his money! Jamie Foxx had no chance of keeping up with the pro that was Butler here after all.

He has his moments in Atilla, Gamer, Beowulf and Grendel and Coriolanus but nothing close to this awesome real-life war biopic. A true life Samaritan and war fighter rebel, this film after overlong yet needed build-up gives us a role that only Butler could’ve pulled off. Utilizing different weaponry and living rather messily, the viewer gets plenty of time to root for this troubled yet later redemption-filled anti-hero. The drama sets off the ticking clock which sets off the awesome tactical nature of this whole premise and it’s a worthwhile pay-off.

A well-deserved sequel is on the way soon and who can blame them? This has been compared to every other crime caper film from Training Day to Heat but what sets this mostly apart from those (if not a typical Criminal Minds episode) is the visual details of the treasury funds about to be stolen and the uncanny cat-and-mouse games that are on display. Butler plays the vice squad leader of the LAPD Sheriff’s department as both a personal life wreck and as a well-meaning douchebag while perfectly combining that persona into a rather twisted anti-hero to follow around for the duration.

It’s hard to see this role would’ve originally gone to when it was in development hell back in the day but it’s great to know that this story shall be expanded upon in the future, let alone how it waited at just the right time to be crafted this way. Butler owned it: end of story! Plus, he got to lead a team of other neat character actors and play off a bunch of other cool actors playing former marine-turned-robbers. Now, Hollywood, make that sequel for us on the double!

Zack Snyder’s earlier epic might not appeal to all but no one can deny the outrageous impalements and other falling fatalities that made Gerard a theatrical name worldwide! This isn’t just Sparta- this is Gerard the badass Spartan! As King Leonidus, you had no doubt in your mind that he was commanding the armies. You also can buy that he could be a one-man army if forced to fend for his own self. As a bonus, he also has a cute queen in Lena Headey to play off of and one cool army to inspire with warrior worthy speeches!

I must praise the badass role that is Secret Service Agent Mike Banning! Holy crap, is he the man with all the plans!! This film trilogy brings more life to the endless Die Hard/24 type plots we’ve all seen while being creative with the mayhem and villains, if not numerous traps to save the President from. Butler is not only game in this role but owns it whether it’s in the various foul-mouthed one-liners he unleashes or coming up with endless ways to dispatch legions of terrorists each outing. Angel has its moments too but the first two are the most brutal action films in quite some time.