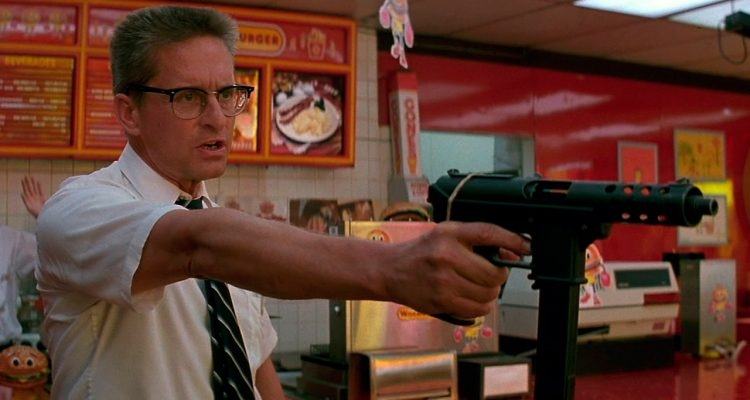 Joel has been hit-and-miss for some crowds but while he might not always understand campy films or Batman for that matter, he does however, know how to make disturbing portraits, utilize clever art direction and incorporate colorful characters portrayed by unrecognizable yet talented actors.

I meant to get this list finalized earlier but alas now it’s long overdue following the talent’s unexpected death during the middle of this year so here it goes!

The first of Joel’s collaborations with rising star Colin Farrell, this Vietnam War picture covers many of the same tropes as The Boys in Company C and Platoon and for once just shows the vigorous training exercises some of these soldiers had to endure before actually getting to the battlefield. Joel’s film is appropriately hellish and the dream-like twist ending is very in-sync with how the distortion between reality and fiction was definitely a factor when it came to training for missions. It also makes for a fun time when you’ve got two protagonists who are some what rebellious making it rather suspenseful as to who’s going to graduate and who might get court-martialed.

This film also contains various earlier appearances for many future badasses including: Nick Searcy (Justified), Tory Kittles (Olympus Has Fallen), Clifton Collins Jr. (Westworld), Neil Brown Jr. (SEAL Team) and, most notably, Cole Hauser (Yellowstone)! Many of these were early or first-time appearances for the cast and they all hold their own rather well each time their on-screen and this film honestly deserves more attention these days due to capturing sheer restlessness and adrenaline rather well on-screen.

Shot and lit much like earlier Jerry Bruckheimer productions such as Crimson Tide and The Rock, this spy buddy action-comedy is never perfect but never dull, lousy or overlong either. It certainly gives the Rush Hour films a run for their money (not that that’s hard to do) and is an endlessly exciting time. The story isn’t new but it’s well-told. It’s a far better film for Chris Rock especially when considering how he was wasted in so many unfunny films outside of his successful shows and stand-up acts. This also is a far better outing for Anthony Hopkins for the ’00s especially for when this was the time when he was often poorly used in dull novel adaptations, Hannibal knock-off roles and far worse spy films. It’s also just plain cool seeing the two of them play off each other, let alone be in action. And this film actually shows some considerable restraint for a film made in an era where everything had to be overedited, scored with the newest irritating pop music sample and be a rip-off of whatever got released a year prior. This film just aims to please undemanding buddy movie genre fans while not being asked to exit stage right early and I’d say it holds up rather well overall.

This multi-character crime drama has some unusual plot twists and plenty of solid acting but doesn’t deserve the backlash it got on various critical circles. It’s not perfect, let alone even Joel’s best hour but hardly a redundant movie, just an unusual one to digest for mainstream audiences apparently. It’s not groundbreaking but does have some straightforward genre expectations and quirky characterization for all involved. Give it a view if you need something else and it’s on your favorite streaming devices.

Wikipedia mistakenly claimed he was a producer on Cleopatra Jones when that’s not even what the sourced newspaper report claimed. That would’ve been amazing but alas after careful examination, I have to pick something else. There’s Flawless but despite it being a Crime Comedy version of De Niro’s Taxi Driver, it’s a tad bit of a stretch. I can’t complain about how the action was shot in those Batman films he did but alas they’re just too damn silly for their own good and I want something on here that most can agree with.

So, screw it, I’m going with A Time to Kill. I’ve seen some critics note that it looked on the surface like an Action blockbuster film while truly revealing to be a thoughtful courtroom Drama and Crime Thriller but underneath all the suspense and lawyer arguments, I’d say that the opening revenge bloodshed, street riots and sniping segment were pretty-actiony. Fuck it, this movie is all about the testosterone when it’s not about the politics and avengement so it’s going on here.

Why is it a great film you ask? Well, acting, cinematography, writing and adapting aside, it truly does do what every good Grisham novel (let alone movie version) does well: philosophize without demanding you agree, be intense without being pretentious and stupid, and hit home on some of the same endless discussions that make similar courtroom thrillers like 12 Angry Men, Anatomy of a Murder and To Kill a Mockingbird such splendid films. As for the haters of this film, yes they deserve to die and we hope they burn in Hell. That’s too damn harsh but I’m sorry I just had to quote Sam Jackson’s famous line here!

The Virginia Hill Story was an interesting early telefilm but hardly action-packed. I had to go with a different biographical titled character so I went with the rather-talked about journalist who tried to lead a personal crusade against various dangerous criminals with drug smuggling and I.R.A. ties. This film isn’t hard to predict but does a good job of showing the uncertainty and distrust with both the news media printing a dangerous story and the criminal informants having their own double agendas. It flows quite nicely, looks stunning and has an appropriate soundtrack.

I’ve seen some sites list this as Action, Fantasy and Horror but it’s honestly got elements of all three. It focuses on a mysterious ranch haunted by farmer Nazis and then more mysterious terror begins to erode. Featuring some of the stars of Prison Break, it’s easily some of their best roles as well as a better role for always-struggling-outside-of-Superman Henry Cavill. Endlessly grim and exciting from start to finish, saddle up for the gruesome thrills and chills!

Plenty of car racing and outrageous comedy make this a definite winner for Joel and it gets showcase plenty of early comedians while also find a fun duo with The A-Team’s Mr. T and pre-Full Metal Jacket Adam Baldwin. The film isn’t perfect but it’s not a car wreck (yes, a pun, got ahead and boo me!). It helps that it carefully times all of its gags while never forcing it upon the audience. Worse comes to worse, if you don’t find the first dozen attempts at amusement to be a riot, you’ll still find plenty of other material to laugh at, let alone go home with a shiteating grin on your face. Pump up the volume and brace for impactful laughs!

This cult film has since been regarded as one of The Godfather of vampire subgenre films and this one took the whole Peter Pan mythos and inserts various Action, Adventure, Comedy, Drama, Fantasy, Horror, Music and even Western elements into its whole package. Much like Near Dark from that same year, its soundtrack and the improvised comedic bits make for some intriguing characters and that’s all before you get to all of the insane fighting, vamp transformations and other shocking moments!

A freaky, quotable and very well-rounded thrillride that rivaled Panic Room that same year as most claustrophobic film of 2002. Easily one of Colin Farrell’s most moody yet very grounded roles to date, it also has another neat Kiefer role that Joel gets to show off in the form of the Hannibal Lector type serial sniper simply named “The Caller.” Joel makes use of the same earlier thrills and chills he showcased in earlier ’90s and ’00s films while also having his style now look way grittier much like his best friend David Fincher’s work ended up being as well. The rest of the roles are well-characterized and it’s also easily one of Larry Cohen’s best screenplays adapted by far.

An endlessly mentioned cult film that spawned many intense discussions, film debates and even endless internet memes, this film definitely is more relevant than it was when it first came out thanks to endless cable TV airings and it being rediscovered by fans of the cast. Hardly as nihilistic as a Death Wish film, very well-rounded in its overview of how a madman can suddenly go berserk and one of many films to successfully use L.A. as a backdrop for its various crime escapades. This film inspired various films and TV shows such as Breaking Bad but it demands to be seen primarily for what it does well: showcase a seemingly normal individual mentally lose it and go about causing chaos in a huge city while thinking that he’s untouchable and making a difference.

The other roster of characters also end up being very intriguing on repeat viewings and the score and establishing shots help build up the much-needed momentum for this intense tale of a man in so many wrong places at the wrong time while doing every wrong thing imaginable. Stupidly misinterpreted by various hate groups and political discussions as being a huge message film, this film never promotes vigilante violence nor brings up any material that it’s not ready to even half-ass talk about, simple show chaotic people going into very bad scenarios that inevitably bring down various other downfalls for all involved.

Want more lists? Email us, bros, we got you covered!