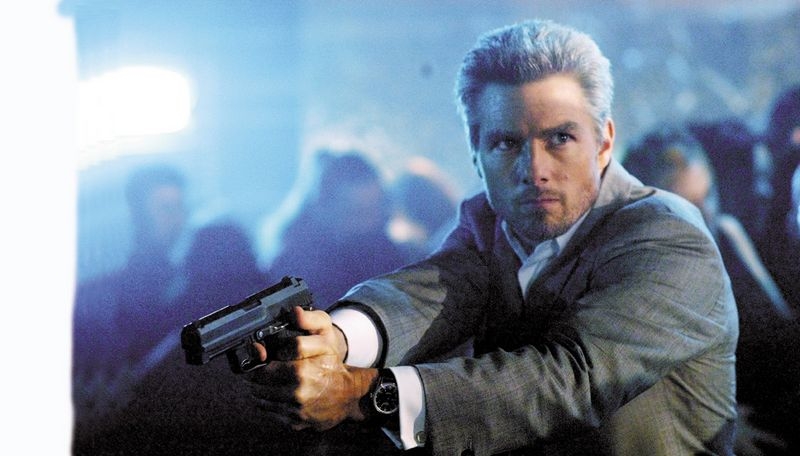 Time to list another has-been and his best ventures into cinematic action epics. Always stylish and overlong, he has enough to review and cite as the ten best Action entries as part of his filmmaking craft. I didn’t include his awesome shows Miami Vice and Robbery Homicide Division due to wanting to focus solely on his film work and some elements of either show being a tad too outdated but that might be a list for another time! Let’s begin listing away:

Despite being rather melodramatic, this film has many stars in their early careers giving rather dedicated performances and some of them went on to be in later Mann productions. Some cool thrills unfold after much of a slow burn but the scenery and music really help this Mann-produced thrill ride unfold despite not always being successful in every area.

This highly-acclaimed and well-rated ABC telefilm follows an Eddie Bunker-based convict surviving during a prison track race and has much of the reasonable survival instincts, sports training and other inspiring movie tropes we all know and like told mostly well. Other character actors appear in this film and the soundtrack is beyond catchy as hell! You can find it on YouTube and you’ll be easily entertained if you’ve got 90s minutes to kill!

Mann’s brief involvement of this as one of the listed producers is primarily extended to helping his Collateral actor Peter Berg make the film with some advising from some FBI colleagues that Mann knew. However, Mann’s style is extremely apparent throughout the various gunfights that occur during this film. Overall, it would’ve definitely had been a film that he could’ve taken on but are we sure that if it would’ve been as epic with him in complete control? Probably a tad more cliche but there’s no telling (especially when we were still recovering from the stinkburger that was that 2006 Miami Vice movie).

You can find this on the internet as well in what I believe is the uncut network TV edit for this two-part movie night event if not the edited down DVD release. Nonetheless, this film (which is often listed as propaganda due to its anti-drug perspective and coming out rather soon during the period it was covering of the late ’80s/early ’90s drug trade in South America to the States) is very well-casted, reasonably intense and consistently moody with not a single bit of slow or wasted time taking place. It’s non-stop cat and mouse and gets Mann’s themes better across than he arguably ever did in some of his other latter work, let alone later seasons of Miami Vice.

Another action-packed sports film and hardly as groundbreaking as it wants to be, it’s still a very neat drama covering one of Muhammed Ali’s biggest sports fight in history. Will Smith commands in the role he’s given and while the film’s cliches are sometimes annoying obvious and side-track from the plot’s main training scenes, they never distract or feel as cliche as most Hollywood boxing dramas do. The actual boxing looks well-staged and you sometimes feel the actual sweat and heart-pumping in the various sequences.

Unfairly bashed and while obviously not for all audiences, this neat mix of adventure, fantasy, horror and war movie genres are well mashed together to make for a neat gritty atmosphere. Rather mysterious and gory at times, it has a good cast of various early-career and latter-day veteran actors and has various fun betrayals and plot twists worth witnessing. Despite continual requests to update the film from older VHS sources and long-gone from Netflix streaming since the latter ’10s, you can still find reasonable bootleg copies updated from Laserdisc transfers or rare HD channels telecasts. And you honestly won’t regret it as the film has taken on a whole new life since then and allows one to see how creative Mann can be when taking on various elements and having a a supernatural premise as the backdrop for a various chain of events.

Another heist film inspired by Mann’s interviews with ex-con turned author Eddie Bunker, this also features some of the better music by Tangerine Dream, acting by the likes of James Caan and Tuesday Weld. If you ever have time and want more from this atmospheric thrill ride, check out Mann’s episode of the film documentaries series The Directors and you’ll see how they got the mood, realism and themes down for this lesser-seen cult film, you won’t regret it!

3. The Last of the Mohicans

Mann, unlike most Hollywood filmmakers, manages to perfectly balance out themes of romance, war and adventure all at once in this adaptation of the outdated French and Indian War-set novel. Utilizing a method acting cast, career-best performances and rather plausible war scenarios, it’s a big-screen epic worth seeing on said big screen if there ever is an anniversary screening in your hometown! Unlike most of Mann’s other director’s cuts, this extended version is definitely worth seeing as some of the smaller moments do complement the overall dramatic rewards in the second portion of the film and it is a film impossible to look away from at all times due to the sheer spectacle that it is.

Dispute which one is better all day but most audiences won’t regret seeing either one. Heat is one of the better talked about cops and robbers films that’s very grim, built up on appropriate mystery and sometimes even darkly humorous due to the quotes from the various characters. Collateral is also another neat cat-and-mouse film that I find myself watching each time it’s on TV and even when one knows the ending, much like The Hitcher and Training Day, you just can’t look away from the chaos that unleashes. Mann has always used the night time scenes, various soundtracks and overall environment to demonstrate what kind of a dark part of crime ridden Los Angeles the characters live in (for all we know it’s probably the same shared universe!) and it’s easily the best used here.

As a whole, if you have to see any of Mann’s films, at least see these first two selections right here and then the rest is up to you to choose from then on. They definitely offer career-best roles and are rewatchable for their discussion worthy crime trope topics, especially with how the protagonists in Heat are virtually the same person on different sides of the law and the thriller elements of Collateral being a fun “shit hitting the fan” spectacle.