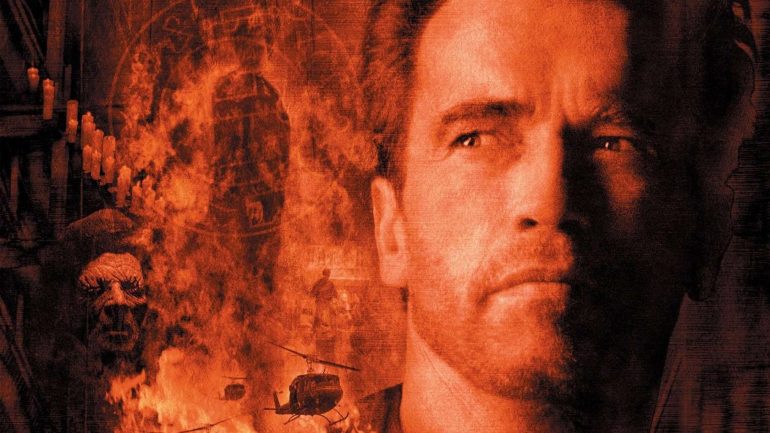 Responsible for everything from every other demon and alien creature films to superhero blockbusters and low-budget horror to various other bats, gargoyles and reptile creatures in telefilms of the week, Winston understood storytelling as much as how to make the creatures look alive and a character in their own rights. Along with Rick Baker, Gary J. Tunicliffe, Robert Kurtzman, Tom Savini and Rick Bottin, he’s always been one of my absolute favorites to follow growing up as a moviebuff so I figured it was time I’d ranked his 10 best cinematic entries.

Overseeing the creature designs was a nice touch for this film which many seem to rarely mention Winston’s involvement on for whatever reason. It’s a solid Star Trek tribute and homage all the same but the reptile antagonists look great and evoke appropriate menace without becoming forgettable faceless (no pun!) villains. Next time you choose to rewatch it, be sure to marvel at these alien designs!

Winston had plenty of other remarkable work including Batman Returns, The Relic and Gargoyles (1972) but I really dig the cyberpunk designs in this fun disaster film adapted by former Marine Chuck Pharrer (from his own comic book of the same name). The movie isn’t always as terrifying as it could be but there’s still plenty of effects to marvel at from the various human-to-robot transformations (which are so not CGI) to the other bots which come in numerous sizes to avoid all looking the exact same.

One of Arnie’s most infamous or underrated films depending on who you ask but the demon designs seen under Winston’s wing are definitely intriguing and are even better served by the various gaffing, camera angle, shock scares and intense music. The plot might not be for all but as a demon movie completist, it’s a fun movie to see overall. It’s also nice to see yet another Schwarzenegger film served by Winston’s effects wizards too!

Every effects wizard has some cool creatures under their belt and Winston had already brought to life almost any kind of supernatural entity, gothic creation and extraterrestrial you could shake a stick at. This is not only a fun action-packed, horror comedy but one of my favorite gator films to date and much like with his dinosaurs and Pumpkinheads, he made the creature be the main star while also looking great without looking like an obvious puppet!

Winston was never first in line to be part of the ever-changing Star Trek universe but for a franchise that was always changing and working with numerous talent, it was great to see them taking a chance and hiring plenty of other brilliant minds who’d been in the moviemaking industry for years. The Borg were always one of the best villains for the entire latter part of the franchise but to see their costumes and overall design look far more appropriately cinematic while still maintaining the feel of the initial show’s intro was great.

They’re incredible freaky villains in the dark (some of which have been compared to the cenobites from the Hellraiser franchise), mirror much of Winston’s earlier Terminator creations and are easily the best look of the cyborg alien race to date. Terrifying just to think of and worn by various actors and stuntmen throughout, they bring the chaotic race to the next spooky level.

If there’s anyone who can say they totally took the shape of the prehistoric dinos to the next level, Winston was the man for the job. While the creatures are CGI for the full-body shots, their medium level/cut-off appearance is animatronic but this is still the rare use of where both the computer animation and practical effects departments were communicating with each other and on the same level instead of like today’s world where everyone works alone against the production clock in their own departments.

Wisely choosing to not go with the outdated claymation or stop-motion route and stick to using puppetry and other remote-controlled, dressed up rubber bots, these dinos strike the appropriate chills and thrills still to this day. The rare use of where the effects were central to the vision and would’ve easily killed the film’s overall momentum (or shall we say, “effect”?) had they not been 100%. Fortunately, that vision was well realized and still looks lovely on-screen (something that can’t be said about the numerous sequels!).

Winston was in charge of building upon his previous Spielberg collab project Jurassic Park by having radio-controlled facial movement and puppets for his guerilla creations. He even had the various actors and stuntmen in the suits and having to make similar designs in that category. ’70s style Planet of the Apes this wasn’t! Winston took this as a personal challenge to show more of his diverse talent his production company could offer and once again worked alongside Industrial Light and Magic’s visual department. The effects are criticized in half the negative reviews for this film but I’ll gladly take them over some of today’s crappy effects as you feel the heart and energy that went into this film and you’re able to suspend belief with the concept. Some of the close-ups of the costumed apes might be a tad too dated but at least the intent and overall effort is admirable and worth seeing for effects wizard fanboys.

Much like with Congo, Winston was given the change to not only bring the creatures to life but also be a 2nd unit director for the various pick-up shots needed. Winston provides some of the most memorable efforts for James Cameron to date by helping him realize everything from making the previous designs for the simple xenomorphs from Ridley Scott’s original film still be maintained and enhanced a tad (they move around far more frequently instead of looking like just an athlete in a H.P. Lovecraft type created rubber suit). The tails are more vicious, the mouth emit plenty of slime effects and the overall costumes look very human-like while still freaky just to witness.

And of course, it would be criminal to omit mentioning this: the Alien Queen is very freaky. It utilized two stuntmen just to operate the giant arms and successfully brings James’ personally designed sketches to life while being kept in the darkness until the very end to be unveiled for the final fight. By having the various creatures come in different sizes and well-worn by the stunt crew, they convey the much-needed dread without ever looking heavy-handed or like last-minute efforts.

A year after taking over the Aliens installments, Winston stepped up to oversee the other Fox franchise and this first entry, you still have practical lasers being used along with animated versions of the same effects and you never are looking to see what’s not legit and what is as it all flows together rather well. Due to everyone making sure it was all working from the get-go instead of waiting for things to get worser while filming overseas in South America, one wishes more Hollywood productions took material like this far more seriously.

The title creature still looks great and having its memorable stretched-out mouth line up with the voice effects and other scales on its body make for a great unmasked villain. It still annoys me when I see creatures with similar designs (I”m looking at you Guillermo del Toro!) as they are so obviously ripped off from this mold but alas what can you do besides go back and appreciate this awesome creature?

Winston and his studio did plenty of great mixtures of both make-up and animatronic effects but while he oversaw the title villain’s effects for the first film and did just as solid a job arguably on the third chapter, he definitely is at this finest hour in this blockbuster sequel due to the skin wounds, arm moving and other damaged cyborg segments looking the most convincing throughout here. Just the scraping open the skin and separating it from the metal endoskeleton is enough to make this argument complete. And once again, it’s a crucial moment in the film’s narrative and to not have that in the scene would severely damage the film (I got to stop inserting unintentional puns here).

Want more lists? Ask away to us via email!