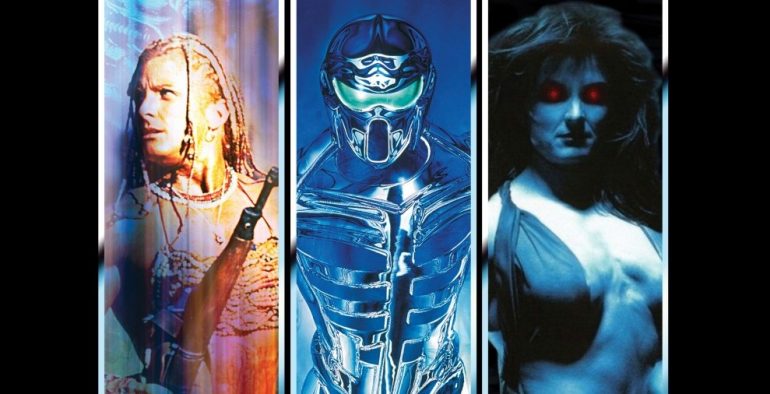 The Nemesis sequels are a mixed bag but for fans of Albert Pyun or collectors this is a must have as it’s great to finally have these movies remastered.

Plot: It has been 73 years since Alex failed and the Humans lost the Cyborg Wars. Since then, the Humans have been enslaved. Scientists have developed a new DNA strain, which could signal the end of the Cyborgs, and they inject it into a volunteer. When the Cyborgs learn of the woman and the baby they list both for termination. To escape, she takes a stolen Cyborg ship and transports back in time to East Africa in 1980, where the mother is killed, but the baby is saved. It takes 20 years, but the Cyborg bounty hunter Nebula finally locates the girl, named Alex, and travels back in time to terminate her.

Review: Olivier Gruner isn’t in this one, and apparently his character gave up the fight against the cyborgs because the narration at the beginning tells us that they won the war against the humans.  This is a great set-up to a movie that doesn’t really take place in that particular future, in what would then be called Cyborg America.  Instead, we are told that a renegade doctor designed a super human to stop the cyborgs from taking over.  He has the female child and her mother sent back in time to alter the course of history.  They are sent to Africa in 1980, and it is there where the child, Alex, grows up to learn her warrior skills. Twenty years later, and without a mother, Alex has turned into a muscular female Schwarzenegger with blonde dreadlocks (she was raised by the natives).  Just in time for her rites of passage, a cyborg (nothing like what we saw in the first film) comes to eliminate her before she has a chance to make good.

This was a shortsighted approach to a promising franchise.  Albert Pyun directs with his usual flare for action and motion, but the movie is short and completely under populated.  The whole thing pretty much takes place in one or two outdoor locations and is little more than a chase.  Alex is left alive, which suggests more peril for her in future sequels.  Sue Price is Alex, and she’s good.  I liked her.  Like Kathy Long in Knights, she is a little green, a little awkward with her muscular frame.  She grows on you, though.  This entry is a rehash of Predator, and that is not necessarily a bad thing.

Plot: Alex again fights the cyborg mercenaries in 1998 East Africa. This time, Alex finds that she has 20 half sisters who are waiting for her to return to 2077. Central Command wants Alex captured alive and scanned to see if her DNA is a strong and more powerful strain than the normal. But Alex may be too tough for Farnsworth to capture.

Review: Alex (Sue Price reprising her role from part 2) wakes up shell-shocked in the deserts of East Africa, without a memory. We know what happened to her, because this takes place immediately after the events of the previous film. Bloody and battered, she gets up and is approached by a hunter from the future, a cyborg named Farnsworth II (Tim Thomerson), who toys with her at first and then when she begins to figure out who she is, the hunt is on. She escapes him and joins some mercenaries in a vague revolution, but is constantly sidetracked when other hunters from the future (two wigged-out buff chicks) join Farnsworth in trying to capture or kill her for her DNA. Since she’s bleeding all over the place, it seems strange that they don’t just take a swab to her gashed leg or whatever. Alex spends a lot of time shooting guys who keep getting back up and then driving around the desert in a dune buggy. We find out that she has 20 sisters in the future, two of which have travelled back to her time to help her survive.

This third entry is the weakest of Albert Pyun’s Nemesis saga. It feels like he ran out of money by the time he finished part 2, and so there’s a drastic pull back in action and an increase in post-production manipulation that adds weird (but super cheap) special effects. Sue Price narrates her experience this time in a confused voice over, which was probably an after thought when Pyun realized no one would understand what was going on. Rules that the second film tried to establish are ignored, so if you’re trying to make sense of all this, good luck. This one ends with a gimmick preview of a fourth entry, but the film Pyun made instead has little or nothing to do with what he promised at the end of this one.

Plot: Alex shoots again. She has to kill a man, but shoots the wrong one. A high ransom is set on her, so she is visited by some headhunters. Well, she only could sit and wait and hope for a friend’s help.

Review: This fourth entry is awkward and confusing.  Sue Price is Alex, but is she the same Alex from the previous films?  Assuming she is, then that would make her about a hundred years old since she was about eighteen or nineteen in Nemesis 2 which took place around 1994 (she was sent back in time as a child to 1980), and this entry is supposed to take place nearly a hundred years later.  The Cyborg War is six years over, and the planet is very sparsely populated.  So sparsely populated that there are never more than two or three actors on screen at any given time (probably a budgetary issue).  Alex is now a paid assassin, and she’s tired of her job.  She kills cyborgs, and when she receives her final assignment, she botches it up by killing the wrong machine.  An angel of death-type character stalks her through the ruins of a European city until their final fatal confrontation.  Alex calls on a former lover to execute her so that her death feels more welcome than it would be otherwise.  Some secrets are revealed, and she decides to double cross her boss, and she lives to fight another day.

Sue Price spends almost the entire film without any clothes on, and that makes for some of the most awkward nude scenes I’ve ever seen.  She’s extremely buff.  Her character is much altered from the previous two entries in the series, and it was almost sad to think that she let this one happen.  Pyun hacked this one out, and without titles or end credits, this movie runs just over 60 minutes.  Cheaply done, and it shows.

MVD Rewind’s triple feature Blu-ray of these films is welcome for Pyun fans and fans of the franchise. I’m not sure they will be of interest to anyone beyond that, but it’s nice to finally have these movies available in high definition widescreen. Pyun provides some commentary on portions of the films, and trailers and a foldout poster are included. Personally, this stuff is totally my jam, and I’m thrilled that Pyun’s work is finally available to enjoy the way it was intended in widescreen. Kudos to MVD for taking the time and effort to release this material on Blu-ray. 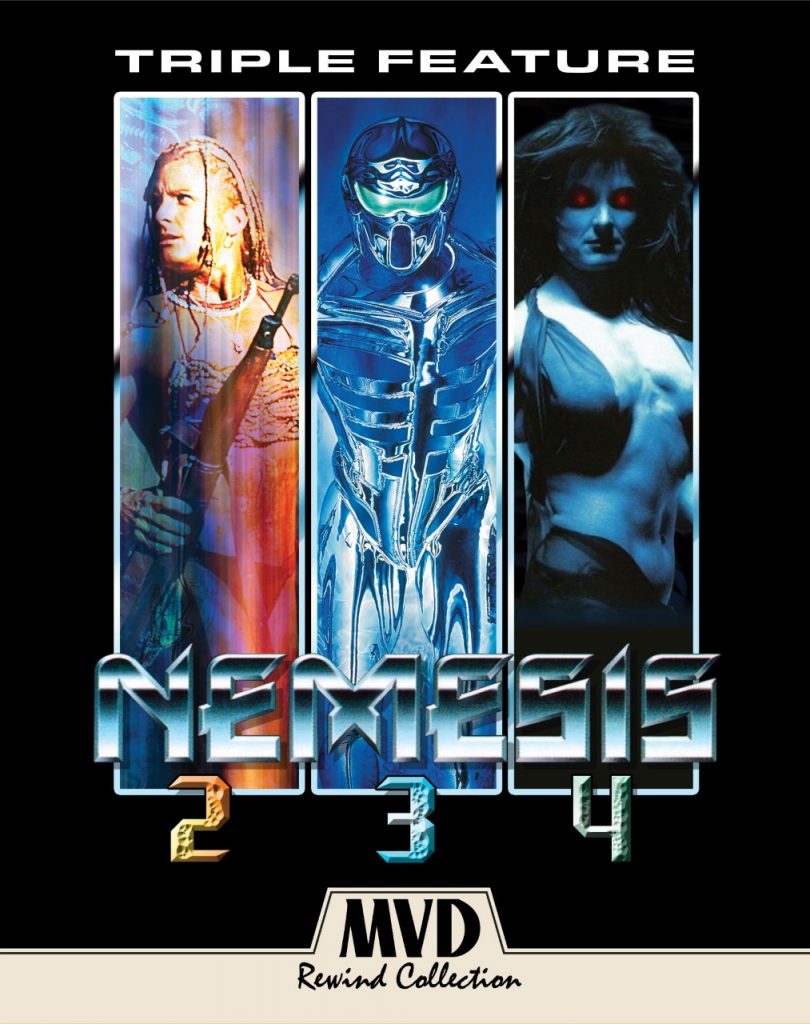