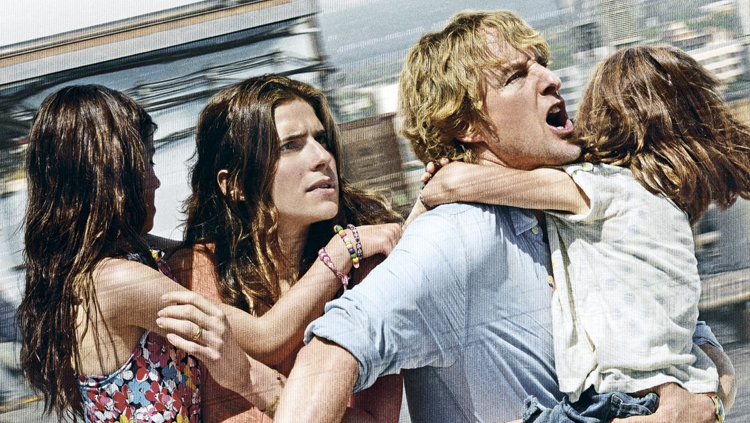 The pure, unadulterated tension that builds throughout the harrowing No Escape is due in part to Beltrami’s and Sanders’ remarkably effective music in the film

Lakeshore Records Soundtrack Review: From the Brothers Dowdle – the team behind hardcore horror films such as As Above, So Below, Devil, and Quarantine – the cinematic action / horror / thriller hybrid No Escape finds itself at a crossroads between The Purge and The Raid, focusing on an innocent American family while they’re visiting a far Eastern Asian country during an unfortunate moment when the government is overtaken by a coup, instigated by a ruthless militia intent on cleansing the land of anyone they deem a threat to their new order.

Jack and his wife Annie (Owen Wilson and Lake Bell) and their two young daughters (Claire Geare and Sterling Jerins) have flown across the world to Thailand to restart their lives, as Jack has just gotten a new job working with a water company. It’s not the job Jack or Annie wanted him to have, but it’s what they’ve been given, and hard as it may be to accept, it’s all they’ve got. The long flight wipes them out, and when they land, they accept a ride to their hotel from a friendly British guy named Hammond (Pierce Brosnan, always great in character roles) and his Thai buddy – a bus driver who calls himself Kenny Roger (Sahajak Boonthanakit).

What none of these people know is that a coup has already taken place in the government, and that the Prime Minster has been assassinated. There’s already unrest in the streets, and an armed, bloodthirsty militia has geared themselves for an all-out slaughter of foreigners and sympathizers. By the next morning, a mini apocalypse has erupted, and when Jack finds himself in the crossfires of a riot (he went out to buy a newspaper down the street), he witnesses the heinous murders of Americans committed in the streets, and just like that he’s on the run for his life. He barely makes it back to his hotel in time to warn Annie and save his two girls before a systematic, hotel-by hotel and floor-by-floor bloodletting at the hands of the crazed militia kills them, and the only recourse is to find a way to a safe zone. And that’s when it becomes clear that there is no safe zone, and if you happened to miss the title of the film, it’s called No Escape.

One of the busiest and most prolific and talented composers of this post-millennial era is Marco Beltrami, best known for his Academy Award-nominated score for 3:10 to Yuma and pulp comic and science fiction scores for films such as Hellboy, Fant4stic Four, and I, Robot. Beltrami, working with co-composer Buck Sanders, his collaborator on films such as Max Payne, Blade II, and The Hurt Locker, has crafted a tight, rhythmic score for No Escape that captures a deep, dark dread paired with an ethnic flavor reminiscent of the Hans Zimmer score to John Boorman’s Beyond Rangoon.

The pure, unadulterated tension that builds throughout the harrowing No Escape is due in part to Beltrami’s and Sanders’ remarkably effective music in the film, and the music will be available for purchase on October 2nd, courtesy of Lakeshore Records. It may not be a “must” purchase on CD for your hardcopy collection, but it may be a satisfying download purchase from iTunes.