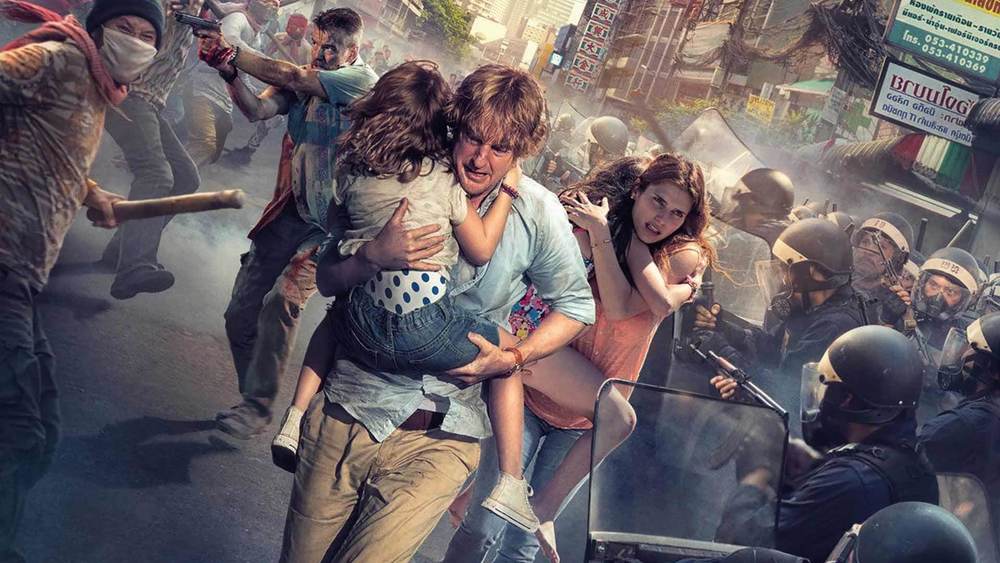 If you’re ready to be put through the wringer and come out alive by the end, get ready for No Escape.

Plot: American businessman Jack Dwyer (Owen Wilson), wife Annie and their two young daughters arrive in Southeast Asia to begin a new life. As his company plans to improve the region’s water quality, the family quickly learns that they’re right in the middle of a political uprising. Armed rebels attack the hotel where they’re staying, ordered to kill any foreigners that they encounter. Amid utter chaos, Jack must find a way to save himself and his loved ones from the violence erupting all around them.

Review: Let’s just get this out of the way: No Escape blindsided me. It didn’t just creep its way up from the depths where truly scary things come from, no, it jumped up right at the start and reared its ugly head and pummeled me with fright. This is easily the scariest and most thrilling movie of 2015, and it doesn’t even have ghosts, monsters, or whatever Hollywood thinks is scary these days. This is a movie where chaos and humanity without law, order, or conscience has free reign, and if you’ve ever been to another country, you know that being at the mercy of foreign law and its people under that law is part of the package. It’s like The Purge without the goofy socio-political subtext.

Jack and his wife Annie (Owen Wilson and Lake Bell, both well cast) and their two young daughters (Claire Geare and Sterling Jerins) have flown across the world to Southeast Asia to restart their lives, as Jack has just gotten a new job working with a water company. It’s not the job Jack or Annie wanted him to have, but it’s what they’ve been given, and hard as it may be to accept, it’s all they’ve got.

The long flight wipes them out, and when they land, they accept a ride to their hotel from a friendly British guy named Hammond (Pierce Brosnan, always great in character roles) and his Thai buddy – a bus driver who calls himself Kenny Roger (Sahajak Boonthanakit). What none of these people know is that a coup has already taken place in the government, and that the Prime Minster has been assassinated. There’s already unrest in the streets, and an armed, bloodthirsty militia has geared themselves for an all-out slaughter of foreigners and sympathizers.

By the next morning, a mini apocalypse has erupted, and when Jack finds himself in the crossfires of a riot (he went out to buy a newspaper down the street), he witnesses the heinous murders of Americans committed in the streets, and just like that he’s on the run for his life. He barely makes it back to his hotel in time to warn Annie and save his two girls before a systematic, hotel-by hotel and floor-by-floor bloodletting at the hands of the crazed militia kills them, and the only recourse is to find a way to a safe zone. And that’s when it becomes clear that there is no safe zone, and if you happened to miss the title of the film, it’s called No Escape.

Jack – an everyman armed only with his raw instinct to survive – absolutely must survive and protect his family, and as he leads them through a layered hellscape of bloody murder, mayhem, and unpredictable carnage, I as an audience member felt afraid for not only this unarmed family, but for myself as a spectator of their terrible odyssey. I honestly just wanted the movie to end. It was a roller coaster of unprecedented thrust and horror, and it definitely leaves a lasting impression because I was consolably relieved when it was over.

I didn’t realize until after the film was finished that it was directed by John Erick Dowdle, who made 2014’s scariest film As Above, So Below, which gave me the same dreadful feeling in my guts while I was watching it. No Escape does something really interesting with the horror and thriller genre by setting it entirely in a real world with no fantasy elements and it pulls off a feat of great magnitude by scaring the fudge out of you. If you’re ready to be put through the wringer and come out alive by the end, get ready for No Escape.