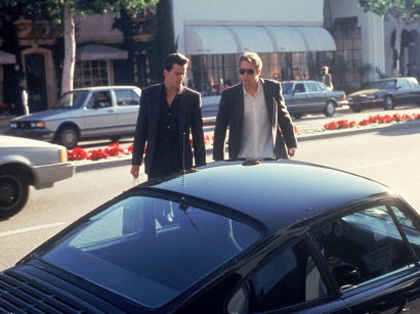 ‘No Man’s Land’ is a good action thriller that deserves a look.

Plot: When an undercover detective is shot dead while investigating a string of Porsche 911 thefts, Lieutenant Vincent Bracey (Randy Quaid) assigns 22-year-old San Diego officer Benjamin Taylor (D. B. Sweeney) to infiltrate a Porsche garage suspected to be a front for the grand theft auto scheme. Benjy is chosen because of his extensive mechanical knowledge of German cars and his rookie status, which dissuades others from suspecting that he is a cop. Bracey wants Benjy to obtain evidence that millionaire playboy Ted Varrick (Charlie Sheen) is the mastermind behind the thefts and the murder of the detective. Before he knows it, Benjy and Ted become fast friends and he starts to succumb to the lure of the high flying and risky lifestyle.

Review: Like so many movies in the 80’s, ‘No Man’s Land’ is one of those gems that very few people saw at the theatre. Thankfully, with the explosion of the home video market, it found a sizable cult following. Written by Law & Order creator Dick Wolf, this movie is very much an 80s film noir. It shows ordinary people with flaws, who get their comeuppance when they give into temptation. The plot is somewhat cliched with the good cop befriending the man he is there to take down, and dealing with his conflicted allegiances. It is clear that this film was a major inspiration for ‘The Fast and The Furious’ , and it is nice to see the origins.

One major differentiation of course is the lack of CGI. The car chase sequences are all done old school and they look fantastic. (Sure, the odds of a Camaro and an Oldsmobile land yacht being able to keep up with a Porsche 930 are very doubtful, but hey…)

D.B. Sweeney does a serviceable job as the rookie cop. He always looks seconds away from giving up his real identity and does what he can with the material. Some of the lines are very corny but everyone seems invested in their character so it works. Randy Quaid is a bit over the top with his ‘tough but fair’ police lieutenant portrayal. He seems angry for no reason and can easily qualify for the ‘one more screw up and I will have your badge’ movie police chief hall of fame. Charlie Sheen though really owns this film. Long before he became the crazy chain smoking, porn star marrying, punch line – he was a chain smoking, porn star dating, Hollywood heavyweight. His roles in ‘Platoon’ and ‘Wall Street’ (which book-ended his role in ‘No Man’s Land’), had him tipped for greatness. He plays the role as if he was playing himself. A man who has grown up with money and privilege but for some reason finds that is not enough and carries around a great deal of emotional baggage. As Ted, he is not a cut and dry bad guy. He very much encompasses a lot of characters we saw in this era, particularly in films like ‘Less The Zero’ and ‘Bright Lights, Big City’ – all style and no substance. They spend so much time trying to create an image, their real persona barely even exists anymore.

The soundtrack is provided by the late Basil Poledouris (Conan The Barbarian, RoboCop, The Hunt For Red October) and is perfectly suited for this film. A pure electronic score that manages to be cold and eerie, fast paced and bleak. On its own not remarkable or particularly memorable, but a nice companion piece for the images.

The film of course is not without its flaws; the aforementioned dialogue, the unnecessary sub-plot with rival car thieves, and a few throw away scenes that serve no real purpose. The ending sadly is probably the weakest part of the film. With all of the twists and turns, when we finally get to the big reveal all the tension is wasted.

All in all, ‘No Man’s Land’ is a good action thriller that deserves a look.