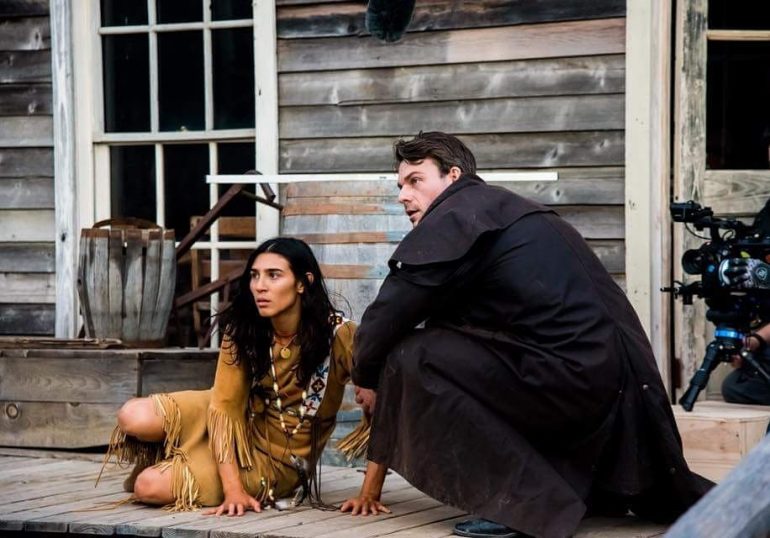 No Man’s Land feels like a rushed straight to DVD mess that will likely be forgotten by most. Hard to recommend even for massive Western fans.

Plot: Rusty (an okay Chris Routhe) is injured via gunfire by a lead bandit (a monotone yet miscast Carl “The Coach” Bailey) after the bandit fatally shoots his son and kidnaps his wife (a nonexistent Brooke Lyons). With his Taken-esque special set of skills and the help of a Native American girl (Lorena Andrea), Rusty confronts the kidnappers. It turns out that his wife has now been captured by Comanche warriors. Is she dead or is there still hope that he can rescue her in time?

Review: No Man’s Land is another messy by-the-numbers The Searchers-type Western. While it surprisingly has competent lighting and camera (unlike what you get in a Barnholtz Entertainment type release), it still feels like an extended student film trying to be as big as a typical episode of Hell on Wheels. The characters serve as either exposition or as someone for the main character to argue with but the world they’re in is barely realized and you don’t care who lives or dies due to everyone being one-dimensional. The Faith based filmmaking approach also ruins this because several times there are hints of brutality such as eye gouging, bruises and gunshots and then hurried up cutaways. This shows that the movie is unwilling to give us the full lowdown and it also makes for an underwhelming Action picture. Show us it, imply it but don’t do half-and-half, that’s a cop out.

The first 8 minutes will have one hollering unintentionally alone as Rusty’s kid takes out a gun (which is never foreshadowed that he knew how to use) and he is then shot by the lead bandit unconvincingly. After Rusty buries his son, he then saves a Native American gal from a bandit in a church by hitting the guy upside the head with a Bible study book. It’s that kind of movie and the final fight scene with the Comanche gang looks like an over-choreographed martial arts duel.

The movie focus is very unorganized and only remains a must-see for bad movie lovers who might want to see some of the above mentioned crappy fights as well as an unconvincingly edited alligator attack. Everything is so rushed and looks like bottom of the barrel DTV material that it can all get dull quickly. What is even the main focus? Did the character need his faith to do what he did? How did he even become a badass to begin with? Why did we care about the predictable obstacle courses when neither he or the various villains have any backstory?

Avoid another ego-driven Maverick Home Ent. worthy release, Action fans. For serious minded fans who like indie Westerns, check elsewhere in the Walmart bins. For so-bad-its-good aficionados, this is not worth any money to watch almost 10 seconds worth of amusingly inept yet rather sparse fight scenes.