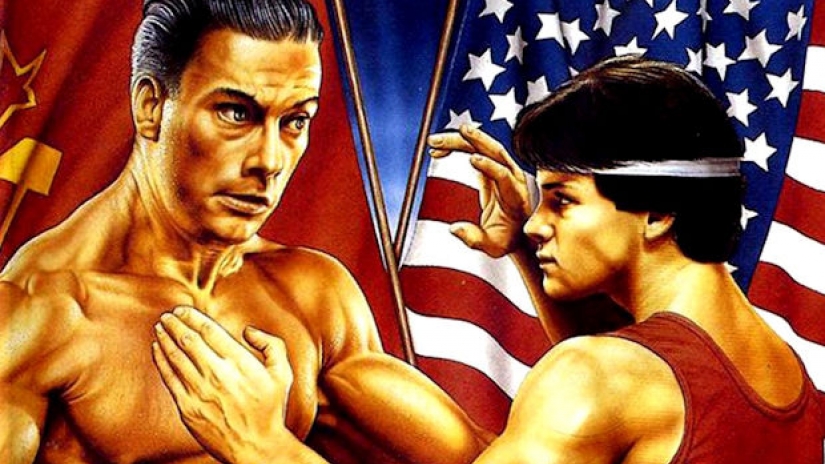 Well worth the price to own, No Retreat No Surrender has finally come home.

Review: A knee jerk reaction to The Karate Kid, this low budget film is best known for giving Jean-Claude Van Damme one of his first roles. He’s only in it for two scenes, but he makes an impression. The story is simple: Jason (Kurt McKinney) studies at his father’s dojo, but when his father is humiliated and wounded by an enforcer (Van Damme) of a crime syndicate, Jason’s relationship with his dad is altered. His father quits teaching martial arts and moves his family to Seattle, where Jason has to rebuild his life as a teen. He idolizes Bruce Lee so much that he virtually worships him at his gravesite. Lee’s ghost visits him and becomes his mentor until Jason is finally able to accomplish the physical feats he aspires to. A local dojo bars him from training there (because of lies a bully tells about him), which makes life even harder for him. He finally gains his dad’s respect by saving his life outside a bar. The film’s big climax centers around a martial arts tournament in a boxing ring, and lo and behold, Van Damme is the guy annihilating everyone who opposes him, including all of the guys at the local dojo. Jason rushes in to save a guy’s life, and manages to beat Van Damme.

Filmed in such a way that mirrors silent movie theatrics and Hong Kong-style filmmaking, No Retreat, No Surrender is fun and ridiculous. The theme song, Hold on to the Vision, plays about five times on the soundtrack. Several sequels followed, but each one is unrelated to the one that came before it. Corey Yuen directed the first two.

Kino Lorber has just released a very welcome Blu-ray of this film. It contains both the North American release (85 minutes) and the 94-minute international cut (both in 1:85:1 widescreen!), which is a big deal. Also included on the disc are an audio commentary by screenwriter Keith Strandberg, and an on-camera interview with Kurt McKinney. Well worth the price to own, No Retreat No Surrender has finally come home.