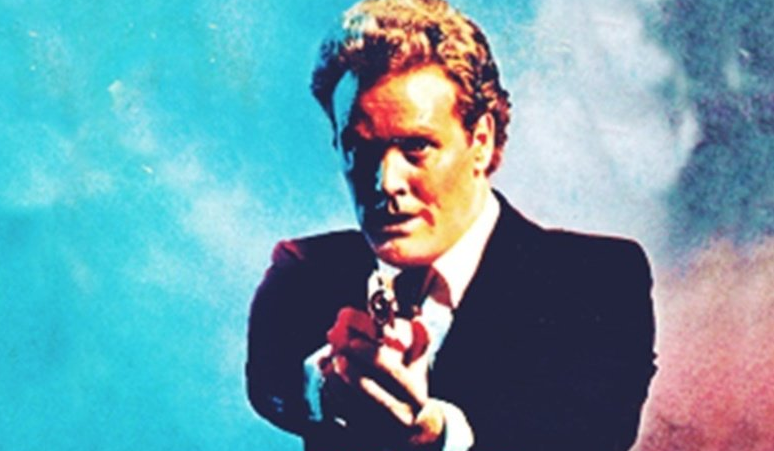 A clever little revenge picture, with Wings in psycho-mode as an unstrung CIA Agent, is undone by a messy finale and needless plot twists. Wings and Robert Tessier make it worthwhile.

Pot: When his brothers and mother are viciously murdered by a drug cartel, a CIA Agent goes on the warpath in his quest for bloody vengeance.

Review: Almost anything with Wings Hauser is worth a watch. The man is the bomb when it comes to playing unhinged macho types with itchy trigger fingers, and his performance in No Safe Haven or NSH from here on in, is no exception. Chewing scenery as a vengeful CIA Agent after the drug barons who killed his family, Wings wastes no time in establishing his credentials when he goes on a bar crawl, bangs a hooker and shoots some beer cans. We know, in his hands, we are in for an entertaining B movie that won’t take itself too seriously.

After dispatching a villain in a rather brutal manner, and proving he’s deranged by taking pictures of the event, Wings decides he might need a partner – an enlists the help of good-natured merc, Randy (Hard Times tough guy Robert Tessier), who is more than willing to help a friend in need. The pair’s partnership is the comedic highlight of this 80’s actioner, and Wings and Tessier have some serious chemistry. Their arrival in South American is pretty funny and would likely have the WOKE brigade flipping their crap at their antics.

Movies like NSH live or die by their action scenes, and although things get off to a dicey start with a car chase that’s played in fast forward (!), things calm down and we settle into some regular, good ol’ fashioned carnage with excessive bloodletting and explosions. Hell, Wings even sets one of his foe’s alight and gives him the choice of burning alive, or jumping to his death from a balcony for faster relief.  In this regard, NSH takes no prisoners, or plays no favourites, especially when a lead villain is horribly killed at the end of the second act. Twice!  Wings shows once again, that he’s got the acting chops to pull off a deranged, but sympathetic, character capable of extreme violence and great sorrow.

As a B action movie, I had no complaints with NSH, until the final act when the director tried to turn the film into the classic Arnold film Commando – but without the money or crew. Wings and Tessier storm a South American drug cartel compound, and with a fully decked-out chopper, lay waste to everyone and everything in their path, but the film doesn’t have the funds to pull off this gargantuan task, and it all looks a little cheap and under done, despite everyone’s  best efforts.  Another problem is the love interest to Wings.  Although the actress is very attractive and her performance is more than fine, the subplot seems tacked on, and rather pointless, given the unnecessary twist that takes place at the end that is never properly explained.

Overall, NSH is a mixed bag. It’s got some good action, and Wings and Tessier make a great pair, and genre fave Branscombe Richmond hams it up as an OTT villain, but the last act gets buried in ridiculous plot twists and cheap-looking action. If you like Wings, like I do, it’s definitely worth a watch, but NSH is not up there with his masterworks like Vice Squad, Deadly Force or Mutant.