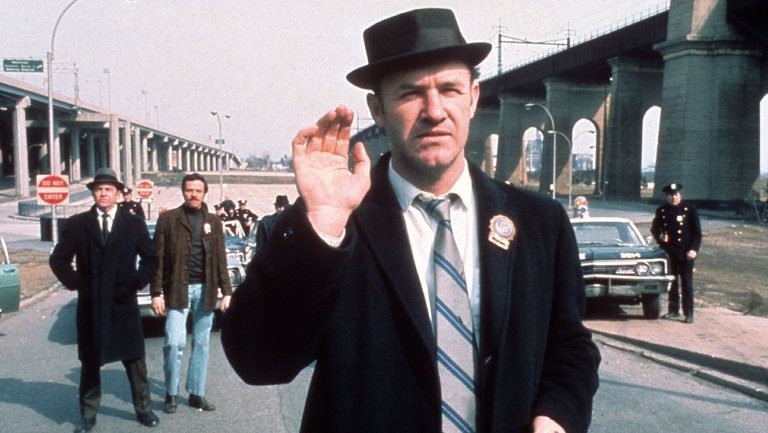 The Academy of Motion Picture Arts and Sciences, the institution behind perhaps the most craved-for award in the world of cinema, is pretty selective when it comes to the productions they give out their golden statuettes to. The so-called “popular genres” can usually expect to win awards for their soundtracks, visual effects, sound editing, music, perhaps their costumes and makeup. Those who bet on the Oscars have, in turn, learned over the years not to put their money on horror movies, science fiction flicks, let alone action movies. In a way, it is understandable – these movies are not made with artistic values in mind but entertainment and box office revenues. There were, in turn, awards ceremonies where even the most optimistic Oscar punters were surprised – when movies with loads of action, entertainment, and box office revenues took home the most prestigious statuettes.

Two New York cops from the Narcotics Bureau try to intercept a massive heroin shipment that comes with a “French connection” in the person of Alain Charnier, a suave French gentleman who is, in fact, the biggest supplier of pure heroin in the United States. While the movie is a bit slow by today’s standards, it is a masterpiece nevertheless. The film’s protagonists are out of character: Popeye Doyle (Gene Hackman) is a gritty, unlikeable police officer – an antihero, so to say – while the villain is a funny, lovable gentleman with manners, looks, and a likable attitude.

“The French Connection” is a slow-moving thriller with enough brutal action sequences to classify it as an action movie. And it has five Oscars to show off: the Best Picture, the Best Actor (Hackman), the Best Director (William Friedkin), Best Writing (Ernest Tidyman), and Best Editing (Gerald B. Greenberg).

Oliver Stone’s “Platoon” is officially classified as an “anti-war” drama but it has enough on-screen military action – the gory, R-rated kind. It’s a realistic look at the horrors of war, where there is nothing heroic about defeating the enemy – especially since the enemy is not the Viet Cong, not the disease-carrying mosquitoes or the merciless jungle but the insensitivity induced by the constant danger and pointless killing. Ultimately, the story comes down to a classic good versus evil moral dilemma, with Sgt. Elias (Willem Dafoe) in one corner, and Sgt. Barnes (Tom Berenger) in the other. All this told from the point of view of Chris Taylor (Charlie Sheen), the rookie put in the middle of a pointless war.

“Platoon” won the Oscar for the Best Picture, and Oliver Stone took home the statuette for being the Best Director in 1987.

Horror movies almost never win prestigious awards – and they are rarely true blockbusters, to be honest. With one notable exception: The Silence of the Lambs. Jonathan Demme’s adaptation of Thomas Harris was not only a blockbuster (it scored more than $270 million in theaters in 1991, equal to around $500 million today) but it also went on to win five Oscars: Best Picture, Best Actor (Sir Anthony Hopkins), Best Actress (Jodie Foster), Best Director (Jonathan Demme), and Best Writing (Ted Tally).

The movie tells the story of Clarice Starling, a young FBI cadet who has to turn to the brilliant manipulative cannibal Dr. Hannibal Lecter to catch a serial killer. While the movie is officially credited as a crime thriller, it has enough elements from the psychological and slasher horror genres to qualify as one.