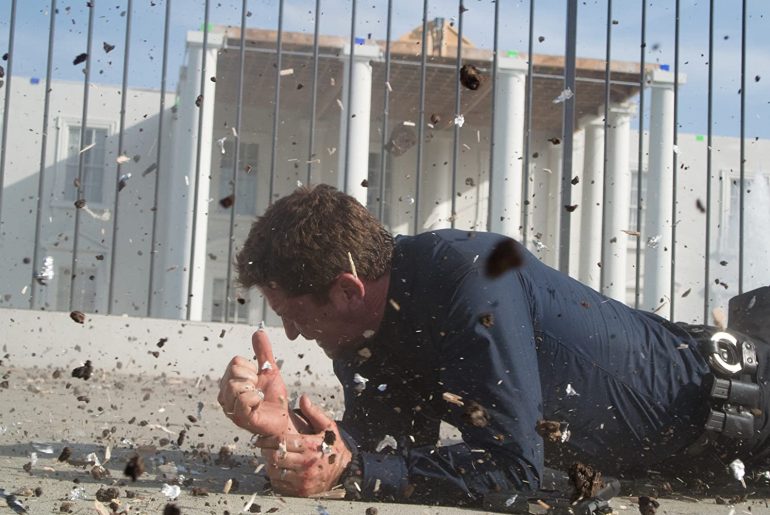 Who would have thought that seven years ago, when Antoine Fuqua and Gerard Butler mounted a March action thriller about terrorists taking the White House, that this would be the launch of a highly-successful franchise? Now, three films in, and with Gerard Butler committed to doing three more Has Fallen movies, as well as potential television spin-off shows, this has to be called one of the most successful of recent action franchises. However, as we look back at these three films, the question needs to be asked – which one is the best?

Story: The story for the original Olympus has Fallen movie is really quite simple. The President has been captured by a North Korean terrorist group, lead by Rick Yune’s Kang, and they are basically going to force the President to compromise America’s position in Korea while simultaneously destroying the States. The movie is a one-man-gang scenario for sure, with Butler’s character taking on the familiar guise of John McClane or Casey Ryback. There are red herrings, tense encounters, and last-minute saves, all hallmarks of the action film genre. While I don’t think it brings anything particularly new to the playing field, I think it generally is a well-executed and entertaining story that provides you with all that you would want in a movie of this type.

Characters: One of the main strengths of Olympus Has Fallen is its characters. Gerard Butler, playing Mike Banning, is everything you would want in a hero – resourceful, resilient, and uncompromising, he’s the sort of earnest, idealistic protagonist that it’s easy to get behind. Rick Yune is terrific as the cold-hearted Kang, who takes a malicious glee in the atrocities he performs while avoiding unnecessarily hamming it up as the chief bad guy.  Aaron Eckhart, Morgan Freeman, Melissa Leo, they’re all professionals, and while their roles are somewhat one-dimensional as the idealized version of what a president and his cabinet would act like, the reason they can get away with it is because of the weight of their portrayals, most notably Leo who has an uncomfortable scene where she is tortured, yet refuses to give in.

Action: There’s a ton of action in this movie, beginning with the opening twenty minutes, which sees a harrowing accident on a bridge.  Of all the action, though, the most impressive is definitely the siege on the White House.  It’s beautifully shot, especially the sequence of the gunship shooting up the White House and the surrounding streets.  The carnage is a sight to behold.  Likewise, when the military erroneously decides to attack the White House to retrieve it, again, there’s a great scene where the bad guys use an anti-aircraft system mounted to the White House’s roof to annihilate the attacking force. Mix in the various action scenes of Banning taking out terrorists within the White House, and you have an exciting mix of scenes that are once again, well-choreographed and well- filmed, allowing you to see all the blows and all the action.

Story: As well told as the first movie’s story was, I think this one is at least an equal. Sure, it’s a bit messy with all the bad guys running around, and that whole storyline with the MI5 mole was a little out-of-nowhere, but I think what this story’s strength is the focus on the activities of the Banning and Asher characters.  It just feels very tight and suspenseful, as the film feels much like an hour-and-a-half chase through the streets of London. Sure, there are cutaways because we have to know what Morgan Freeman and gang are doing back in the U.S. to help out those two, but it’s mostly Banning and Asher running around and reacting to the crazy danger that seems to be hitting them every two minutes. While there’s no real twists, red herrings, or other story elements that are all that shocking (the messy MI5 turncoat sequence notwithstanding), the movie plays very effectively to its strengths of constant danger and suspense.

Characters: While most of the main characters from the first one are back, and are just as good in their roles this time as they were in the last one, I really liked how they approached the villains in this one. As opposed to the first one, where Rick Yune is a cold, calculating, but unsympathetic madman, you can sort of see where these guys are coming from.  Because of the actions of the good guys at the beginning of the film (which was well-meaning, but ultimately misguided), they, in fact, made an active enemy out of someone who was more of an enabler in the past.  This makes them a bit more sympathetic, though ultimately, there is no excuse for their actions, you have the irony that Asher and his colleagues had a hand in their own misery in this film. I also really liked Charlotte Riley in this one – while she didn’t have much to do, she has a quiet strength and confidence as the MI6 character.

Action: Whoo-boy, the action in this movie really amps up from the first film.  The initial attack on the G7 leaders is impressive, with the attacks taking place in several different manners and locations that spices up the potential humdrum of “oh, the good guys are just being attacked again by the bad-guy terrorists.”  After that, the action never seems to let up, as Asher and Banning careen from one life-threatening situation to another, from being chased by bad guys through the streets, to trying to evade missile attacks while in helicopters, to (my personal favourite), the uniquely-shot blitz on the terrorist stronghold in London.  You never really feel like you have a chance to catch your breath in this film (which makes sense – if the two main good guys can’t stop for one minute, why should you?), and it is all capped off marvellously with a terrific explosion at the end. As much as the first film delivered the goods in the action, I think this one goes at least one step further.

Story: The story of Angel Has Fallen is a tale of two perspectives.  On the one hand, you have to commend Butler and co. for not doing the same-old, same-old – you know, having the bad guys take over a place where the President is, take him hostage or chase him through the streets.  After all, they’ve already taken over both the White House and London – what was next, take over an entire country or continent?  So, you have to give them props for doing something new. Unfortunately, they also telegraphed parts of it, especially the identity of the villains, who you kind of know the identity of shortly into the movie. It leads to a lack of suspense, especially when it’s trying to hide who Wade’s benefactor is when it’s obvious who it would be. It leads to some unnecessary parts where the movie is still trying to make you believe that you don’t know who is truly behind it all, when it’s very apparent.  Other than that, the movie’s story is relatively run-of-the-mill, with no real surprises or intrigue.

Characters: This installment only had a couple of characters back, which leads to some interesting new blood infused in the franchise.  Danny Huston is always an effective heavy, and he does his usual yeoman’s work as the chief villain in this one. Tim Blake Nelson is a terrific character actor, and Jada Pinkett-Smith is a quietly robust presence as the FBI agent on Banning’s trail.  I think the best newcomer, though, is undoubtedly Nick Nolte as Banning’s long-lost dad. Nolte always seems to know how to play out both the humour and the pathos in any role he’s in, and this is on display prominently throughout the movie. With the film being filled with earnest, tough guys and women, it’s nice to see someone who isn’t afraid to play the role a bit for laughs, while not deteriorating to buffoon status. Kudos too to Piper Perabo for stepping into Radha Mitchell’s shoes – it’s never easy to replace an actor who has appeared in the same role previously, and I think she added more to the character than Mitchell had the opportunity to do in the previous two films.

Action: While I don’t think it’s entirely on par with the first two films as far as action goes, that doesn’t mean the movie is devoid of thrills. If I think of memorable scenes, you have to point out the drone strike on the President at the start of the film, the siege on Clay Banning’s cabin in the woods and the final confrontation between Jennings’s commando unit and Mike Banning and the secret service.  Even the training exercise at the beginning wasn’t bad.  I think the best thing about the action though, is the explosions – for some reason, they just seemed better in this film, I don’t know if it was how they were shot, how they were set up, a combination, or what, but the explosions seem more spectacular and more destructive in this film than usual.  I mean, they destroyed half of a damn hospital in this movie, what more could you want?

All three movies have their moments, and I think the one consistent review that you can give them is, they’re all entertaining.  For my money, though, I believe that the first sequel, London Has Fallen, is the best one. There’s just so much going on, the action sequences are bigger, the action is more relentless, and just the way that siege was filmed when Banning and the SAS squad are trying to break into the terrorist safe house, it was so innovative and exciting, it’s probably one of my favourite action sequences in any movie, period. While the other movies are pretty good, I think London Has Fallen embodies everything great about the Has Fallen franchise.