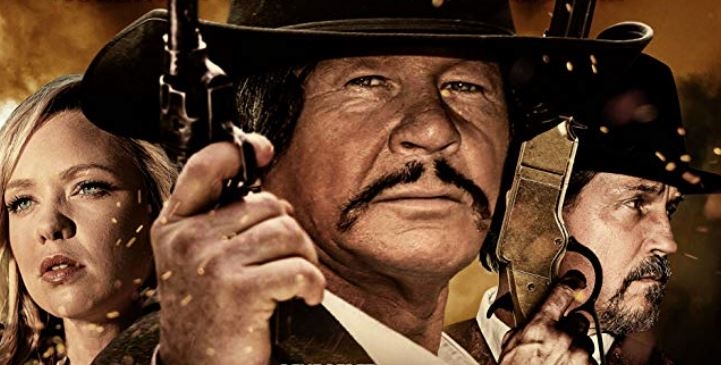 ONCE UPON A TIME IN DEADWOOD will likely not please fans of westerns or fans of the late Charles Bronson. An adequate lead performance by Robert “Bronzi” Kovacs and a beautiful northern California landscape are its strongest features and that is not enough to make up for all its other serious shortcomings.

Plot: A notorious gunslinger has three days to track down and rescue a kidnapped girl.

Review: Everyone dies. It’s a fact of life. Another fact is that people are left behind with every death: friends, acquaintances, family. When a celebrity passes on, you can add “fans” to that list as well. Family and friends will always wish they could have had more time with their departed loved ones. Fans have the same desire, but it manifests in wishing there was more of their idol’s work in the world to be discovered and enjoyed. Whenever a “lost” performance or piece by a long-passed artist is discovered, fans rejoice because they feel like they have a little more time with someone they care about.

Wanting that extra bit of time has a darker side though. Where it goes from celebrating an extraordinary life to exploiting it. Commercials with CGI recreations of beloved actors, touring holograms, and trashy biopics push beyond fondly paying tribute to a dearly departed icon into parading their memory around like a grotesque WEEKEND AT BERNIE’S- style farce. The people who do this hope that nostalgic love will lead to devoted audiences parting with their hard-earned money for a pale imitation of the object of their affection.

Which leads us to the films of Rene Perez and his leading man, Robert “Bronzi” Kovacs. Kovacs is a stuntman who bears an uncanny resemblance to a legendary cinematic tough guy, the late Charles Bronson. Rene Perez, a veteran filmmaker with over a dozen completed low budget features to his name, discovered Kovacs in Hungary and you can guess what happened next…

That’s right. Perez and Kovacs began working on a string of low budget films together that capitalized on the legacy of Charles Bronson. The latest of these is the upcoming western, ONCE UPON A TIME IN DEADWOOD. The film finds Kovacs as a mysterious but noble gunfighter known as “The Colonel” who has been coerced by a young woman, “Ursula” (Karin Brauns), into helping rescue her kidnapped sister. The man responsible for the abduction is a slaver named “Swearengen”, played by Michael Paré (STREETS OF FIRE). The Colonel and Ursula work together to rescue the girl and bring bloody retribution to the people who took her before it’s too late.

Tastelessness aside (exploitation films are often built on sleazy ideas, after all), that’s a solid foundation for a film: a stoic hero, dastardly villains, and damsels in distress. So, why does ONCE UPON A TIME IN DEADWOOD fail? The problems begin with Perez. His direction and flat, digital cinematography leave the film feeling like a sparse “Wild West” stunt show filmed in a national park. The northern California scenery and basic stunt work are impressive, but it never feels urgent or alive.

While there are a few stylistic flourishes, like POV shots of Kovacs firing off his six shooter, most of the action on display feels stilted and phony. For example, when Kovacs guns down bad guys he is often alone in the frame with sparse scenery around him, then it cuts to his adversary reacting to the gunshot in an equally empty environment.  Sometimes the only change in the action is how many bad guys drop when the camera cuts back to them.

These sorts of flaws can be smoothed over with an engaged cast and solid performances. The film stumbles here as well though. Karin Brauns is wholly unconvincing uttering the awkward dialogue of the script, also by Perez. Micheal Paré, despite his veteran status, does not fare any better. He recites his dialogue with no conviction before disappearing for long stretches of the film’s runtime. Even, his inevitable comeuppance falls flat as it appears that he was never in the same location with either Brauns or Kovacs, robbing their scenes of much-needed energy near the climax.

Speaking of Robert “Bronzi” Kovacs, it feels surprising to say this, but he is the best aspect of the film. He wisely doesn’t have much dialogue, allowing his look to overcome his obvious deficiencies as an actor and he is comfortable with all the physical things the role requires of him. Also, he knows how to pose well enough to feel like a heroic figure, even if his on-screen presence actually doesn’t feel much at all like the actual Charles Bronson.

That last thought sums up the biggest issue with ONCE UPON A TIME IN DEADWOOD. It never once feels like a genuine homage to Bronson. It’s there in the title and across the lead’s face but that’s where it ends. It lacks all the grit and swagger that his films possessed. ONCE UPON A TIME IN DEADWOOD feels like exactly what it is – an attempt to cash in on a legend’s goodwill. Charles Bronson’s memory and his fanbase deserve better than that.