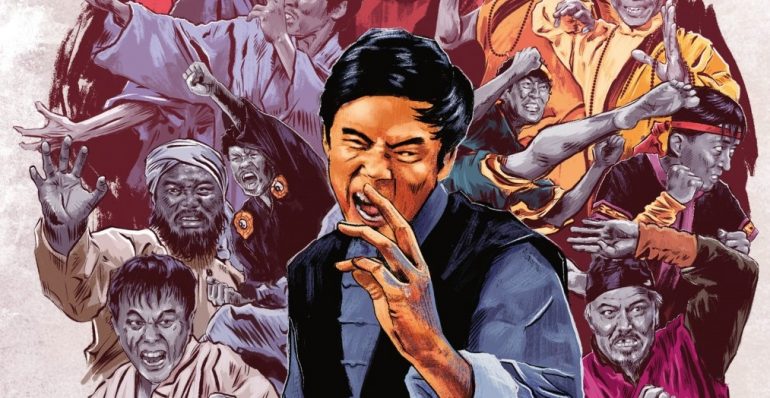 One Armed Boxer is a satisfying and easy to follow martial arts film with exhausting looking fights, outlandish villains, and a good score to boot.

Plot: A martial arts school is severely disrupted over a petty feud with a crime syndicate, and when the school’s most adept pupil loses an arm in the feud, he recuperates and learns to become a powerful fighter, using the arm he has left to get vengeance.

Review: It all starts when a couple of arrogant criminals walk into a restaurant and demand that one of its patrons surrender his exotic bird over to them: This act of bullying quickly snowballs into a series of events that eventually ends with dozens upon dozens of dead bodies and bloodshed. When a good Samaritan martial arts student named Yu Tian Long (Jimmy Wang Yu) steps in and defends the bullied patron, he beats up the criminals and sends them packing. They go to their home base, complain to their master and lie and tell them that they were humiliated by a well-respected martial arts school’s students, which prompts the crime lord to bring his entourage to the school for retribution. The encounter does not go as planned for the crime syndicate: Long’s master defeats the crime lord in a very humiliating display, which then sends the crime lord into a fuming rage. Licking his wounds and vowing to hire outside help in the form of Thai mercenaries proficient in Muay Thai, as well as various others, including a ruthless Japanese Judu killer, the crime lord revisits the school and demands a death fight with the students and their master, Long included. It’s a massacre: Long’s arm is severed in his fight, and all of his friends and even his master are completely wiped out in a devastating attack. Long survives, but it takes him months to recuperate and retrain himself under the tutelage of another master, who teaches him to hone his one arm into a killing appendage, a thing of merciless vengeance. When he’s ready, he’ll take his revenge on the crime syndicate and all of their hired thugs, one by one.

From director and star Jimmy Wang Yu and the Shaw Brothers (as well as Golden Harvest), One Armed Boxer is a satisfying and easy to follow martial arts film with exhausting looking fights, outlandish villains, and a good score to boot. Wang Yu (who only just recently passed away) made for an appealing hero, and he’s likable in this one, and when it was released it solidified his stardom as a martial arts action star. Its sequel was Master of the Flying Guillotine, but this film is much simpler and less fantastical.

Arrow Video’s new Blu-ray edition of One Armed Boxer is presented in a new 2K restoration, and comes with a new career retrospective of Wang Yu, plus a new commentary, a trailer gallery, and more than a half hour of trailers. Completists of the Shaw Brothers films will need to add this one to their growing collection.