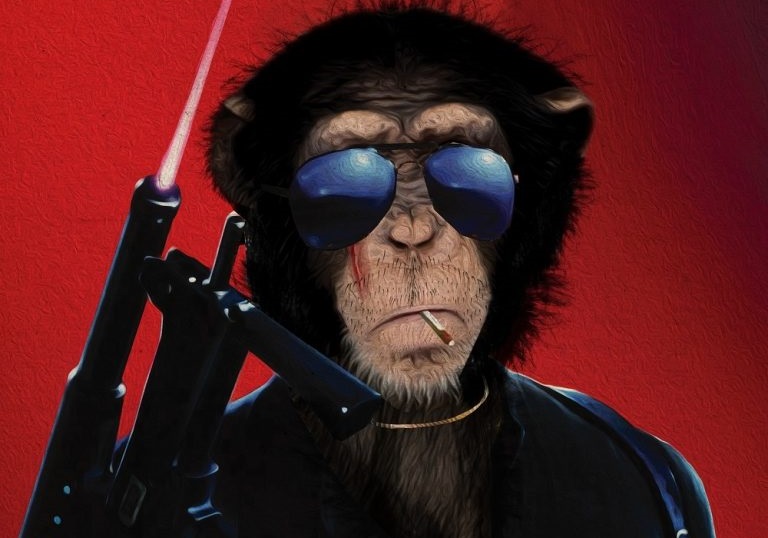 One Tough Bastard is a kaleidoscope of a meta retro action comedy buddy cop plot, with a protagonist equally as stylish.  It combines all the key elements of the action hero era and puts them into one original package that makes for source material all its own.

Plot: Reunited for an anniversary movie screening, when Moxie and Duke are targeted by assassins, the feuding co-stars reluctantly join forces to terminate with extreme prejudice an organized crime syndicate headed by an iconic German action star dealing death from his movie-themed fast food franchise.

“One’s a big dumb animal.
The other’s a chimpanzee.
Shit just got real.”

Review: Adam Howe displays his writing prowess in a manner comparable to which a legendary bar cooler does his talking by smashing kneecaps and wearing tight shirts in One Tough Bastard, described as a “neo-noir-meta-action-spectacle-page-turner” in the press release.  The story follows Shane Moxie, aka The Mox, aka Shane F****n’ Moxie, once a legend in the action movie landscape of the ’80s and ’90s, reduced to a has-been PCP addict taking (insisting on) bookings for screenings and Q&As for the apathetic and fickle indie hipster crowd.  Oblivious to his former co-star Duke – a chimpanzee of incredible intelligence with a voice program based on Kevin Spacey – being the real draw for the mass audience, The Mox puts himself over in a way that would make Ali proud before the theater is attacked and he barely makes it out alive… through the assistance of his onscreen partner and rival.  The plot thickens via a crime syndicate headed by a Schwarzenegger-inspired former German action icon, a femme fatale, and plenty of environmental interaction to bolster the action scenes.  Further strengthening the effort is the occasional faux-review of Moxie’s films, illustrated with their own Cannon style movie posters.  Will the aging action figure and his anthropoid ally find the same chemistry in real life that they captured as lightning in a bottle on film?
Without exaggeration, One Tough Bastard is one of the funniest stories of the 21st century.  This is everything that an homage to an era should be.  When it comes to the typical “retro nod” project, there’s an inherent risk in becoming too self-aware, putting too much focus on “the flaws of a bygone era” or leaning so closely to one movie’s example that there isn’t enough originality in the overall presentation for the intended audience not to instead stick with the genuine article.  Adam Howe manages to dodge all three potential pratfalls with One Tough Bastard in the same way an action hero might slalom down a mountain being chased by ninjas on snowmobiles, probably while blowing them up with dynamite… lit with his cigar.  There is vast deference to the action hero archetype of the ’80s and ’90s, and even with an acknowledgment of Shane Moxie as a narcissistic imbecile, jealous of a spotlight stealing simian, he is written in a way that still makes it all but impossible not to love him.  It’s always all about him, personality and charisma dialed up to the max, and the world changing around him shouldn’t – and doesn’t – change that.
One Tough Bastard is a kaleidoscope of a meta retro action comedy buddy cop plot, with a protagonist equally as stylish.  It combines all the key elements of the action hero era and puts them into one original package that makes for source material all its own.  If it is treated with the same amount of respect and effort as Adam Howe has done here, a film adaptation could easily become the greatest of any throwback to this era ever created.  Will anyone take that chance?  Well, if Copsicle could become such a smash hit in the story’s universe, then The Mox would challenge any prospective producer and director to stop being a pussy and do it.