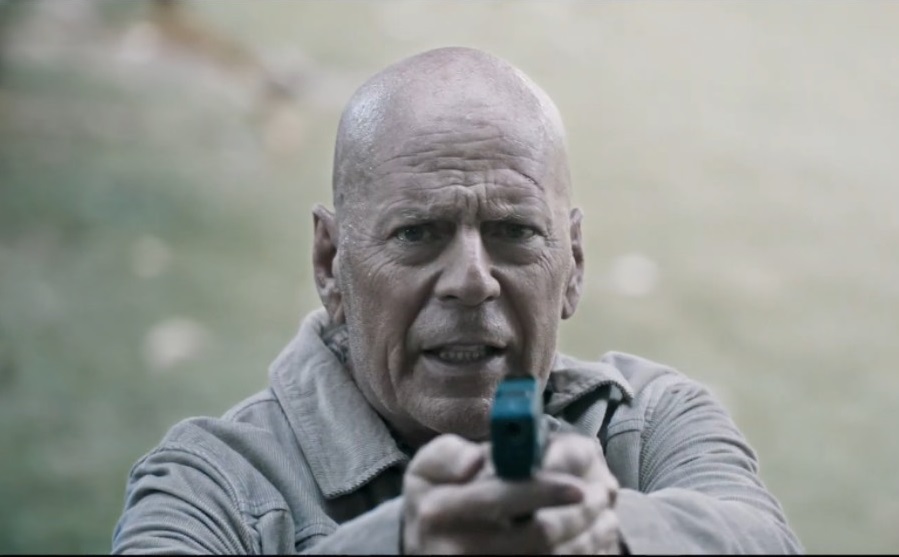 The Steven Seagal-sounding title might be interesting to some but it’s mainly a like it or hate it forest survival and crooked cop mash-up film rather than a straight up Taken/Die Hard clone. Bruce looks interested for once after a streak of unengaging, lazy-eyes roles but is still a secondary character. A mild rental for undemanding Action-Crime movie fanatics.

Review: Just about EVERY Action movie star is doing the limited release/video on demand/Netflix streaming route these days: Bautista, Seagal, Jai White, Neeson, Dacascos, Travolta, Whitaker, De Niro, Banderas, Kilmer, Pacino, Couture, Mamoa, Cage, Daniels, Goss, Cusack, Van Damme, Roberts, Lundgren, Snipes, Berenger, Adkins and now every single Planet Hollywood member. The reason we remember Willis in these films more is either because most of his films are rushed cameos, because Arnie didn’t do this as much and Stallone only really did a few of these with the same producers as Willis. Now, Arnie is considering some Netflix shows that are homages to his earlier gems, Stallone is always unpredictable and Willis seems keen on remaining here and only doing occasional mainstream ensemble work like Motherless Brooklyn, Looper, Glass and RED films once in awhile.

So does this film blow chunks or does it make for a simple undemanding hour and a half? Will it appeal to fans of the cast and genre or be more boring crud to fast-forward thru?? Was music and electronic press kit supervisor Mike Burns going to be at least decent in his time in the director’s chair??? Bruce has previously done a similar movie like this (that time as the bad cop) called First Kill which was rather fun despite the main star being the lifeless Anakin Skywalker actor from the Star Wars prequels and every other bad film of the 2010s. That one has elements of The River Wild, Training Day and A Simple Plan and THIS film is more like the Clint Eastwood ‘70s film The Gauntlet while serving as an excuse for co-star Jaime King to kick some ass (she previously was in the Escape Plan sequels, which were by the same producers).

I found the beginning a tad slow at first but the banjo rock score was very engaging, edits looked solid and despite the trivia claiming that the production was rushed, it didn’t look like it was all done in one take. The bad cops all had their intriguing quirks with the two deputies stealing drugs from dealers while trying to sneak in some drug snorting whenever they can; and the sheriff was shameless in how ruthless he wanted to keep reminding his deputies to keep putting up reelection signs for his office while reminding them to not get caught doing whatever they were doing. It’s clear from the get-go that the filmmakers are huge Quentin Tarantino fans from the chapter title segments to the raunchy dialogue. Jaime even looks similarly framed like Uma Thurman from Kill Bill at times! The film isn’t original but it is lively. As original as it gets is with how it incorporates Jaime’s hiker character and using that to survive the two bad cops’ wrath as well as Bruce being an widowed ex-cop who has no real jurisdiction but can’t stand to see people of a profession he used to be a part of abusing their power. But the film mainly belongs to the two deputies as the female cop wants to not break too many rules yet is still clumsy and full of shot while the male cop has no problem murdering as long as he does some spotting for witnesses prior. This just isn’t any of the character’s best day but the film embraces these violent outcomes without being tedious or too overlong. Later on, it actually gets more twisted to see the Sheriff get more impatient and finally decide to frame the witnesses for another easily avoidable violent outburst. The film is def better suited for Crime Thriller guys but it’s refreshing to see a film like this avoid politics while not pretending to be anything else while having the antagonists be blunt instead of hammy caricatures. Really, all this needed more of were some car chases or more drug dealers wanting in on the action because one of their own got his precious goodies stolen but I guess that would had gotten a tad too over plotted for a short running movie. Enjoy the escapade on streaming sites like Hulu or don’t but this is def not a typical Travolta/Seagal snoozefest.