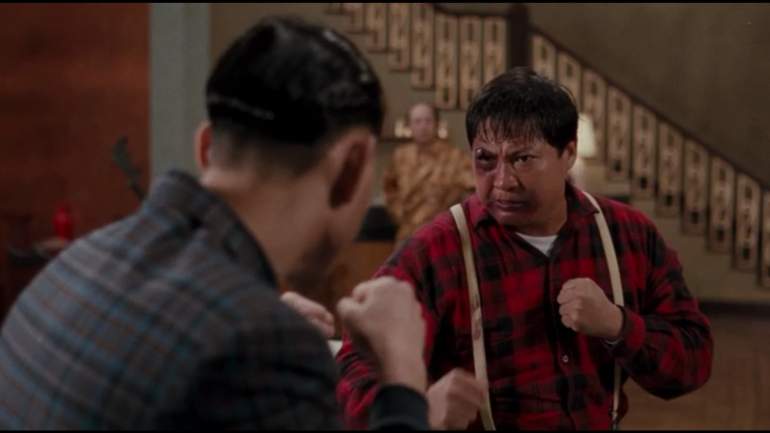 Warner Archives pulled a rabbit out of the hat when they quietly released Pedicab Driver to DVD-on-demand, and the movie is pretty good, though stacked full of sleazy subplots and uncomfortable situations.

Plot: Lo Tung and his friend Malted Candy, pedicab drivers working the streets of Macao, have both fallen in love. The problem is that both their objects of affection – one a baker, the other a prostitute – are working under cruel and lecherous bosses. Somehow, the pair must find a way to win the ladies’ hearts and free them from their unpleasant jobs.

Review: In 1930’s China, two pedicab (bike taxi) companies are in direct competition with each other. Lo Tung (Sammo Hung who also directed) is the boss of his group of drivers, and his buddies range from good-hearted to horny scoundrels, and they’re all looking for love. His friend Malted Candy (Siu Chung Mok) falls head over heels in love with a reserved pretty young woman named Hsiao-Tsui (Fennie Yuen) whom he gives a ride to temple for worship, and he can’t help himself from wanting to get to know her more and spend as much time as possible with her. Lo Tung accidentally saves the life of a pretty baker girl named Ping (Nina Li Chi) while she’s being accosted by a group of gangsters whose scuzzy leader wants to make her his concubine, and as a result Lo Tung – despite his insecurities as an overweight screwball – thinks he’s got a chance with her, and surprisingly she likes him.

He even defends her honor at a gambling den where he’s forced to fight the gambling boss (played by Chia-Liang Liu), and their extended fight is pretty snazzy and brutal. Later, when his pal Malted Candy finds out that the girl he’s in love with is a slave forced to prostitute herself, the dynamic between Lo’s group of buddies shifts radically when it’s revealed that one of their own pedicab drivers recently paid to have sex with her. In the midst of danger from a group of thugs and some high melodrama, Lo and his friends must take revenge for the death of one of their own and regain the honor of their fallen compatriot.

Long unavailable to home video in the U.S., Warner Archives pulled a rabbit out of the hat when they quietly released Pedicab Driver to DVD-on-demand, and the movie is pretty good, though stacked full of sleazy subplots and uncomfortable situations. Sammo, who directed and co-wrote the film, is as physically agile as ever despite his heavy looking frame, and he tries to get in as much slapstick comedy as he can while he douses the flames of depressing drama, while retaining a kung fu essence that really defines the movie. The film has two standout fight scenes – both with Sammo in the center – and fans of his will need to get around to watching this at some point.