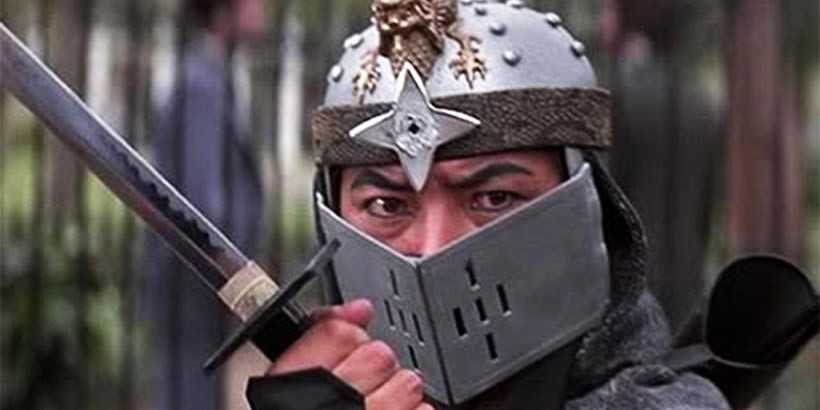 Arrow’s Blu-ray of Pray for Death is a beautiful thing. Savor it.

Synopsis: After a peace loving Japanese immigrant and his family become victims of a crime syndicate, a master ninja emerges.

Review: A successful Japanese businessman named Akira Saito (Sho Kosugi) hides the fact that he’s a ninja from his wife and children, and when his wife suggests that they move to America to start a business, he agrees. Relocated to Houston, Texas, they try opening a shop downtown, but some dirty cops hide a priceless bejeweled necklace in the shop before Saito bought the storefront, and when they come looking for it, they begin harassing him and his family for it. The mafia, meanwhile, is also after the necklace, and they send their hitman, Limehouse (James Booth), to intimidate Saito, who isn’t having it. He goes to the police, but gets no help from them, and when he’s pushed even further – when his wife and one of his sons are targeted and injured – he has had enough of the bureaucracy and dons his ninja garb on and handles things his own way … and the streets of Texas will never be the same!

Sho Kosugi is undoubtedly the ninja of the 1980’s, and Pray For Death, which followed his days at Cannon, is right in line with his more famous ninja films Enter the Ninja, Revenge of the Ninja, and Ninja III: The Domination. He designed the weapons used in the film, and there’s plenty of “R” rated ninja carnage to fill at least one other movie. In a notable scene, another ninja slips on a sword and dies. It’s just that kind of movie. Kosugi’s real-life sons Kane and Shane appear as his sons in the film, and Kane gets in on some of the best action. Peggy Abernathy sings the memorable theme song “Back to the Shadows.” Gordon Hessler, who directed, would work with Kosugi several more times. Their next one was Rage of Honor.

Arrow Video has pulled out all the stops for this integral release. They’ve culled together some unrated footage from a German 35mm print and spliced that material back into the film, presenting the most complete version of Pray for Death the world has ever seen on home video. While those unrated scenes are a little darker than the rest of the film, they do offer a much harder and more gruesome version of the movie. If you’d prefer watching the original “R” rated cut, you can watch that version on the disc instead. Either way, this Blu-ray disc is a massive upgrade from the MGM DVD-on-Demand disc that came out a few years ago. Other special features on the disc are two on-camera interviews with star Sho Kosugi. One of them is an archival interview from the 1985 premier of the film, and the other one was recently conducted for this release. Watching and listening to Kosugi talking about his career was a really great treat, especially for this fan that has always wanted to do an interview with him. All in, Arrow’s Blu-ray of Pray for Death is a beautiful thing. Savor it.