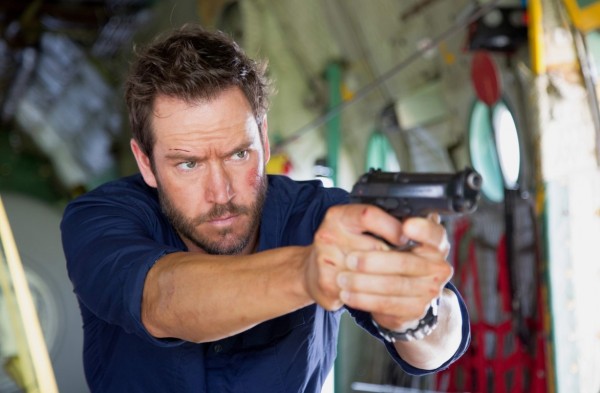 If you are looking for a fun, lighthearted action film that plays somewhat like an episode of Burn Notice, then Precious Cargo is for you.

Plot: After a botched heist, Eddie (Bruce Willis), a murderous crime boss, hunts down the seductive thief Karen (Claire Forlani) who failed him. In order to win back Eddie’s trust, Karen recruits her ex-lover and premier thief Jack (Mark-Paul Gosselaar) to steal a cargo of rare precious gems. But when the job goes down, allegiances are betrayed and lines are crossed as Jack, Karen, and Eddie face off in a fateful showdown

Review: As far as smaller budget action films go, this one is pretty good. I have seen a few reviews online totally slating it but don’t be fooled – this is quite fun, thanks mostly to Mark-Paul Gosselaar. He has come a long way since his Saved By The Bell days and his dramatic turn in NYPD Blue along with his bad guy role in last year’s actioner Heist, make him a perfect choice to be the wise-cracking action hero. Kudos also go to the main henchman Daniel Bernhardt who brings a lot of fun to his role and is allowed to be more than just the unstoppable bad guy. As with the rest of the current batch of films with Bruce Willis, his appearance takes up the least screen time and more than likely the most payroll. He has maybe 10 minutes of screen time and for most of that he just looks bored.

The story is not anything we haven’t seen before in a combination of several films, but there are enough twists and turns to keep it interesting. Gosselaar and his assembled gang of bank robbers are really quite entertaining, with Gosselaar himself doing the majority of gunplay, hand to hand combat and wisecracks.

Precious Cargo is based on the short film of the same name by writer/director Max Adams, who makes his feature debut here. Although not perfect, it is clear that Adams has a good eye for action and the ability to get the most out of his actors, with the exception of Willis. (You will recall in our interview with Scott Mann he spoke about having completed this film and how he had the ‘displeasure of working with Bruce Willis’, so this comes as no surprise).

Overall if you are looking for a fun, lighthearted action film that plays somewhat like an episode of Burn Notice, then Precious Cargo is for you.