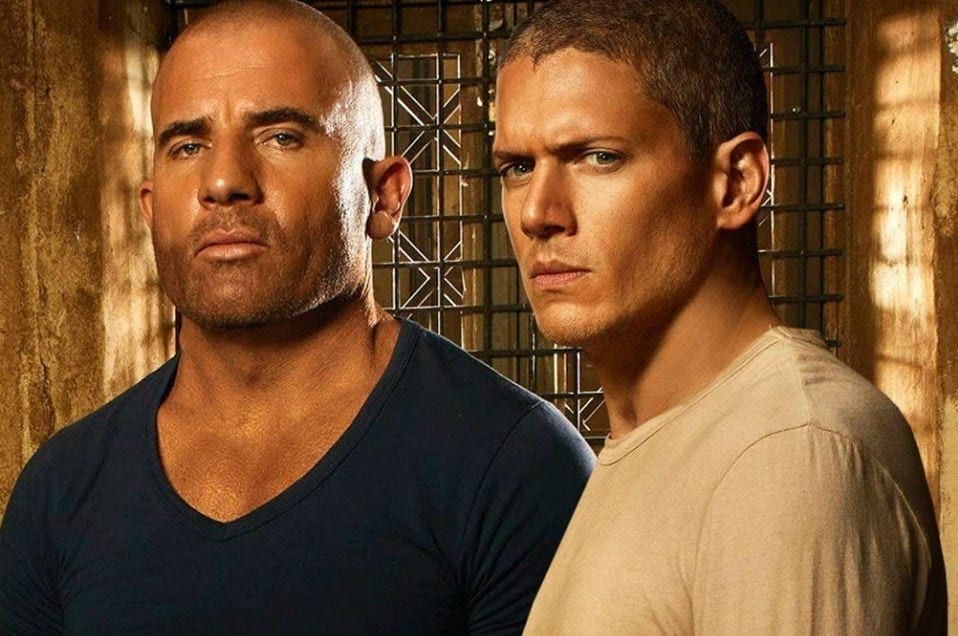 Plot: Lincoln Burrows (Dominic Purcell, John Doe) has been framed for the murder of the Vice Presidents brother, and is now awaiting execution on death row. Lincolns brother, prison designer Michael Scofield (Wentworth Miller, Dinotopia), believes him to be innocent and makes it his mission to deliberately get sent to the same prison as his brother, and break him out before his anticipated execution.
However, while inside, Michael discovers a massive conspiracy that is determined to see Lincoln’s sentence carried out.
Season 1 Review: There’s a good reason this show is cited by it’s creators as well as critics as a mashup of The Great Escape, 24 and The Fugitive. The show rises above accomplished prison shows like Oz and never caters to being a trashy B-movie type format either (not that that’s never welcome, its just that it has much higher ambitions). It is a non-stop emotional, suspenseful and explosive adrenaline rush that warrants (no pun intended) your attention due to raising enough stakes for everyone, even the viewer’s own ethics as its going to pose lots of open discussion when its not making you break a sweat.
The Chicago setting also adds a cool layer to the proceedings and the story itself honestly gives twisted films like The Usual Suspects and even shows like 24 a run for their money. It’s also instantly rewatchable since there are so many layers and story  arcs to the proceedings.
Wentworth Miller makes for an excellent newcomer and it’s a shame he didn’t get even more attention as the years went on. It’s easy to mistake him as a younger Bruce Willis given the amount of humanity he brings to the character and the Die Hard type survival skills he’ll pick up along the way as the series progresses.
5/5 stars
Season 2 Review: Here the show stumbles a bit and how could it not? It had so much to try to outdo regarding the instant classic that was the first season, and thus begins the part where the show is now outside the prison (its either in or outside often once a season).
This season stumbles at first by paying far too much attention to either less interesting or annoying supporting prison escapees. But once it starts focusing on the brother’s mysterious backstory and the devious Special Agent Mahone (played by a career-best William Fichtner of Armageddon fame), it truly finds it’s voice. This is where the show makes it clear that loads more implausible actions will occur but it’s still fleshed out enough to demand that you stick with it.
3.5/5 stars
Season 3 Review: This season, we have new shady government agents in a near flawless conspiracy. We’re also once again back inside a prison, and comparisons to the likes of Midnight Express, Bourne Identity and Manchurian Candidate are not unwelcome.
The show plays it smarter this time by seeing how further life can be complicated for all of our protagonists, some who have split up by this point only to be facing their own personal battles. The filmmakers know that the biggest nitpicker will have given up watching at this point so they go on the best possible course by  making this different prison environment have entirely different rules, setting and consequences.
The character evolution for all parties is really spectacular here, most notably because of the numerous obstacle courses where the various peers have to force themselves to trust the most unlikely allies. The new villains take awhile to warm up but their final segments by season’s end merit their inclusion in this franchise.
4/5 stars
Season 4 Review: By far, the best of the seasons that followed the very first one. This season is once again set outside a prison and continues the countless plot twists and edgy scenarios that Season 3 welcomely brought to life, only to either give those subplots more to do, or by wiping the slate clean only to replace them with bigger conflicts. This season truly reminds one of shows such as The Equalizer, even coming off as a low-rent Mission: Impossible to sum it up.
It helped that they gave it a full season order as thus show needed all the time to keep thrilling audiences and give, at the time, a final resolution. After all, you literally can’t sum up this show’s storylines in a few sentences, nor without spoiling it or killing someone else’s enjoyment of it.
For what was to be the last of the show at the time, this season threw all it’s cards into the deck and allowed countless entertaining moments to occur as a result.
5/5 stars
Season 5: It was only inevitable in the post-TV streaming age that with all the numerous shows returning to the various small screens that this was one of many that was given that chance. This time, the remaining survivors are given another shocking reveal: that one of them might still be alive, only in a prison in Yemen!
This 9-episode season is brilliantly interpreted by director Nelson McCormick’s crew and given a welcome plot line refresh by creator Paul T. Scheuring’s writer’s room by realizing new character obstacles. It helps that they brought back some fan-favorite supporting characters to compensate for others missing in action. It becomes far more better realized as the season’s mid-section moves the action further outside the prison (making this the first season to be both in and outside!).
Tears will be shed, excitement is once again never ending and by this point, the legacy of the show and its place in pop culture is undeniable.
4/5 stars