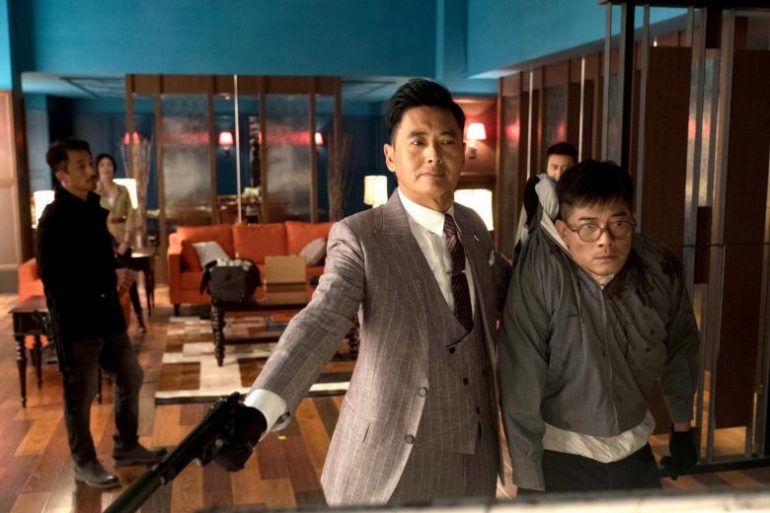 Project Gutenberg has its moments but the action is underwhelming, it’s too long and I can only really recommended for die-hard fans of Chow-Yun Fat.

Plot: The Hong Kong police hunt for a counterfeiting gang led by a mastermind known as Painter. The gang is so skillful that it’s almost impossible to distinguish between its counterfeit currency and real money. In an effort to find Painter’s real identity, the police recruit artist Lee Man.

Review: Chow Yun-Fat’s filmography needs no introduction to longtime fans of Hong Kong cinema. His films with John Woo represent the pinnacle of the heroic bloodshed subgenre of action films popularized back in the 1980s. When Felix Chong announced he would direct solo and do a throwback to Chow Yun-Fat’s roles from back in the day, anticipation slowly started to build.

Unfortunately, Project Gutenberg is better in concept than execution. The film is not bad, but overly complicated and long. Chow and Aaron Kwok give solid performances, and the role Chow plays recalls his role of Mark in John Woo’s A Better Tomorrow. Unfortunately, the shot of him lighting a cigarette with a counterfeit bill, as a reference to that film, was only used in the trailer. For die-hard Chow fans, you do get a few action scenes with a couple of cool shots, like Chow diving and blasting a shotgun, or him ejecting an empty clip right at the camera.

It’s disappointing to note that the action scenes didn’t come together very well though, and have too much noticeable CGI which unfortunately downgrades the quality. Still, you do get a brief moment of Chow blasting two guns at once, but I expected better from award-winning choreographer Li Chung-Chi. Surprisingly, the film was nominated for Best Action Design at the HK film awards, but it won’t stand up to the competition of Operation Red Sea, Golden Job and Master Z: The Ip Man Legacy!

Overall, Project Gutenberg was a good attempt for Chow Yun-Fat to stretch his acting muscles again, but the action was mostly underwhelming.