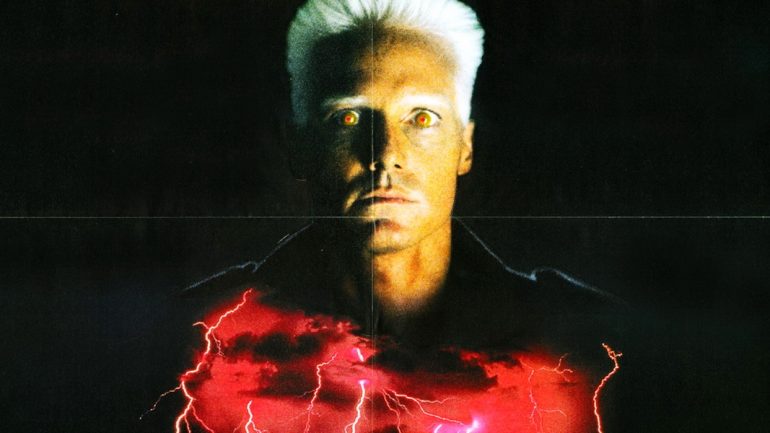 Project Shadowchaser is essentially another Die Hard knockoff but is redeemed by the addition of Martin Kove as a rare hero and Frank Zagarino looks the part as the villain.

Plot: In the nearest future a gang of terrorists takes over a hospital. They are led by a white-haired android named Romulus(Frank Zagarino) – an ASOIAF fan would say a Valyrian-looking android. The President’s daughter (Meg Foster) happens to work at said hospital and is one of the hostages. The terrorists demand they are paid fifty million dollars or they’ll execute the hospital’s personnel. Law enforcement frees a man, who is supposed to be the hospital’s architect from the cryo prison, so that he would lead a SWAT team, which is supposed to free the hostages. Yet the cops have mistaken a retired football player named Desilva (Martin Kove) for the architect. Once the SWAT team is killed off, it’s up to Desilva to defeat the bad guys.

Review: So, ‘Project Shadowchaser’ is, essentially, one of your typical ‘Die Hard on an X’ movies, you’ve seen hundreds of times before. Or more, if you dig this sort of entertainment. The movie starts off fairly innocently with a hospital attendant named Jackson (Ricco Ross) trying to score with a beautiful nurse Naomi (Kim Huffman). God, do I love awkward attempts at flirting quirky guys usually make in the action movies. When I see someone who is even worse at talking to women than I am in real life, it always boosts my self-confidence.

At any rate, neither Jackson nor his sweetheart expects what follows next – an attack on the hospital made by your typical Western Terrorists with no particular political agenda. As if an android could have had one, but that’s a question for someone, who is interested in transhumanism. Anyway, the whole reason the hostages are so special is the President’s daughter, who works as a doctor at the place. And damn, is Meg Foster whiny and annoying! I almost wanted Frank Zagarino to tear her heart out with his mechanical arm. She really is weird, unsympathetic and is useless for the better part of the movie. Two of the government’s agents represent the president during the negotiations. First one, Trevanian (Paul Koslo), is tough as nails, distrusts Desilva, but he is fair and professional. Kinderman (Joss Ackland) is a scientist, who created Romulus in the first place, and is called in due to his unmatched knowledge of the android’s psychology. Of course, what matters is Desilva’s mission, once he is freed from cryo prison – albeit, I think that his case of mistaken identity is a lame plot turn. Ackland really shines here. I really thought the man would start hiding behind the ‘diplomatic immunity’ excuse all over again.

Speaking of Desilva… You know, I half-expected one of these law enforcement guys to squint his eyes, hit the man and say in an accusing fashion something to the extent of ‘you hurt Ralph Macchio, not cool, man’. John Kreese is practically Palpatine of the eighties martial arts movies. The comparison is all the more precise with Kove reprising his role in the ‘Cobra Kai’ TV series.

‘Project’ was shot at Pinewood Studios, with most of the set used from Alien 3 (1992). Despite all of the drawbacks, the movie does have a few genuine bright spots here and there. First of all, no action movie is done without creative ways of killing off evil henchmen. Martin Kove fries the brains of one terrorist with a couple of defibrillators. That is, indeed, a good way to deal with a bad guy. Moreover, when Zagarino’s character negotiates with his creator and sole father figure, Kinderman, it is an extremely poignant moment. It is mostly because Ackland really can act – I actually have no idea how he ended up in ‘Project Shadowchaser’ – but Zagarino does look surprisingly good here as well. The man, who looks every bit as merciless and intimidating as he is supposed to be looks almost like your typical rebellious teenager, who just wants to drop his silly military toys and hide behind his dad’s back. In my honest opinion, Zagarino was generally terribly underused in mainstream action movies. While he is no main character material, the man could have played a secondary antagonist or something akin to that. He does have advantageous looks, being tall and having almost white hair. Zagarino is certainly a memorable actor. I am glad that the people learned more about him due to his role as Anton Slavik in ‘Command & Conquer: Tiberian Sun’ (1999).

So, at the end of the day, is ‘Project Shadowchaser’ a good movie, a must see? Nope. But it is your typical B-action movie; the kind you watch late at night when you can’t sleep but will likely forget about by the time you get to work the next day. At the very least, it has several good catch-phrases (‘Android, yes. Psycho, no’) and Kove screams ‘TOUCHDOWN!’ at the end of the film, celebrating his victory whilst having some beer. Actually, had he kinda hooked up with Meg Foster, this movie would have reminded me of Pearce’s ‘Lockout’. ‘Project Shadowchaser’ is, in my opinion, a mix of ‘Universal Soldier’, ‘Die Hard’ and of the aforementioned Mather’s flick. Yes, I do know, Carpenter fans, that ‘Lockout’ is an ‘Escape from New York’ rip-off, but damn, it is an entertaining one. And Maggie Grace is surely a better president’s daughter compared to Meg Foster. I’m unsure of A.J. Langer here, would love to know what you guys think.

Why do I love B-movies so much? Each and every on them has something special, something truly eye-catching, something you’d remember. Even a broken clock is right twice a day and every bad movie does something right. For me, in ‘Project Shadowchaser’ it was Zagarino and Ackland, whom I didn’t expect to turn up in this flick. And, what is even more baffling is that it somehow spawned three sequel movies. I will follow this franchise and watch said sequels, then. See you around, folks.