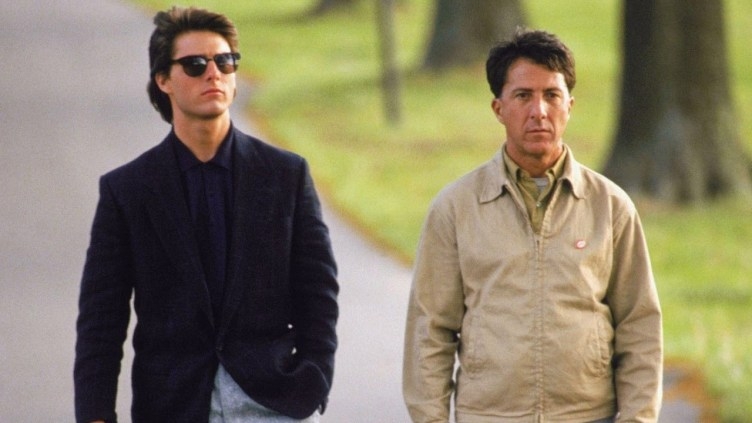 As the highest grossing film of 1988 Rain Man won a total of four Oscars at the 61st Academy Awards including the best original screenplay, the best director, the best picture and the best actor in a leading role for the amazingly talented Dustin Hoffman. The films crew also received four more nominations. This incredibly successful film also won the Golden Bear at the Berlin International Film Festival

Starring Dustin Hoffman, Tom Cruise and Valeria Golino with music by Hans Zimmer Rain Man was based on a story by Barry Morrow (who co-wrote it with Ronald Bass) and was directed by Barry Levinson.

The comedy-drama centres around Charlie Babbitt (Tom Cruise) who finds out that the father he is estranged from has died and left all of his multi-million-dollar estate to his other son that Charlie was not aware of. Not only is Charlie not aware of his brother Raymond, it turns out that Raymond is an autistic savant.

The long shot of the film is that Charlie attempts to gain custody which takes Raymond out of his comfort zone and highly structured routines that he needs to function, and because he refuses to fly then a road trip ensues.

It is during this road trip that Charlie discovers Raymond’s talent of being able to instantly count hundreds of objects at once. Raymond’s extraordinary gift is put to use by Charlie in Las Vegas by counting cards in order to get Charlie out of his financial predicament.

The game was blackjack and even though the casino bosses simply did not believe that anyone could count cards with a six-deck shoe, the brothers are asked to leave after Raymond has won a staggering $86,000.

Rain Man is the type of film that takes you along with it immersing you in the road-trip, the relationship of the two brothers as it develops and changes (for the better) and the drama of Raymond’s blackjack games at the casino.

Beating the dealer is always satisfying and there could not be a better game to do this than blackjack. Unfortunately, not all of us can get to a bricks and mortar venue but luckily there are great games of online blackjack at Fruity King – a site that offers all the action and excitement of a physical casino, but right from wherever you happen to be.

Morrow actually wrote Rain Man after he was inspired by Kin Peek who died at 58 years old in 2009. Mr Peek had almost beyond belief powers of memory, but he also suffered with severe disabilities. Some have called Peek a ‘mega-savant’ and had the amazing ability to be able to read two pages in about 10 seconds, the right page with his right and the left page with his left eye – simultaneously.

Peek was able to memorise (to the exact word) up to 12.000 books, and could tell you what day of the week a particular date fell upon going back decades, and one thing that used to entertain others at parties is that he could tell stranger the name of neighbours who used to live next door to them years ago.