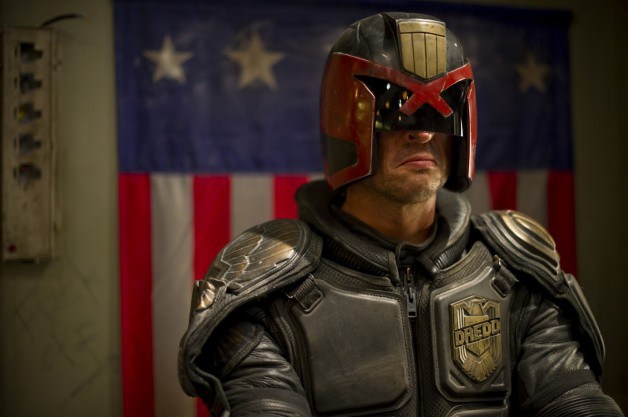 Welcome boys and girls. In this episode of Re-Action: One of them comes close to the feel of Dredd, while the other just has a feel of being dreadful.

OK, this isn’t gonna take up much of your time. The man is wearing ballet tights for god’s sake.

Let’s talk about the few things that the 95’ original did get right. Stallone is a fitting Dredd. (Even with the glowing blue contacts and leotards.) He hams it up at times, but that was par for the course during the 90’s. His supporting cast does add some credibility and class as well. Laugh if you will, but this is even without a doubt Rob Schneider’s best attempt at acting in his awful career. It’s not his fault that he was obviously hired to only be the comedy relief in a movie that has no place for comedy relief. But, the few moments when he has to carry his own he actually manages to. The sets are wonderful and the score by Silvestri, even though it may be one of his lesser is still better than most composer’s best. The chase scene with the rocket bikes is particularly entertaining and manages to be placed in the movie at just the perfect time, to prevent me from turning the DVD off in disgust.

Now onto the 2012 reboot. Who would have ever thought so, but Urban pulls off Dredd more convincingly in my opinion than Sly and it’s not just because he keeps the helmet on the entire film like he is supposed to. (Although that helped.) Although there are a few scenes in the original film that are put in there to remind us that we are watching a Judge Dredd film, it very rarely feels like one other than by name. The reboot feels like Dredd from beginning to end. The helmet, the scowl, the gun, the balls to the wall. It’s all there, the entire time. The slow mo trick is entertaining and adds to a fun ride throughout the picture. Plot; who needs a plot? Just shoot stuff into swiss cheese for an hour and a half and action fans will be happy.

Didn’t really sugar coat this one did I? This may be one of, if not THE rare occasion when most fans could agree that the second try was far superior. Ignore the poor box office reception, as it only proves what a megastar can do to help an abysmal movie from completely tanking, as was the case with Stallone’s. Urban’s is by no means perfect… unless you compare it to the original.