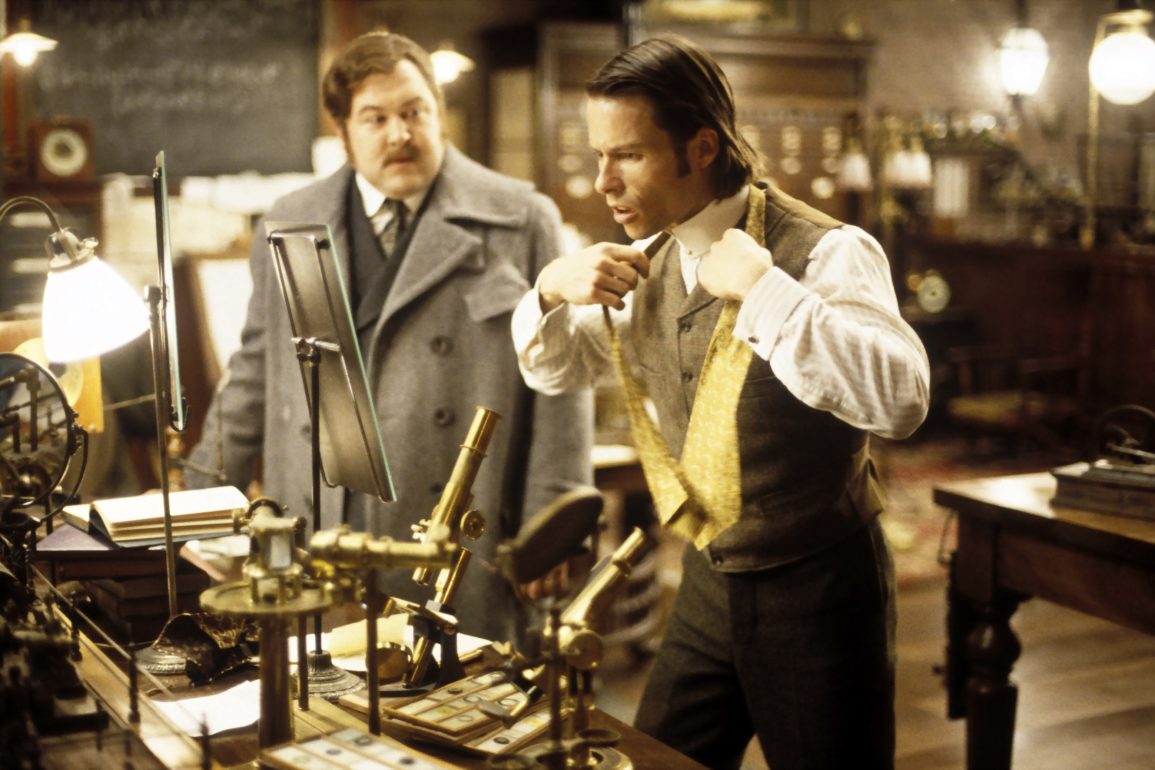 For this edition of “Re-Action” we take a look at 1960’s classic The Time Machine and its remake from 2002 of the same name.

I first fell in love with the 1960 classic H.G. Wells’ The Time Machine when I was about 9 years old and it has nurtured my obsession with time travel ever since. Many movie fans are always put off at the thought of a remake of their favorite films. But personally, I have always welcomed the notion of a different vision of a beloved story and it was no different when I heard the news of a remake of this wonderful film, taken from an equally wonderful book.

For the original Rod Taylor was an unknown at the time that he was chosen to play the films time traveler. To this day as I watch the film for the umpteenth time, it amazes me at what a seasoned veteran he seemed to be in the film. In regards to the remake, Guy Pearce is one of my favorite actors who tend to be placed in the back of the pack of elite movie stars today. But, he has such a focus on whatever character that he chooses to play, that whether it is a mad man or a broken hearted genius, he convinces me every time that he is that character, rather than just Guy Pearce playing that character. Of the love interests from each version I would have to say that without a doubt Yvette Mimieux from the original wins every time. Her innocence and joy of the simple life in the future won me over from the first time that I saw the original film and she may very well be one of my first Hollywood crushes. For some reason in the 2002 remake, it was decided that a more direct villain was needed and the creation of the Uber-Morlock is what we received. At least the casting choice helped, as Jeremy Irons plays “creepy” better than anyone. But, to introduce a main villain lead seemed to take away from the mystery and in effect the scariness of the Morlock people.

As cheesy as the make-up effects look by today’s standards, the 1960 version makes your skin crawl as the Morlocks attack, whereas the 2002 version looks pretty but not totally memorable. The sets from both films are incredible not to mention beautiful, as is the direction. The 2002 remake was Simon Wells’ (great grandson of the book’s author H.G. Wells) first and only live action film that he has directed and I will admit that for a first attempt he has a very good vision and makes a beautiful looking film.

Neither of the version’s scores is brilliant by any means. One note of interest would be the piano key theme that plays throughout the original that I can’t help but imagine that Alan Silvestri pays tribute to in his score for another time travel masterpiece Back to the Future. But ultimately, the remake’s score by Klaus Badelt does a better job of bringing out the emotion of the film. There is a chanting theme that appears periodically throughout the picture that is especially nice.

At the end of the day, for me the original is a no-brainer. I do not hate the remake, but there are parts about it that I do. The whole first 20 minutes of the movie, dealing with the time traveler’s girlfriend just seem to hurt the whole point of why the time traveler wants to go into the future in the first place. Not to mention, there are actually parts during these scenes that were meant to be emotional, but because of Wells’ lack of directing live film, I actually laughed a couple of times when I wasn’t meant to. George Pal’s original is a classic for a reason! If you have avoided it for the simple fact that it just seems to be one of those “old movies” that isn’t worth your time, you are doing yourself a disservice.

Any action fans out there that have seen these? If so, what are your thoughts?