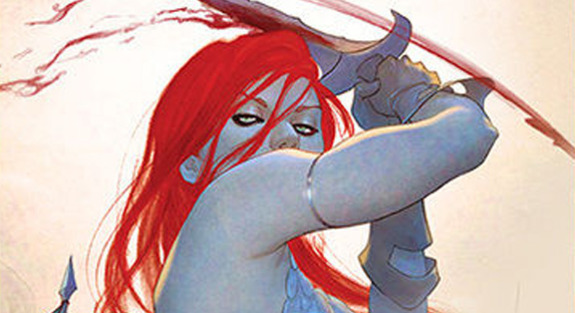 Red Sonja: Queen of Plagues is an uncommon viewing experience due to its spotty animation and choppy plotting, but that said, it’s nice to see her in some form of cinematic action once again.

Summary: Red Sonja, the She-Devil with a Sword, intends to pay back a blood debt owed to the one man who has gained her respect… even if it means leading a doomed army to their certain deaths!

Review: Long absent from the screen, Robert E. Howard’s Red Sonja’s last appearance on camera was in the TV series Conan the Adventurer (1997), opposite Ralf Moeller’s Conan in a guest appearance. She almost made a comeback with Rose McGowan in the lead role (that would have been something), but here Sonja comes with an inauspicious return in an oddly conceived “motion comic” movie. Filmed in a comic book panel style with limited animations, using voice-overs, sparse music scoring, and set to a very restrained 2D presentation, Red Sonja: Queen of Plagues has an ambitious story for such restrained means on a shoestring budget. Sonja, (voiced by a robustly performing Misty Lee), rescued from a dungeon pit, recuperates and goes to war against an old ally named Annisia, but the odds are against the She Devil With a Sword because she’s become an outcast and a vagabond after she finds out that she is carrying a plague. Doomed to wander the wastelands until she succumbs to her sickness, Sonja is aided by several intrepid female Amazon sidekicks who help her to realize that she’s been tricked into believing she has the plague. Realizing it was a ploy to get her off Annisia’s trail, Sonja comes to her full potential and rages back, her sword and fury swinging.

At only 74 minutes, Red Sonja: Queen of Plagues is an uncommon viewing experience due to its spotty animation and choppy plotting, but that said, it’s nice to see her in some form of cinematic action once again. Based on a series of comic books from Dynamite Comics (written by Gail Simone and illustrated by Walter Geovani), this effort is a mixed bag, but it’s certainly not without some quality, particularly for fans of the old Rankin and Bass-style animation (a la The Hobbit) and for those starving for animated sword and sorcery movies. Some of the animated designs of the creatures we see in this film are unique and the voice work isn’t bad. Not for everyone, but worth a look, regardless.

Shout Factory has just released Red Sonja: Queen of Plagues in a blu ray/DVD combo package, and it includes a featurette with interviews with the creators of the film.