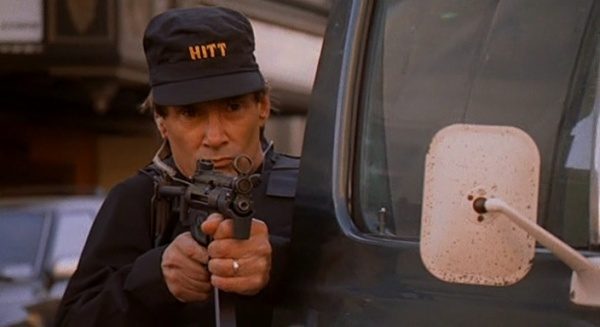 There is too much drama in Redemption and not enough fights and the potential of the cast is wasted.

Plot: John Sato (Don “The Dragon” Wilson), L.A.’s toughest cop is fired from his elite SWAT team after the accidental death of a fellow officer. Blamed by his Team (Norton, Jones) for the death, Sato becomes more and more desperate and descends to the depths of society where he becomes involved in a high stakes crime caper with the city’s top mob boss (Chris Penn). Soon he must choose between a path of greed and evil or … REDEMPTION.

Review: This movie has an unbelievable cast for all fans of b-action movies. Everybody should know the names Don “The Dragon” Wilson (eleven time world kickboxing champion and star in the Bloodfist franchise), Cynthia Rothrock (5 time world karate champion and star in many martial arts movies), Sam Jones (famous for Flash Gordon in the Flash Gordon Movie and in Ted) and Richard Norton (Star of many movies with Cynthia Rothrock, the bad guy in the Jackie Chan movie Mr. Nice Guy and right now a famous stunt coordinator in big Hollywood Movies like Suicide Squad or Mad Max: Fury Road). Also the Director, Art Camacho is known from some really solid B-Movies as a director (like Recoil with Gary Daniels) and as a stunt coordinator.

So everything is in place for a good old fashioned Kickass B Movie! But sadly the movie doesn’t deliver. It is more of a drama with not enough fights and even the ones that are in the movie are not spectacular enough. The story is pretty simple but the pacing is not the best; some parts are pretty dull. The Development of Don Wilson’s character is not very believable but that is the problem with the script. Another problem is that you can’t really blame Wilson’s character for the death of one of his teammates and you can’t really understand why his team is disappointed with him. I think the goal was that the audience is on his side, but that is not really working.

The movie takes itself far too seriously. For a B-Movie the acting is pretty solid. Don Wilson is not Al Pacino but he has developed over the years and does a solid job. Cynthia Rothrock is not used enough fighting wise (she is not in the movie for too long), but she does a pretty good job and she has just a natural charm around her. She is very likable in the movie. Norton is also underused fighting wise, but he also shows his real potential as a kind of a tweener character. Sam Jones’ role in the movie is a joke… he barely speaks and doesn’t have a single fight… a pound of meat in a vegan meeting has more value. James Russo is an accomplished actor and plays the more stereotypical role of the police chief well.

Chris Penn (who was a friend of Wilson and died way too young) looks kind of bored for most of the movie, but in the one scene where he is attacked and he insults all the attackers he pretty much steals the movie. He was a real force. But I will remember the movie for one scene in particular. It is so ridiculous it’s amazing! In the team’s first mission they have an undercover cop inside a drug gang and he seems kind of inexperienced because he is sweating profusely… in fact, he is sweating like Niagara falls… and he moves his face and body like he had a stroke or something. Nobody really reacts to that, it’s hilarious!

Overall the movie was quite disappointing. Too much drama and not enough fights and the potential of the cast is wasted.