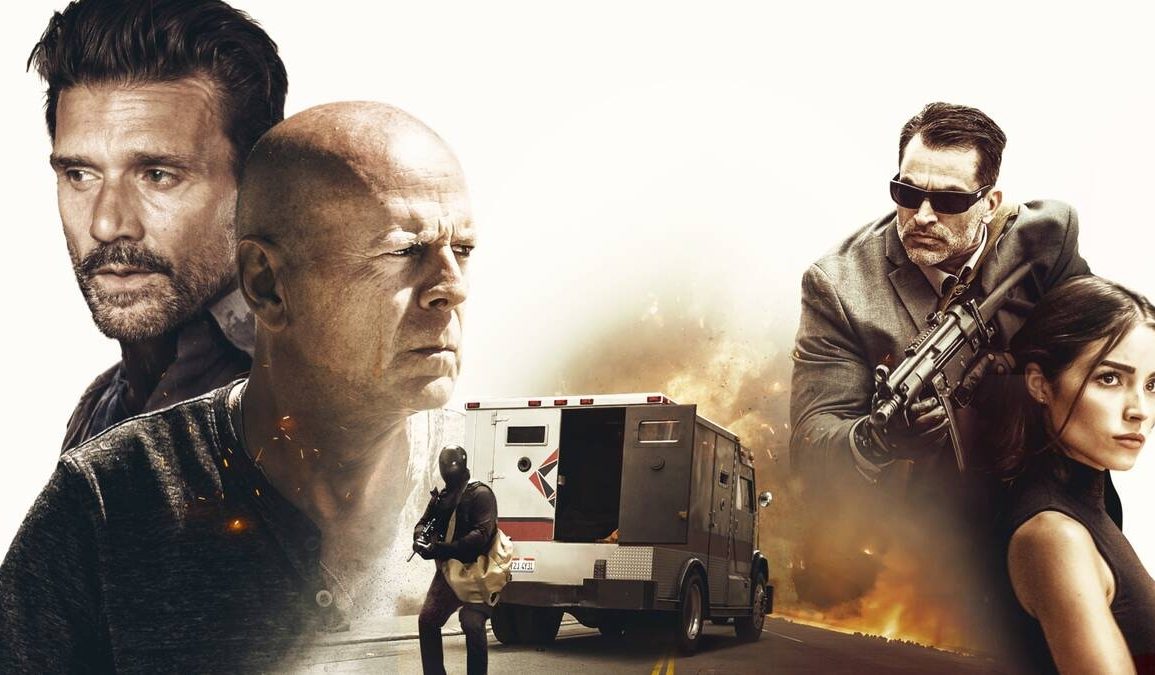 Reprisal is an absolute failure of a movie. It may not be the worst movie I’ve ever seen (it’s close), but it just might be the most uninteresting and bland movies I’ve ever seen.

Plot: An ex-cop joins forces with a bank manager to track down a highly skilled and ruthless thief. The situation soon escalates when the robber kidnaps the manager’s wife and daughter.

Review: I did it again. I fell for the ol’ Bruce Willis charm. I just can’t quit him. Despite the fact he has made 25 movies since Cop Out in 2010 and only 3 of those are at least decent (Looper, Moonrise Kingdom, and Death Wish), I have held out hope. I have stood strong and insisted that somewhere inside the bored looking old man that has been sleepwalking through movies and claiming to be Bruce Willis, is the old Bruce. The Bruce that made his name in action movies, but was always so much more. The Bruce that made himself a more interesting and more complex actor than his tough guy counterparts by taking chances on roles that challenged his abilities. The Bruce that had the ability to elevate a mediocre movie with his energy and charisma alone. I want that Bruce back! Hell, I don’t even need a great movie, I would settle for a bad movie in which he simply gives some effort; ANY sign that he still cares. Reprisal is the first movie I’ve watched of his that makes me seriously doubt we’ll ever get that version of Bruce back.

Reprisal follows Jacob (Frank Grillo), a bank manager that is haunted by the robbery of one his banks by Gabriel (Johnathon Schaech). Jacob decides the only way to get rid of his nightmares is to bring down the robber with the help of his retired cop neighbor, James ( Bruce Willis). Now, that’s not an original plot, but it’s not so bad that it can’t be made into a good movie. Stories don’t necessarily need to be original in an action movie or a thriller. Solid directing and committed acting can make up for a lot of plot deficiencies. Unfortunately for me, and anybody else that makes the mistake of watching this, Reprisal has neither of those.

Reprisal is the latest movie from director Brian A. Miller, so it shouldn’t surprise anybody that it’s garbage. This is Miller’s 7th movie and not one of them is anything other than complete trash. Every single one is a slow, cliche ridden, boring movie that gives zero hint that Miller has any talent behind the camera. His lack of talent when it comes to visual storytelling sucks the tension out of the action scenes and makes them feel tedious and uninspired. I shouldn’t be bored watching shootouts or chase scenes (Especially when Bruce F***ING Willis is a part of them!) but, thanks to Miller’s amateurish camerawork, which includes way too many poorly executed handheld shots, I am.

This guy must know some dirty secrets about somebody in Hollywood. I can’t come up with anything else to explain how he keeps getting work. Not only does he keep getting directing gigs, he keeps getting to direct talent that is way too good for his work! He has directed Dave Bautista, Stephen Dorff, Stephen Lang, James Caan, and Thomas Jane. He even has a movie coming out with Sylvester Stallone! How does that happen? This is his third movie with Bruce Willis and he has a fourth on the way. Why, Bruce, WHY?!?!

The acting in Reprisal is pretty bland across the board, and that’s discouraging considering the cast. I know that it’s not fair for me to blame a director for bad acting performances, but I’m placing at least SOME of the blame on Miller. I mean, it can’t be a coincidence that he consistently has actors known to be decent, and actors known for their charisma, and gets awful performances from them that make them seem like they would rather be doing anything else.

I watched Reprisal because of Bruce Willis, obviously, and I was extremely disappointed. For most of the movie, it was the same Bruce we’ve seen in nearly every movie of his in the last 10+ years. It looked like he was there to collect a paycheck, and he was giving minimum effort. There were a few scenes, however, where it seemed like he was actually trying and those were even more disheartening because he was downright awful. It was as if he has completely forgotten how to act. His line delivery was awkward and he seemed completely unnatural. For the first time I can remember, Bruce looked like he was actively trying to act, instead of naturally being the character. The rest of the cast wasn’t much better.

I chose to watch this because of Bruce, but my optimism that it might be good was because of Frank Grillo. He has played some badass, albeit small, parts in well known blockbusters (The Grey, Captain America: The Winter Soldier, The Purge: Anarchy) while establishing himself as one of the most reliable and likeable action stars with consistently great performances in lesser known, low-budget action movies (Beyond Skyline, Wolf Warrior 2, Wheelman). Given his track record, I figured there was no way this movie couldn’t be enjoyable. His performance would make it watchable. I was wrong again!

I wouldn’t say Grillo was bad. It’s just that he too seemed bored to be a part of this movie. He typically has a screen presence that seems to give his scenes a sense of energy just by him being there. That wasn’t the case here. He wasn’t able to inject any life into his character in the slower “dramatic” scenes, and even his action scenes seemed dull. This wasn’t entirely his fault, since this script is one of the worst I’ve ever seen, but some of the blame needs to be put on his shoulders.

Johnathon Schaech plays Gabriel, the main villain of the movie and he is not a good character at all! Schaech mostly acts in TV series and low budget action movies. He doesn’t have much range, and in Reprisal he plays the same angry, mean guy he plays in mostly everything he’s been in. This is his 3rd movie with director Brian Miller, which can’t be doing much to help his career. The only movie I’ve enjoyed of his is Marauders, and I’ll admit he was ok in that one. Other than that, I can’t say he’s ever been very good.

In Reprisal he had his work cut out for him from the beginning because he was given absolutely nothing to work with as far as his character goes. I still have no idea what was going on with this guy. All we get to see him do is threaten people and rob banks, and we never get any explanation for why he’s doing either one.

That brings me to the writing. I’m not sure which is worse in Reprisal, the director or the writer, Bryce Hammons. This is easily the most poorly written script I’ve ever watched. If you need further evidence that Hammons is awful, just go watch his other movies which include. . . . . Oh wait!! He’s literally done nothing else! I guess that would explain why the characters are all walking cliches that make zero sense and have no reason to do any of the things they do. Take Grillo’s character, Jacob, for instance. I understand why he’s upset after the robbery. I understand why he would feel the need to figure out who the bank robber is. What I don’t understand is why, once he figures out the identity of the robber, he doesn’t go straight to the

police! Are they crooked? Does he suspect they won’t bother to help him? Maybe he thinks they are involved somehow? I have no idea because this is never explained.

There’s also a scene where Gabriel’s father is freaking out in a nursing home for some reason (Alzheimer’s? Dementia? Old age? How the hell should I know. The movie doesn’t bother to explain anything!) and the nurses are attempting to calm him down. The nurses seem to be doing a great job of attempting to talk to him and calm him down, but you would think they were taking a Louisville Slugger to his kneecaps the way James reacts. He swoops in, grabs his father, then proceeds to tell the nurses he’ll come back and kill them if they mistreat his father. Mistreat him? Easy, Psycho, they were just doing their job!

That scene is not only idiotic, but it’s completely useless. Why are we being shown this? Is it supposed to develop him as a character? It doesn’t. Maybe this is why he’s robbing banks? To pay for his father’s nursing home? Could be, I guess. The movie doesn’t ever mention this if that’s the case, and nothing is ever brought up about his father after this point. I honestly have no idea why this character does anything he does throughout the movie. It’s a horrible villain, and it’s made even worse with poor acting.

There’s no way around it, Reprisal is an absolute failure of a movie. It may not be the worst movie I’ve ever seen (it’s close), but it just might be the most uninteresting and bland movies I’ve ever seen. I don’t recommend it to anybody and I don’t ever want to see another Brian Miller movie again (I don’t want to, but I will. It’s not like I’ll be able to resist his next movie with Bruce in it).