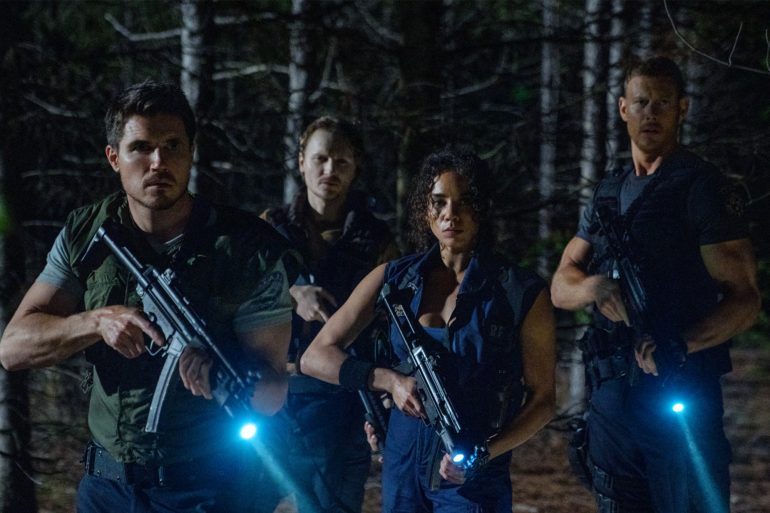 There is little to enjoy with Resident Evil: Welcome to Raccoon City but die hard fans of the video games may find more to like than I did. The CG is awful and some of the characters are just plain annoying so I would stick with the games instead.

Plot: Once the booming home of pharmaceutical giant Umbrella Corporation, Raccoon City is now a dying Midwestern town. The company’s exodus left the city a wasteland with great evil brewing below the surface. When that evil is unleashed, the townspeople are forever changed and a small group of survivors must work together to uncover the truth behind Umbrella and make it through the night.

Review: I haven’t actually played any of the games of the Resident Evil series, so when the Paul W.S. Anderson films came out I wasn’t really familiar with the material, but having said that I wasn’t a huge fan of his films whatsoever especially The Final Chapter which to me was a glorified disaster. When they announced this reboot I was rather curious how they would do it.

Well, to me this proves that even with a different director and cast behind it, they somehow still manage to be just as bad as the other ones. While I still say that The Final Chapter is significantly worse than this, this is still incredibly dull and uninteresting.

First, I’ll start with the positives. Kaya Scodelario does fine with what she’s given, as does Robbie Amell. The CG on the Licker is okay and that’s one aspect that I think this is better than the previous films is that at least looks passable.

Unfortunately, the rest just falls flat whether it’s the rest of the cast in particular Tom Hopper, Hannah John Kamen, Neal McDonough, and especially Avan Jogia whose character is incredibly irritating throughout (though I’m assuming that’s more to do with the writing rather than him.)

The story feels incredibly rushed, in particular the ending which felt as if scenes were cut in order to shorten the runtime.

The direction is lifeless, with no real tension or suspense especially once they get to the mansion. There’s also a scene that felt ripped off from Alone in the Dark (which was just baffling to be honest.)

The rest of the CGI is utterly horrendous, especially for our main villain which looked more like something you’d see in a VOD film rather than something that’s on the big screen (although, even in those films they at least had an excuse for that.)

Overall, Resident Evil: Welcome to Raccoon City was a lifeless reboot that wasted most of its cast, has a story that feels incomplete, contains some awful CGI, and feels more like something that should’ve gone to Netflix rather than theaters.