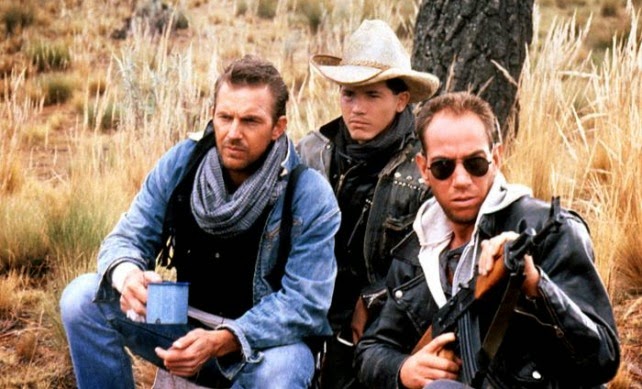 A necessary release, Dragon’s Domain’s complete soundtrack to Revenge is a treasure.

Review: Tony Scott’s ultra gritty dramatic action film Revenge, starring Kevin Costner as ex-Navy seaman Michael “Jay” Cochran often gets overlooked in favor of other films these two superstars of action cinema worked on during that era, but the fact remains that it’s a gem of a film, worthy of rewatching and enjoying all over again.

It’s a powerful film, and truly without a doubt one of Costner’s best performances, as well as one of Tony Scott’s highlights. The story is simple: Cochran (Costner) retires from the Navy and visits an old acquaintance of his: a Mexican businessman / gangster named Tiburon Mendez (Anthony Quinn, turning in a usually passionate performance), who Cochran is surprised to find has married a gorgeous young woman named Miryea (Madeleine Stowe), who immediately captures Cochran’s fancy, but their attraction is doomed, as Mendez is a calculating and unforgiving man. Ultra stylish (as per Scott’s custom) and sultry, with some action and thriller undertones, Revenge has long been held in high regard for fans of both Costner and Scott. It captures their vitality when they were in their primes, and thankfully the film is readily available to watch on several easy-to-locate DVD releases.

One of the most distinguishable elements of the film is the deeply emotionally charged score, composed by Jack Nitzsche (Starman, The Jewel of the Nile). From the first track (entitled “Love Theme”) of the brand new soundtrack release from Dragon’s Domain, Nitzsche was able to evoke a faraway, lustful longing, tinged with tragic, foreshadowed doom. From “Miryea’s Theme” to “Jeep Ride,” the tracks are flavored with Nitzche’s signature flavor as a versatile composer who used both synthesizers and traditional instruments, and there’s high, passionate energy to be found in the music to this film. Dragon’s Domain’s brand new release contains seven tracks never before released – including the much coveted “Main Title” cue that was not included in the original CD release from Silva several decades ago – and the score has been remastered and nicely produced for premium sound quality. A necessary release, Dragon’s Domain’s complete soundtrack to Revenge is a treasure.