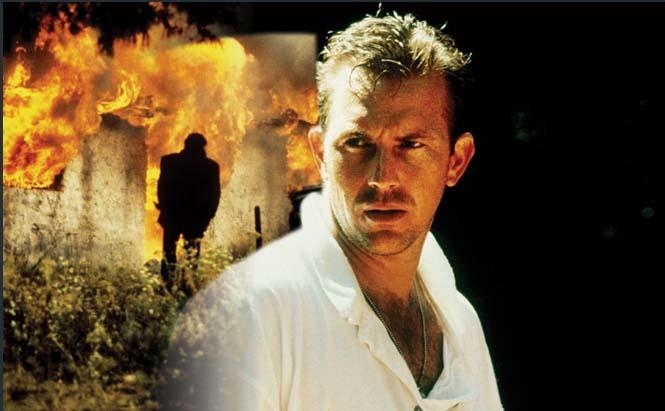 The director’s cut of Revenge is a solid thriller that has a good cast, has a pretty decent story, is well directed by Tony Scott, looks great visually, and moved at a pretty brisk pace.

Plot: A retired US Navy pilot comes to Mexico, where he falls in love with the wife of a powerful businessman. The consequences will be cruel and unforeseen.

Review: Here’s one I’ve been wanting to rewatch for some time now; last time I watched it, I absolutely hated it.  Eventually I decided to revisit this to see if my opinion will either change or remain the same.

Just to clarify, I watched the director’s cut which was more of Tony Scott’s vision.

Having rewatched Revenge now, I can say that I really liked this one, especially now that I understood what they were going for rather than what I thought this was going to be.

Everybody in the cast does a solid job with their roles, particularly Kevin Costner, Anthony Quinn, and Miguel Ferrer who are the standouts.

It is well directed by Tony Scott; his style worked for the story and didn’t get too overbearing.

While this is called Revenge, this is not a film like Death Wish or even Death Sentence; this is not a vigilante film which I actually thought it was going to be, which is why I hated it at first.

The director’s cut removes 20 minutes of footage from the theatrical cut, which in my opinion helped with the pacing of the film.

My only problem is it is a little slow in the middle, but that didn’t ruin the film for me.

Overall, Revenge is a solid thriller that has a good cast, has a pretty decent story, is well directed by Tony Scott, looks great visually, and moved at a pretty brisk pace.